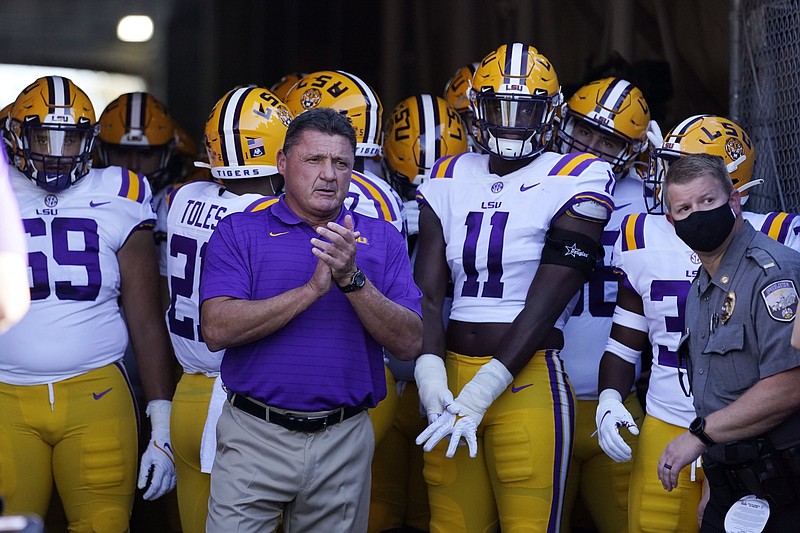 LSU Coach Ed Orgeron said he won’t take it easy on his son when the Tigers play McNeese State on Saturday night in Tiger Stadium.

Cody Orgeron, Ed’s son, is the starting quarterback for McNeese.

Ed Orgeron’s background is as a defensive line coach.

“I really think my dad’s going to tell them to get after me,” Cody Orgeron said. “It’s no harsh feelings. It’s his job to do it and it’s my job to execute. I expect them to come at me full speed and I’m ready.”

The Tigers also are looking to bounce back from a 38-27 loss at UCLA.

“Cody knows, we’re coming, man,” Ed Orgeron said. “We’re hungry. We have distaste in our belly and we’re coming, and McNeese is in our way. He understands that.”

Cody Orgeron completed 30 of 48 passes against West Florida for 367 yards and 2 touchdowns without an interception.

“I was impressed with his release,” Ed Orgeron said when asked to evaluate his son’s game. “His receivers did a great job. He extended plays with his feet.”

Cody Orgeron figures to surpass 5,000 career passing yards against his father’s team. He has passed for 4,967 yards and 38 touchdowns.

“This is Cody’s sixth year,” Ed Orgeron said. “He weighs 200 pounds now. He went there 160 pounds soaking wet. So he’s worked very hard to get where he’s at, and he’s feeling confident right now.”

Ed and Cody Orgeron said they talk or text every day, and they’re staying in contact this week even while playing each other’s teams.

“Me and Cody are best friends,” Ed Orgeron said. “So, that ain’t never going to stop.”

Mississippi State Coach Mike Leach has now led three programs to their largest comeback victories after the Bulldogs rallied to beat Louisiana Tech 35-34 after being down by 34-14 with 13:11 to play.

The 20-point comeback surpassed the largest deficit Mississippi State previously had overcome to win, 16 points, in an 18-16 victory over Auburn in 1999.

“I think we need to quit chasing those records,” Leach said. “Play well and stay ahead.”

Texas Tech rallied from down 31 points to beat Minnesota 44-41 in the Insight Bowl in 2006 when Leach coached the Red Raiders. In 2017, his Washington State team beat Boise State 47-44 in triple overtime after trailing by 21 points.

Alabama sophomore quarterback Bryce Young, making his first start, passed some pretty big names when it comes to passing in the Crimson Tide’s 44-13 victory over Miami.

Young passed for more yards (344) and touchdowns (4) than any previous Alabama quarterback making his first start.

Namath, a first-round draft pick by both the AFL and NFL, led the New York Jets to a victory over the Baltimore Colts in Super Bowl III and is a college and pro football Hall of Fame inductee.

Hurts, who finished his college career at Oklahoma, is the starting quarterback for the Philadelphia Eagles, and Jones will start as a rookie for the New England Patriots. Jones was a first-round pick this year, and Hurts was selected in the second round of the 2020 NFL Draft.

Ole Miss Coach Lane Kiffin couldn’t be at the Rebels’ opener against Louisville on Monday night in Atlanta because he was quarantining after testing positive for a covid-19 breakthrough coach.

Without Kiffin, the Rebels came through with a 43-24 victory, which resulted in a $100,000 bonus for their coach, USA Today reported.

Kiffin’s contract includes the bonus for a regular-season nonconference victory over a Power 5 conference opponent.

Auburn junior quarterback Bo Nix completed 20 of 22 passes in the Tigers’ 60-10 victory over Akron for a 90.9% completion rate that set a school record.

“I don’t care who you’re playing, it is hard to hold teams to zero points in today’s college football,” Beamer said. “To have some guys out on defense, to be a first-year staff, new defensive coordinator [Clayton White], all that, opening ball game, to have the first shutout here since 2008 … that’s pretty impressive.”

Auburn moved into The Associated Press poll at No. 25 this week after beating Akron 60-10 to open the season.

It’s the first ranking for the Tigers since late last season when they were No. 22 and lost to No. 1 Alabama 42-13.

Auburn then played its final three games in 2020 as an unranked team and wasn’t in the AP poll to open this season.

Florida Coach Dan Mullen has a 99-55 record in his 13th season as an SEC coach going into Saturday’s game at South Florida.

Mullen went 69-46 in nine seasons at Mississippi State and is 30-9 with the Gators.

At 49, Mullen has plenty of years left to pile up the victories.

“I’m going to do it at two different schools, which maybe that makes it a little bit easier,” Mullen said. “Because I think people maybe get bored of you after a while.”

Mississippi State Coach Mike Leach said he knows several members of the North Carolina State coaching staff, but he won’t be doing a lot of visiting with them before the Bulldogs play the Wolfpack.

“Be good to see them for like 30 seconds,” Leach said. “That’s about what you get. This isn’t just some wistful walk down memory lane. Maybe it would be if you didn’t have the pressure of a football game.

“I’d take them all over Starkville — ‘Hey, wait until you see this. … Have you ever had one of these?’ Trouble is, it’s 30 seconds in passing. Then you’re trying to solve problems the other team is presenting on the field.”

Mercer figures to lose big to Alabama and fall to 0-4 against the Crimson Tide when the teams play on Saturday at Bryant-Denny Stadium.

But it would be nice if the Bears could score on the Crimson Tide.

Not one, but two SEC teams will be playing in the state of Colorado on Saturday.

Wildcats Coach Mark Stoops is looking to improve the passing game, and Levis delivered in Kentucky’s 45-10 victory over Louisiana-Monroe.

Levis, a graduate transfer from Penn State, completed 18 of 26 passes for 367 yards and 4 touchdowns with 1 interception.

The Wildcats play Missouri in Lexington, and Levis figures to get a much stiffer test after the Tigers had nine sacks against Central Michigan.

The Wildcats (1-0) and Tigers (1-0) will play the year’s first SEC game and only conference matchup on Saturday.

It’s not going to decide the SEC East, but the winner will move up in the division pecking order behind Georgia and Florida, and position itself for a winning season and better bowl game.

New coordinators — Steve Wilks for Missouri on defense and Liam Coen for Kentucky on offense — will match wits.

6 for 35 — Tackles for lost yards by Missouri linebacker Blaze Alldredge, a transfer from Rice, against Central Michigan.

4 — Touchdown passes thrown by South Carolina quarterback Zeb Noland, who began the season as a graduate assistant coach, in the Gamecocks’ 46-0 victory over Eastern Illinois.

“Bring your ass on, in your sissy blue shirt!”

— LSU Coach Ed Oregon in response to a UCLA fan who heckled him before the Tigers played the Bruins in the Rose Bowl. UCLA won 38-27.

“Eli and I have built a friendship and I like him. He kicked our butt [20-10 last season]. I’m not going to forget. That’s on my mind. He had his team more prepared than I was. Maybe he’ll have some compassion for me.”

“We just need this Big Ten officiating crew to teach us how to tackle because obviously we don’t know.”

— Ole Miss Coach Lane Kiffin on a halftime interview with ESPN after Rebels linebackers Mark Robinson and Lakia Henry were ejected for targeting.