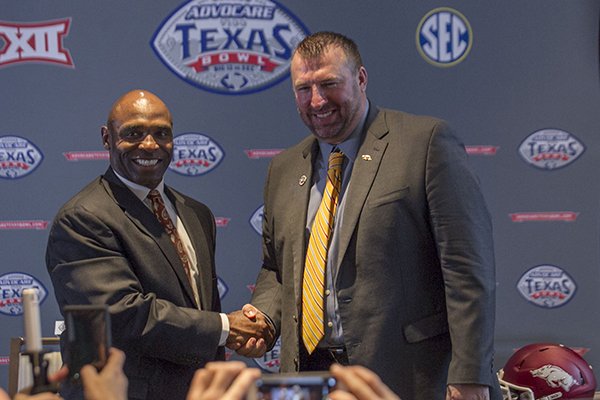 FAYETTEVILLE — Since their last clash in 2014, the Arkansas Razorbacks and Texas Longhorns keep optimistically turning corners crashed into brick walls.

One will crash into that wall again tonight, though with more than ample time for the loser possibly to recover, and the winner again to become disgruntled with its coach.

Arkansas, since Bobby Petrino on April Fool’s Day 2012 crashed his motorcycle, is on its fourth head football coach.

It marks their sixth nonconference meeting since they were often nationally acclaimed rivals in the bygone Southwest Conference.

They should meet soon within the SEC once Texas fulfills its Big 12 contracts.

Just breaking even in 2014, but still living off their storied SWC rivalry, the 6-6 Razorbacks of then-second-year coach Bret Bielema and 6-6 Longhorns under then first-year Charlie Strong matched in the Texas Bowl.

By November 2017, Arkansas canned Long and Bielema — Long in part because of the Bielema buyout.

Firing Strong, the Longhorns false-started “Texas is back” when hot commodity Tom Herman, the former Ohio State offensive coordinator and former Houston Cougars head coach, piloted the 2018 Longhorns to a Sugar Bowl upset over No. 5 Georgia.

Soon Texas backed off Herman. He was fired following a 7-3 season in 2020 despite winning five of his last six.

Fayetteville’s Dickson Street will toast Pittman into the wee hours if Arkansas wins.

Yet the winner’s joy could prove short term.

As reflected by fates of victorious-yet-fired coaches of Arkansas and Texas past, some forget those victories supposedly unforgettable.