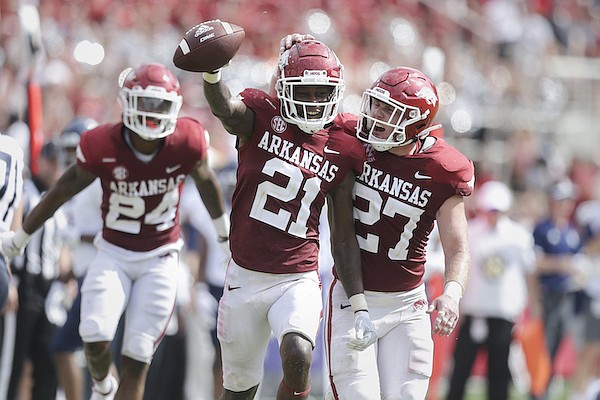 Arkansas cornerback Montaric Brown (21) celebrates with linebacker Hayden Henry (27) after intercepting a pass during the fourth quarter of a game against Rice on Saturday, Sept. 4, 2021, in Fayetteville.

FAYETTEVILLE — Tonight’s clash does not rise to “Game of the Century” status like President Richard Nixon’s presence in 1969, but any time the Arkansas Razorbacks face the Texas Longhorns it’s big.

The longest still-active rivalry in University of Arkansas football history, which dates to the program’s first season in 1894, will be renewed today at 6 p.m. at Reynolds Razorback Stadium.

The Hogs (1-0) and the Horns (1-0) will meet in the regular season for the first time since a 52-10 blowout win for No. 7 Texas in 2008 in Austin, Texas. This is the twice-moved return game to cap the home-and-away contract, and the historic rivals got it in possibly just under the wire before a coming seismic shift.

Arkansas and Texas will reunite in the SEC some time between now and the 2025 season, as soon as the lawyers work out the details of the exit of Oklahoma and Texas from the Big 12.

“I’ll be long gone by then, but pretty soon they’re stepping into this conference,” said Arkansas linebacker Hayden Henry, whose father and grandfather both competed for Arkansas against the Longhorns in the old Southwest Conference. “So this will be a little taste of what fans will get to see for years and years to come.”

“Everybody was like, ‘Well, you don’t play any more,’” Pittman said. “Certainly in the future we’re going to and certainly Saturday we do. But yeah, it’s been that way all the time.

“To be honest with you, it’s what college football’s all about. If there weren’t any rivalries, it wouldn’t be any fun. I certainly have talked to everybody from about the age of 30 on and it’s Texas.”

The Longhorns shot up six spots to No. 15 in The Associated Press poll after their 38-18 win over No. 23 Louisiana-Lafayette. First-year Texas Coach Steve Sarkisian faces the same charge as Pittman: Return his program to national prominence as soon as possible. Sarkisian has a head start it appears in overall roster talent, and the Longhorns are a 6 1/2-point favorite tonight.

The game will highlight the old Southwest Conference foes as well as project toward the SEC’s future, but only one team can emerge undefeated with momentum.

“I’m very aware of the rivalry,” Sarkisian said. “I love the pomp and pageantry and the history and tradition of college football. I think that’s what makes our game so unique and so special. I like that aspect of it. I’m the first guy, if we have down time, that turns on these rivalry games.

“I appreciate the rivalry and I love all that it entails, but from a preparation standpoint, we just go right in. Quite frankly, every opponent is a faceless opponent.”

Younger fans might recall only a few games in this series since Arkansas left the old SWC following the 1991 season. Those fans have seen Arkansas win three of five games against the Longhorns since splitting from the SWC.

The Razorbacks own the Longhorns in the bowl season, with a 27-6 victory in the 1999 Cotton Bowl and a 31-7 triumph in the 2014 Texas Bowl, but the postseason window between the two schools is closing soon, barring meetings in the College Football Playoff.

Long-time fans will recall the teams played 60 consecutive years between 1932-91 in the heyday of the SWC.

The Longhorns are still the most frequently played opponent in Arkansas football history at 78 meetings. The Razorbacks rank sixth among most-played opponents for Texas, behind Texas A&M, Oklahoma, Baylor, Rice and TCU.

The Razorbacks and Longhorns have been absorbing history lessons and game plans this week.

“I always knew that Arkansas vs.Texas was a huge deal, but it’s way different once you’re about to play in it,” Arkansas receiver Tyson Morris said. “You get that feeling yourself about how actually big the rivalry is.”

Texas linebacker DeMarvion Overshown was recruited out of east Texas by the Razorbacks, but he was locked in on becoming a Longhorn.

“The history of this rivalry is something that’s unmatched,” Overshown said. “I’m looking forward to it. I know they’re going to be loud. It’s going to get dirty, it’s going to be physical, but the fact I get to play in one of the biggest rivalries ever, I’m excited for it and I’m blessed.”

“Growing up here and watching all the games and seeing all the hype around it and how game day is in the whole state of Arkansas … around the Texas-Arkansas game, it’s always a good environment,” he said. “Pretty exciting. It’s my first time. I’m glad I get the chance to experience it. Definitely not taking it for granted.”

Sarkisian was asked about how the Razorbacks’ “hatred” for the Longhorns could make it a tough game.

“Hey, any time you get a night game and two quality opponents and you get a sold-out crowd, at what point is it tough enough?” Sarkisian asked. “They’re all tough at that point. This one’s going to be another one.

“Any time you’re playing a prime-time game you feel it,” he said. “Everybody works to play for the night games and be on big screens, so we’re definitely excited about it and we want to take advantage. This is our platform, we have the ability to go out and show what we can do so we just want to go out there and lock in our assignments and perform.”

Arkansas safety Jalen Catalon, a Texas native who was heavily recruited by the Longhorns, expressed a perspective shared by many of the Razorbacks on Pittman’s radio show on Wednesday.

“It’s a big game, but we’re just going to play our game and understand we’re not just playing for ourselves, we’re playing for a whole state, the tradition of the game and the rivalry and everything,” Catalon said.