How Arkansas and Texas compare at each position 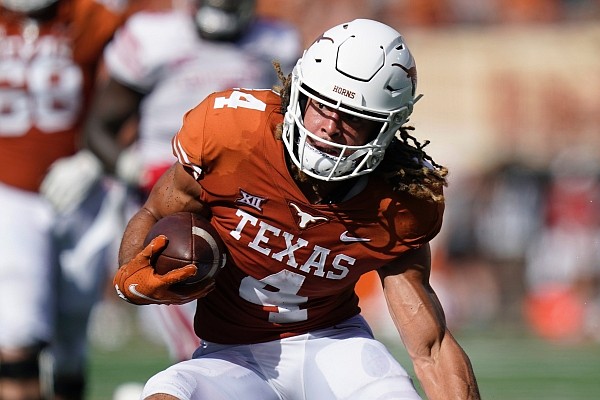 A position-by-position breakdown of the Razorbacks and Longhorns:

KJ Jefferson overcame a shaky start, with several drops, to go 12 of 21 for 128 yards, 1 TD, 1 INT. He took 2 sacks, one easily avoidable, and his pick was a forced throw. Jefferson had some slants sail high, but he settled in. With no drops he’s at 71%. His agility in the running game (9-89) might’ve exceeded expectations. Malik Hornsby did not see time in the opener. Passing efficiency (114.53) is 91st.

Bijan Robinson (20 carries, 103 yards) flashed the kind of versatility that makes superstars. The 6-0, 214-pounder had 73 receiving yards and scored twice. His 8.2 ypc last season was a UT record. Robinson’s 176 all-purpose yards is 12th in the FBS. Keilan Robinson (8-42, 1 TD) and Roschon Johnson (8-27), who had 91 all-purpose yards, give the Longhorns plenty of weapons in the backfield.

The UA wideouts should grow with Jefferson. Ace Treylon Burks (5-42) came back rusty from injury with a couple of drops. Tyson Morris (3-42, 1 TD) had the most impactful catch. De’Vion Warren (2-14) had a drop and an illegal touch wipe out potential gainers. Ketron Jackson Jr. (1-16) and TE Blake Kern (1-14) contributed. The group blocked well. Can Warren Thompson, Trey Knox, Jaquayln Crawford impact?

LT Myron Cunningham, LG Brady Latham, C Ricky Stromberg and RT Dalton Wagner played all 67 offensive snaps vs. Rice. The only subbing on the front came at RG, where senior Ty Clary (52 snaps) had a shoulder issue that led to 15 snaps for Beaux Limmer. Clary has practiced this week. The Razorbacks permitted 2 sacks, 1 which Jefferson should’ve avoided. Protection will be key vs. Horns.

The Razorbacks have gone patchwork at this spot due to targeting ejections. Texas native Bumper Pool (14, 1.5 TFL) will miss the first half due to targeting, while Hayden Henry (5, 1) missed last week’s first half. Sixth-year Grant Morgan (1) sat out most of the opener after an ejection. Andrew Parker (4, 2 hurries ) was a key contributor against Rice. Jackson Woodard (1), Deon Edwards and Chris Paul are backups.

D’Shawn Jamison had a 25-yard KOR and a 6-yard PR last week, while Xavier Worthy added an 18-yard return of a punt. Cameron Dicker is a rarity nowadays as a three-way kicker. He had 6 touchbacks on 7 kickoffs (.857 touchbacks, matching UA), averaged 51.5 yards on just 2 punts and went 1 for 2 on FGs, making from 49 yards and missing from 45. Kickoff coverage allowed a 21-yard return.

The negatives for Arkansas — a blocked punt allowed, penalties, one super short punt — overshadowed the big plusses, like LaDarrius Bishop’s 36-yard average on 3 KORs. Kickoff man Vito Calvaruso (6 of 7 touchbacks) and PK Cam Little (34-yard FG, 5 of 5 PAT) did their jobs. Greg Brooks Jr. only got half a chance on punt returns. Special teams penalties must be cleaned up.

The Longhorns will have to stir up their own momentum with a sliver of 3,8000 supporters in the northeast corner. Texas’ No. 15 ranking brings the pressure of being a road favorite. The Longhorns looked sharp in dispatching Louisiana-Lafayette, but this is only Game 2 for the Steve Sarkisian regime. The Horns have the incentive of making an impression on poll voters and SEC fan bases in their future home.

Arkansas will have the distinct advantage of massive, sellout home crowd, but can the Razorbacks do extra things to make the Longhorns sweat? Will the boos return with a poor start? Coach Sam Pittman was on the staff that oversaw a 31-7 Texas Bowl win over the ‘Horns in 2014, so he saw the spark this matchup can generate. Both teams will have wrinkles ready to unleash. Which side will handle them better?