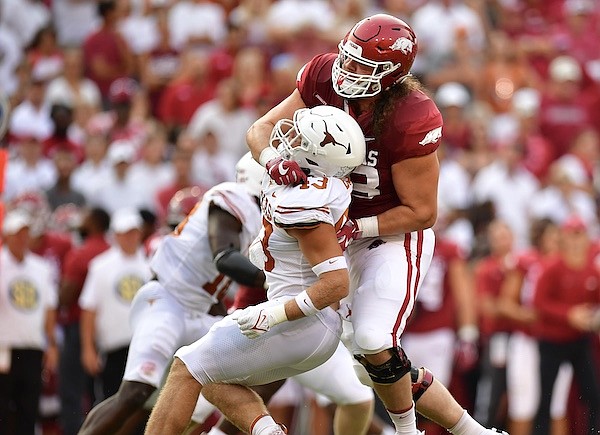 FAYETTEVILLE — Texas got a taste of football in its future home Saturday night.

Playing in front of a sellout home crowd of 74,531 for the first time in four years, the Razorbacks (2-0) dominated the first three quarters in all phases.

Arkansas led Texas 16-0 at halftime and 33-7 at the end of the third quarter.

Thousands of Arkansas fans stormed the field once the game was over, chanting "S-E-C!" as the Longhorns left the field.

When freshman running back Raheim “Rocket” Sanders rushed for a 26-yard touchdown one play following a Texas fumble late in the third quarter, the Razorbacks led the Longhorns 372-136 in total offense.

Arkansas finished with 471 yards and held Texas to 256.

The Razorbacks dodged a bullet after holding the Longhorns to a three-and-out on Texas’ first possession. Greg Brooks muffed a punt that was recovered by Texas’ Kitan Crawford at the Arkansas 4, but replay showed Crawford’s foot was out of bounds and the Razorbacks retained possession.

From there, the game was never in doubt. Arkansas scored on four consecutive first-half possessions to go ahead 16-0.

Freshman kicker Cam Little was good on first-half field-goal attempts of 24, 24 and 44 yards, and Dominique Johnson scored on a 5-yard touchdown run with 10:55 remaining before halftime to give the Razorbacks a 10-0 lead.

Arkansas held Texas to 78 yards in the first half — 39 yards passing and 39 yards rushing.

The Longhorns capitalized on their only turnover to briefly make the game competitive in the third quarter. B.J. Foster intercepted Jefferson at the Arkansas 26 to set up a 6-play scoring drive that was capped by Robinson’s 1-yard touchdown run with 10:17 left in the third to pull the Longhorns within 16-7.

But the Razorbacks responded with a 6-play, 81-yard touchdown drive that was sparked by a 45-yard pass from Jefferson to Tyson Morris. Johnson followed the big reception with consecutive runs of 19 and 12 yards, and Smith leaped over the top of the pile to put Arkansas ahead 23-7.

Little added a fourth field goal from 22 yards with 2:08 to play in the third. Texas quarterback Hudson Card was stripped by Zach Williams on the Longhorns’ ensuing offensive play and Brooks recovered to set up Sanders’ first career touchdown that put the Razorbacks ahead 33-7.

Card, a redshirt freshman, struggled in his first career road start — an 8-of-15, 61-yard passing performance that ended when he was replaced by backup Casey Thompson following the lost fumble. Card was sacked three times.

Thompson, who starred in last year’s Alamo Bowl when he threw four touchdown passes off the bench, led a pair of scoring drives at Arkansas. He finished both drives with touchdown runs, including a 1-yard run on fourth down with 2:26 remaining.

Arkansas answered his first touchdown run with an 8-play, 75-yard drive that ended with AJ Green’s 30-yard touchdown run on third-and-2. That score put the Razorbacks ahead 40-14 with 8:27 to play and sent a wave of fans wearing burnt orange to the parking lot.

Texas (1-1) was a 7-point favorite after gaining six spots to No. 15 in the AP poll this week. The Longhorns won 38-18 over then-No. 23 Louisiana-Lafayette last Saturday in coach Steve Sarkisian’s debut.

The Razorbacks won for the 23rd time in 79 meetings against the Longhorns. Texas dominated the series when the teams were in the Southwest Conference, but Arkansas has held its own since the move to the SEC.

The Razorbacks improved to 4-2 against the Longhorns as an SEC team, with their wins by an average of 18.5 points.

The teams had not played since the Razorbacks won the Texas Bowl by a score of 31-7 in 2014.

Arkansas defeated Texas in Fayetteville for the fourth time ever, and for the first time since a 42-11 thrashing of the top-ranked Longhorns 40 years ago next month. Saturday’s game was only the fourth between the teams in the Razorbacks’ on-campus stadium since then, and the first in 17 years.

Arkansas is scheduled to host Georgia Southern (1-1) next Saturday at 3 p.m. in its final tuneup before SEC play begins the following week against No. 5 Texas A&M.