'Horns humbled in return to Arkansas 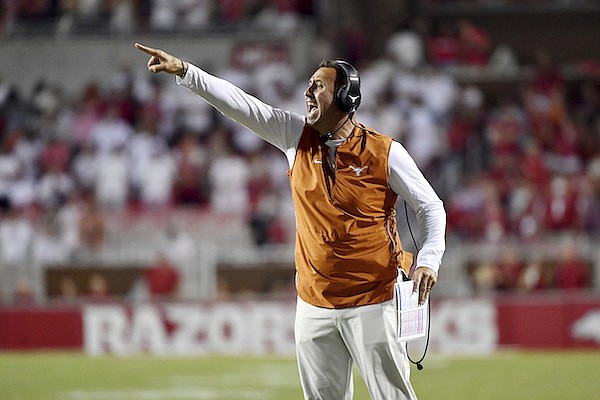 Texas coach Steve Sarkisian reacts after a call during the second half of the team's NCAA college football game against Arkansas on Saturday, Sept. 11, 2021, in Fayetteville. (AP Photo/Michael Woods)

FAYETTEVILLE — Texas coach Steve Sarkisian expected a tough, physical battle with Arkansas on Saturday night, but in no way did he expect to be dominated on both sides of the line in a 40-21 loss.

The result was Arkansas’ fifth victory in its last seven games against its old Southwest Conference rival and future Southeastern Conference opponent.

“Unfortunately, I don’t know how much of it was what they did as opposed to what we didn’t do,” Sarkisian said. “They are a good football team and I think (Arkansas coach Sam Pittman has) done a nice job with the team, but I think the majority of what happened was that we didn’t play great. We weren’t locked in as we were from an assignment standpoint up front blocking. We didn’t execute great in the pass game.”

Texas defensive lineman Keilan Robinson was asked if this was an embarrassing loss to an Arkansas program that won three games last season and had won just 12 of 47 coming into Saturday night.

“I’m not going to say that we were embarrassed, but it is was just a tough loss,” Robinson said. “All we can do is go back in the film room and actually see what actually happened....It was our fault we lost this game. We have to go back into the film room and make sure this never happens again.”

It was a far cry from Texas whipping then-No. 15 and visiting Louisiana-Lafayette 38-18 in its season opener last weekend. At Arkansas, the Longhorns had a punt blocked, a fumble deep in its own territory and were just 4 of 13 on third-down conversions.

“We had some mishaps we didn’t have last week,” Sarkisian said. “We dropped the snap on a punt. Just things happened in this game that we didn’t have to deal with last week.

"There is always your concern when you go on the road in a hostile environment and keeping your team at an even temperament that you can go out and perform, and that clearly didn’t happen tonight.”

Arkansas had 11 tackles for lost yardage.

“I think this was a big physical defensive front and I think the movement that they utilized up front caused us a few issues,” Sarkisian said.

“We are going to need to have to be better than we were tonight in our ability to run the football, especially when they played the style of defense they played, where they borderline dared us to run the ball, and we just couldn’t run it effectively enough on early downs."

Sarkisian said Texas was in third-and-long too often.

"You can’t win playing that way," Sarkisian said. "You have got to play better on first and second downs, and we didn’t do that tonight."

Arkansas led 16-0 at halftime. Texas cut its deficit to 16-7 early in the third quarter only to see Arkansas go ahead 33-7 by the start of the fourth quarter.

Arkansas quarterback KJ Jefferson rushed 10 times for 73 yards. He was 14-of-19 passing for 138 yards and was intercepted once.

“Over time, they kind of wore us out,” Sarkisian said. “We couldn’t sustain any drives offensively so our defense was on the field to a point where they just kind of wore out. I mean, 47 rush attempts? We never put in pressure them to make them feel like they had to throw the ball."

Sarkisian said his team was good enough defensively in the first half.

“We have got to get back to the drawing board,” Sarkisian said. “This was not a performance that I was anticipating, but we will find out about ourselves and what we are made of, because I really don’t believe this one game is going to define us. We have got work to do, that’s for sure.”