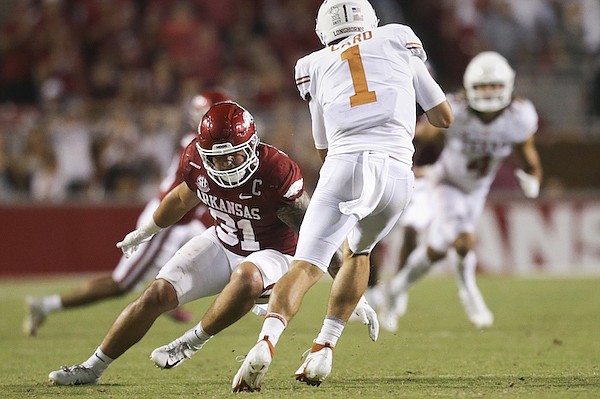 A team captain and former walk-on from Greenwood, Morgan is day-to-day this week, Pittman said, after leaving Saturday’s 40-21 victory over then-No. 15 Texas with a leg injury.

He made 13 tackles, including 2.5 for lost yardage, in the game before being helped off the field by training staff members in the fourth quarter.

Morgan, wearing a brace, participated in the team's workout Monday.

“I don’t know how he’s going to be, to be honest with you,” Pittman added. “You know, he’s tough. We’ll know a little bit more about him, how he feels, at practice today (and) as soon as practice is over.”

In an interview with KABZ-FM on Tuesday, Morgan said his injury is "nothing major."

"I just kind of tweaked my knee," he added. "Same kind of thing as last year against Missouri. I’ll be fine. I’ll wear a brace. It’s kind of day-to-day.

"Don’t worry about me at all, I promise. You know me, I’m tough. We’re getting ready for Georgia Southern. I practiced yesterday, so I’ll be all right."

Through two games, Morgan is fourth on the team in tackles with 14 and has a half-sack to his credit. He missed three-plus quarters in the Razorbacks’ season opener against Rice after being disqualified for targeting.

Should Morgan be limited or not play against Georgia Southern on Saturday, Andrew Parker, his backup on this week’s depth chart, could see an increase in snaps.