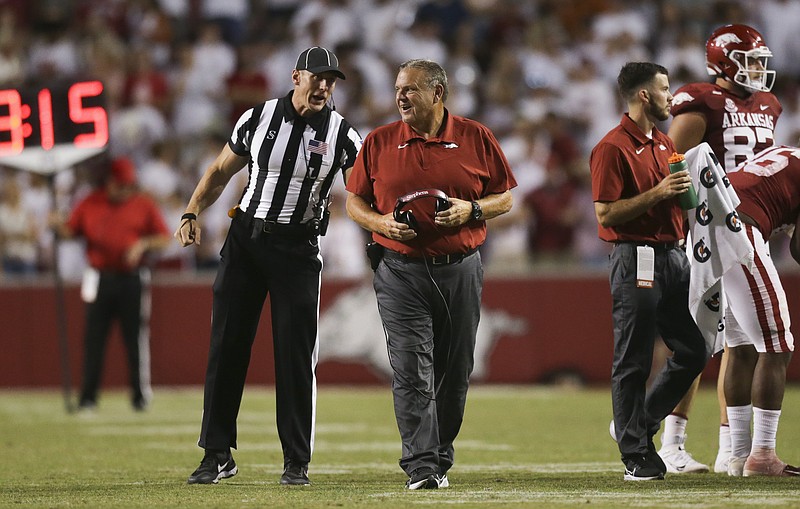 • Sam Pittman says Arkansas spent three or four days during preseason working on Georgia Southern's option package. He said he didn't feel like the team could install a defense for that in a week's time.

• Pittman said he is not concerned about his team having a letdown this week. He said the team played well last year after wins. "We have proven we can have success and then flush it the next week."

• On defending the option, Pittman said Georgia Southern has to be made to pitch the ball. The quarterback wants to run the ball, he said. "You have to be sound....It's going to be a challenge for us."

• Pittman said rankings don't mean much this time of the year, but he is pleased to see his team in this week's poll. "I think we are a top-25 team."

• Pittman credited the play of the offensive line. He said center Ricky Stromberg and tackles Dalton Wagner and Myron Cunningham stood out.

• Pittman was asked about Mataio Soli's lack of playing time. "He has to be a consistent player each down....When he does that I think you'll see him more on the field."

• Pittman said he does not know Grant Morgan's status. "I think he's more day-by-day. We'll know more about him...as soon as (today's) practice is over."

• Pittman said he did not go to bed until 4:25 a.m. Sunday. He said he hosted some people at his home after the Texas game. "You're thinking about the game and all that." Recruits came over the next morning for breakfast.

• Pittman said recruits' reaction was "giddy, excited about the Razorbacks" following the game. "I know the ones who were here, it was really cool to see their face."

• On all the cutback lanes Saturday, Pittman said it starts with the threat of the quarterback to run. "If he can get the (defender) to free...a half second in football is a big deal."

• Pittman was asked about getting more production in the passing game. He said, "If I'm averaging seven yards per carry, I'm not going to throw the ball....If I'm averaging two (yards per run), I might light it up (passing)."

• Pittman said AJ Green had a good practice leading up to the Texas game and that he has progressed since he suffered a concussion during preseason camp. He said he plans to rotate backs more moving forward.

• Pittman said right guard Beaux Limmer has earned more playing time with his "physical play....He's a guy who wants to dominate a defensive lineman. We need more of that. We need guys who want to finish."

• On Hayden Henry, Pittman said this was his first college offseason to become healthy. Pittman said he told Henry if he would come back, he would be held out during spring scrimmages, which allowed him to get healthy. He also got stronger following shoulder operations. Pittman called Henry "fearless, which is kind of scary at times, not just for them, but for him."

• Pittman said KJ Jefferson's reaction was good to the interception he threw that set up Texas' first touchdown. "That's called maturity and no panic and belief, and our entire team believes in him."