Pittman pleased with defense's pursuit to the ball 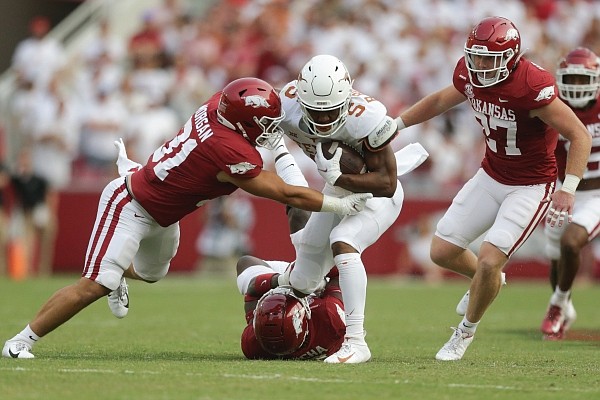 FAYETTEVILLE — As Sam Pittman graded the film from Arkansas’ rout of Texas on Saturday, he watched and re-watched his favorite play a handful of times.

It came early in the first quarter when the game was scoreless. And it began with safety Joe Foucha charging hard off the right edge of the Longhorns offensive line. Moments later, Foucha was airborne, diving toward Texas running back Bijan Robinson.

The safety got his arms around one of Robinson’s ankles and held on long enough for a host of teammates to finish the play. Robinson was dropped for a loss of four yards.

“Wasn’t that awesome?” Pittman said Monday. “That was pretty cool. He launched about five yards.”

As a unit, the Razorbacks’ defense inspired a good bit of confidence and optimism in Arkansas fans — and likely the coaching staff — with the way it pursued ball carriers and Texas quarterback Hudson Card in the 40-21 victory. The group’s physicality jumped out and players flew to the football — literally in Foucha’s case.

Defensive back Greg Brooks had just two tackles, but he charged hard at Card on a number of plays. His first hit on the quarterback resulted in a 1-yard gain along the Arkansas sideline.

Soon after, Brooks hurried Card into a throw that fell incomplete on third down, bringing out the Texas punt team. The Razorbacks blocked the kick on the ensuing snap.

Late in the second quarter on third-and-14, Card completed a short pass to receiver Jordan Whittington, a star in the Longhorns’ season opener against Louisiana-Lafayette. When he turned upfield, Hudson Clark and Grant Morgan, as well as Brooks, ganged up to bring him down well short of the line to gain.

Speaking to ESPN sideline reporter Katie George coming off the field after the first half, Pittman said of his defense, “They got after it pretty good.”

Arkansas’ defense brought more of the same intensity after halftime. Early in the third quarter, Morgan blew up a middle screen to Whittington and brought him down for a 2-yard loss.

ESPN analyst Greg McElroy raved about the sequence from Morgan. It was the Razorbacks’ sixth tackle for loss of the game.

“That was a beautiful play by Morgan,” said McElroy, a former Alabama quarterback. “One of the most productive tacklers in the SEC. He felt out the tunnel screen to the left then rallied quickly and beat the (offensive) lineman to the spot.”

John Ridgeway, lined up over the ball when it was snapped, also made a key stop on third down, rushing over near the white yard-line numbers to bring Card down short of the sticks. Texas elected for a fourth-down try on the next snap and was stuffed.

And finally, from his defensive end position, Zach Williams strained and knocked the football free from Card’s hand for a turnover. It was recovered by Brooks.

Running back Raheim "Rocket" Sanders scored from 26 yards on Arkansas’ next play.

“You have to give credit to the coaches over there,” Pittman said when asked about his team’s hustle to the ball. “But the players have to do it, too, you know? They have to be motivated to do it and have the belief to do it.

“It’s something we can build on. Joe’s been playing well, along with most everybody on the defense. The linebacker play has been really good as well.”