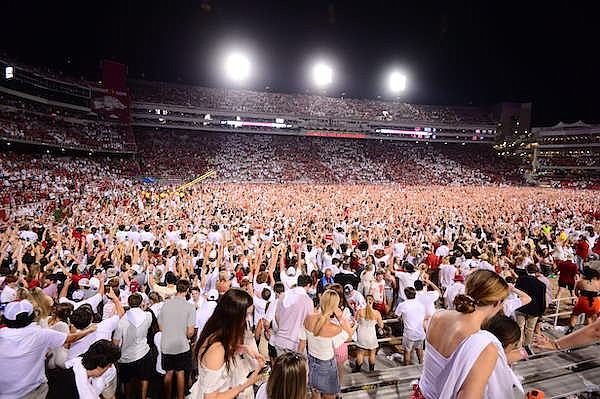 Arkansas fans cover the field following a 40-21 victory over Texas on Saturday, Sept. 11, 2021, in Fayetteville.

FAYETTEVILLE — Arkansas will have to pay for its post-game celebration following a 40-21 win over Texas.

The SEC fined the Razorbacks $100,000 on Monday for violating the league's policy that prohibits spectators on the playing field. Several-thousand fans among the announced attendance of 74,531 poured out of the stands following the game, while Texas players were still on the field.

The SEC policy aims to protect the safety of game participants and officials.

In a video posted to the Razorbacks' Twitter account on Sunday, Arkansas athletics director Hunter Yurachek can be heard speaking about the impending field rush with an Arkansas State Police officer.

It was Arkansas' second time to break the SEC's policy. The Razorbacks were fined $25,000 in 2014 when fans stormed the field following a 17-0 win over LSU that snapped a 17-game SEC losing streak.

The fine for a first offense was increased to $50,000 the following year.

The SEC policy was established in 2004. The league can levy a fine of up to $250,000 for the third offense and any subsequent offenses.

Arkansas' win was its first over its former Southwest Conference rival in Fayetteville since 1981. The Razorbacks went from unranked to No. 20 in The Associated Press Top 25 poll with the performance.