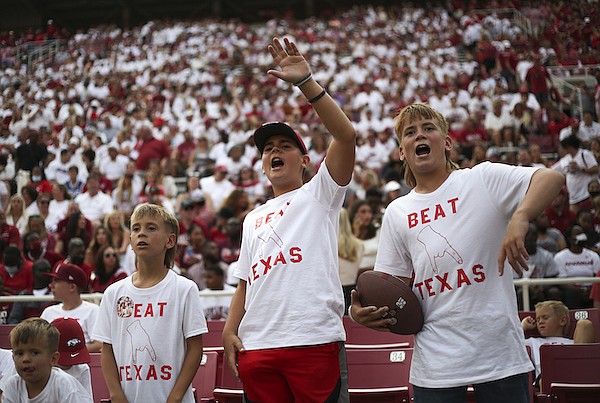 From left, Paton, Silas, Joshua and Caleb Everett of Greenbrier cheer during a game between Arkansas and Texas on Saturday, Sept. 11, 2021, in Fayetteville.

It was nearly midnight as I left the press box after completing my column on the Arkansas victory over Texas.

The thought as I emerged from the elevator and hit the sidewalk for the walk to my truck: there will be no traffic and it will be a quiet walk to the parking lot.

Nope. The stadium might have been empty, but the streets of Fayetteville were still abuzz.

A car passed with the sunroof open with two co-eds — and let’s hope they were at least college age — with at least half their bodies above roof level.

I’m pretty sure both were intoxicated as they screamed at me with double downward Horn hand gestures.

I did nothing to encourage them as they continued to scream and holler going north on Razorback Road, but I did smile.

It was just more proof that someone under 30 can hate Texas as much as those of my generation. Anyone who said the under-30 crowd doesn’t get it, doesn't get it.

Hatred of Texas has not gone away. It's alive and well.

There may be some young people who don’t get it, but don’t worry about the thousands of students who packed The Trough on Saturday night at Reynolds Razorback Stadium.

Those in the student section screamed as they sprinted into the stadium when the gates opened 90 minutes before the kickoff. And they screamed and chanted to the top of their lungs while the Razorbacks hammered Texas 41-20.

They were as awesome as Arkansas linebacker Hayden Henry, honored this week as the Walter Camp Foundation defensive player of the week.

Those students did their job as well as nose tackle John Ridgeway or those amazing running backs who danced through the Longhorn defense for four quarters.

They roared as Zach Williams stripped Texas quarterback Hudson Card from behind. That play was right in front of them and they didn’t need to see a replay to know that the ball belonged to the Razorbacks.

They celebrated goal-line stops with unbridled screams. They celebrated every play, every move by their Razorbacks that further tormented the Longhorns.

They wanted Texas blood all the way to the finish; some upset that coach Sam Pittman elected to take a knee for the final two plays. They knew Texas was incapable of stopping any running play at that point. A simple off-tackle call would have delivered another touchdown in a rout for the ages.

These UA students get what beating Texas means, and why wouldn’t they? So many are Texans by birth, now Razorbacks for life.

I’m guessing that more than half of the students in the stands were from Texas high schools where football is a religion.

They come to Arkansas because they can’t go to UT, a school with entrance requirements that can block a straight-A student who is not one of their high school’s top graduates.

It was an incredible show by the students. I do not believe they ever sat down during the game. They called the Hogs with unbelievable vigor. They displayed their downward Horn signals as they left the building, but not before they danced and celebrated with the football team on the field.

I’ve been told by some of my colleagues in the media that the young people don’t know the meaning of the Texas series. I never bought into it. The hatred had been unneeded for the last 30 years while the Hogs toiled in the SEC, but it was always there.

It’s never going away, either. It just needs games between the two schools to boil forth.

It helps when the Razorbacks have some fire to get a good boil going. The Hogs have that under Pittman, the second-year coach who has lifted them back to national relevance.

The Hogs are now No. 20 in the AP poll and their game with Texas A&M in two weeks has been picked as the CBS game. It’s set for national TV at 2:30 p.m.

It’s the kind of stuff that makes Jerry Jones happy that he fought to keep the Arkansas-Texas A&M game in AT&T Stadium.

I’m guessing the atmosphere will be terrific as the Hogs and Aggies make a statement that might be important when bowl bids are handed out in December.

It’s a good time to be a Razorback fan. So much is rolling right in the athletic department.

But it’s going right at the university, too. Enrollment has finally topped 30,000 for the first time. The steady number of Texans headed north has been a big part of that.

I recall the first time I heard that the school president was in favor of the series with Texas A&M in AT&T Stadium. He wanted a UA presence in the Dallas Metroplex for student recruitment as much as any football coach wanted blue-chip players.

All of that was in evidence on Saturday night. By the way, the license plates on the car with the happy co-eds? You guessed it: Texas.

Arkansas football players once sang a brief song after every SWC victory. The key line, “We don’t give a damn about the whole state of Texas, because we're from Arkansas.”

Texans sang it with delight. I know they did care about loved ones in Texas, but they loved beating Longhorns, Aggies, Cougars, Bears, Mustangs, Owls, Frogs and Red Raiders.

Loyd Phillips, from Longview, was proud of his Texas roots, but delighted in beating the SWC teams that did not recruit him.

It’s hard to imagine the Longhorns didn’t want Phillips. He turned out to be the best lineman in the nation, the Razorbacks' first two-time All-America selection and the Outland Trophy winner.

I got to know Phillips as the vice principal at Rogers High School. We had talks about his games against Texas. His teams went 3-0 against the Longhorns. He played in a rage in those games.

My daughter Sarah, a star soccer player at Rogers, had an interesting discussion with Phillips. He called her to his office about a form for a college visit.

She was going to attend a recruiting showcase event that was co-hosted by two Austin soccer clubs with games played on both the fields at St. Edwards University and the UT, although neither school was officially involved.

The way the form was filled out was vague. My daughter just wrote that she was going to play in front of college coaches (true) on the UT campus. The idea was to get an excused absence.

Phillips didn’t understand. He knew Sarah’s grandfather had a dislike for UT, just as he did. He couldn’t fathom Orville Henry’s granddaughter playing soccer for the Longhorns.

“Does Mr. Henry know about this?” Phillips quizzed Sarah. “I don’t like this one bit.”

Quickly, Sarah came clean. UT had no interest in her, nor did she in becoming a Longhorn. Phillips smiled, signed the form and slid it back to her.

This was almost a decade after the Hogs had exited for the SEC, but Sarah knew not to wear anything close to burnt orange. She knew how to make a downward Horn sign and when to use it.

Now, do they know what playing Arkansas means in Austin? Do they understand what the SEC is all about?

Probably not, but they may have a better idea after the way the students represented Saturday night.

Joe Kines, as Arkansas' defensive coordinator in 1990, told a Saline County Razorback Club what going to the SEC means.

“Wear a raincoat if you sit in one of the first few rows at an SEC game,” Kines said. “They slit your throat and drink your blood.”

Yes, they do. Those students in the first few rows skipped the raincoats Saturday night. But they did celebratory dances in Texas blood.