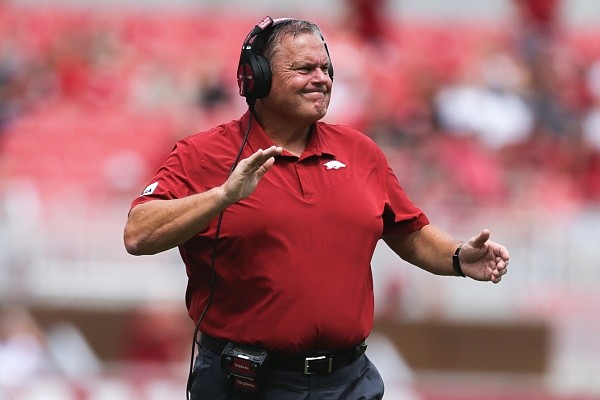 FAYETTEVILLE — The issues for the University of Arkansas football program this week have to do with hype, expectations and staying on task.

After snaring a signature victory in their 12th game under Coach Sam Pittman with Saturday’s 40-21 rout of No. 15 Texas, the Razorbacks are 2-0 and dealing with adulation from all quarters heading into this week’s game against unheralded Georgia Southern (1-1).

Arkansas earned a spot in both national polls, was named the Cheez-It Bowl national team of the week and had players like Hayden Henry and Cam Little claim national and SEC player of the week awards after throttling the Longhorns.

The Razorbacks are No. 20 in the Associated Press poll and No. 24 in the coaches poll for the program’s first rankings since late 2016.

Pittman said he expects the coaching staff and players to do a good job focusing on Georgia Southern, which has a triple-option component to its offense, putting a heavy emphasis on execution of defensive assignments.

Pittman also said he wasn’t concerned with being ranked or talking about the rankings.

The Razorbacks will have the opportunity to start 3-0 for the first time since 2016 and set up a major showdown with Texas A&M next week in Arlington, Texas. CBS Sports announced Monday it has chosen the Arkansas-Texas A&M game, the Razorbacks’ third game against a former Southwest Conference rival in the first month of the season, for its 2:30 p.m. national telecast.

“I really haven’t had a whole lot of time to think about that,” Pittman said. “It’ll probably mean more if we beat Georgia Southern, you know.”

The Eagles, under fifth-year Coach Chad Lunsford, won a 30-25 shootout with Gardner-Webb of the FCS ranks in their opener before falling 38-6 at Florida Atlantic last week.

After a reporter pointed out the magnitude of the Texas victory, the rankings and the acclaim Arkansas has received, he asked Pittman how his team could avoid a letdown against Georgia Southern.

“Well, you try to have the media not say what you just did would be the first thing,” Pittman said, laughing with his eyes. “Nah, you know I’m teasing.

“To be honest with you, I’m not one bit concerned about it, and I’m not going to talk about it a lot.”

Pittman gave an example from last season in how the Razorbacks played winning football at No. 13 Auburn in Week 3 immediately after upsetting No. 16 Mississippi State on the road.

“We went to Auburn and had that [game-deciding] call at the end of the game,” Pittman said. “Our kids could have gotten the big head after Mississippi State, but they didn’t. They played a good game against Auburn. That happened.

“They came back and beat Ole Miss. Went and played A&M pretty good last year. … So we have proven in the past we can just flush whatever success, or however bad it may be, we can flush it and go to the next week. I believe that is what we’ll do.”

Pittman’s Saturday night activity after whipping the Longhorns might have been similar to those of fellow coaches, players and fans.

Pittman said he went to bed about 4:30 a.m. on Sunday after celebrating with family and friends at his house.

“A lot of people came over and we had a good time,” Pittman said. “I laid down before then, I just couldn’t go to sleep. I was like a bunch of people, probably, thinking about the game and all that.”

Pittman had to be up and ready to host recruits for a 9 a.m. breakfast on Sunday.

Pittman said coaches have to get used to coming up short on sleep during the season.

“It’s really how it is, to be honest with you,” Pittman said. “Because let’s say you have a night game on the road and you get home at 2:30, 3 in the morning, which happens when you go on the road.

“Business as usual on Sunday because at 1 o’clock I’m going to be in with the defensive staff, 2:00 offense and 3:00 special teams. Then as a staff we’re going on to the next game. It’s kind of how we’re built from August 1 to hopefully January 1.”

Speaking on the “Jim Rome Show” on Monday, Pittman reiterated a point he made during his postgame remarks at Reynolds Razorback Stadium.

“We wanted our fans to wake up on a Sunday morning and have something to talk about besides, ‘Oh, man, the Hogs didn’t play well’ and this, that and the other,’ ” Pittman said. “Our kids gave that to them. We gave back to them for helping us win because I really believed they helped us get the win with 76,000 people there.”