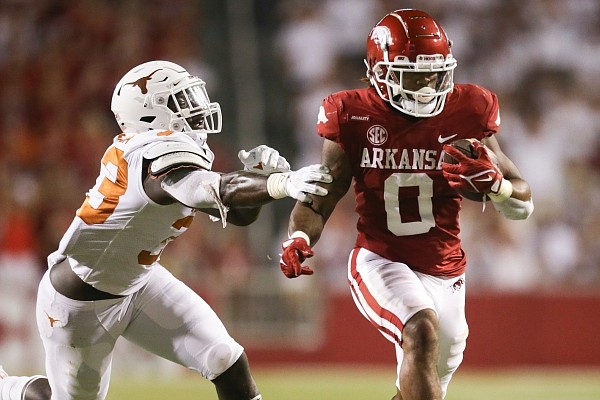 Arkansas running back AJ Green (0) carries the ball, Saturday, September 11, 2021 during the fourth quarter of a football game at Reynolds Razorback Stadium in Fayetteville.

FAYETTEVILLE — Three days before his team's game against Texas, Arkansas coach Sam Pittman was asked which players could get more playing time than in Week 1.

Pittman singled out one freshman, running back AJ Green, who was one of the highest-rated prospects in the Razorbacks’ most recent recruiting class. With him in the fold, Arkansas carried into the game at least four more-than-capable tailbacks.

Green, according to Pro Football Focus, played just 10 offensive snaps in the Razorbacks’ 40-21 rout of Texas, but his debut was memorable. He had seven carries for 67 yards.

The game for the former Tulsa Union standout was highlighted by a 30-yard touchdown in the fourth quarter to give the Razorbacks their final touchdown. The sequence was a showcase of his elite speed.

And it spoke to the depth of talent in the Arkansas backfield.

“He offers something, a little bit of a combination of all the guys,” Pittman said last week. “He has good speed. He’s a 200-pound guy.”

Five of Green’s carries resulted in gains of more than five yards. Five touches came during the same drive in the fourth quarter.

In addition to the first touchdown of his career, he reeled off a tough 19-yard run.

“You can take a 10.3 (100-meter) guy and he runs 11.5 because he’s just thinking all the time,” Pittman said. “He understands the plays, what his reads are now. He’s playing a lot faster. I look for us to use him more and more each week.

Green was thought to be among the candidates to be the Razorbacks’ No. 2 running back when training camp began, but fell behind others at his position in the preseason due to a concussion. After the team’s 13th practice on Aug. 20, offensive coordinator Kendal Briles said Green had just completed his fourth workout.

Pittman was especially hopeful Green would be healthy enough to participate in the second preseason scrimmage, but he was held out. Since that point, coaches have seen encouraging progress.

“With that concussion that he had earlier in the fall, he missed a lot of valuable time,” Pittman said. “We certainly wanted to see him get tackled in scrimmages — or not get tackled, however you want to look at it. He started really having good practices, playing faster.

“Again, those freshmen, they don’t know what the read is, what the play is, any of those things early.”

Arkansas freshman Raheim "Rocket" Sanders is excited by what Green brings to the tailbacks group after watching his debut. Green had a grade of 71.9 against the Longhorns, according to Pro Football Focus.

“He’s pretty fast. I like that,” Sanders said. “He makes me get better in that room. He makes me get better because every time he goes fast, I want to go fast. It’s no hate or nothing between any of us, but at the end of the day, it feels like when somebody else is going fast and they turn it up a little notch, I feel like I should turn it up a little notch.

“In that room, he’s making me better, and not just me, but other cats as well.”