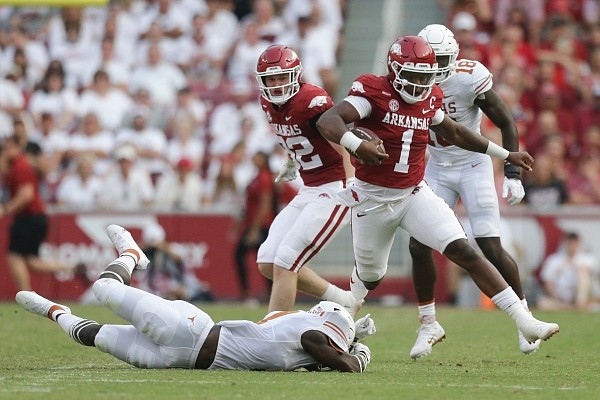 Arkansas quarterback KJ Jefferson (1) carries the ball, Saturday, September 11, 2021 during the first quarter of a football game at Reynolds Razorback Stadium in Fayetteville.

An analysis of Arkansas quarterback KJ Jefferson's fourth career start after a re-watch of the Texas game:

Best throw: While the 45-yard completion to Tyson Morris was the biggest passing play of the game, Jefferson’s throw to Treylon Burks for a 20-yard gain in the second quarter was his best sequence. Jefferson rolled right and zipped a pass 16 yards downfield, and Burks picked up 4 extra yards after the catch. To me, that was an, “OK, he’s settled in” type of dart.

Worst throw: The interceptable pass targeting Burks in the south end zone. The throw was broken up by Anthony Cook at the goal line and, on replay, it appears Cook tipped the pass with both hands. If Jefferson had given Burks another split second on his route, perhaps Arkansas would have had a touchdown there.

• Jefferson’s second interception of the year was a terrific play by Texas’ B.J. Foster, who tipped the pass with his right hand to himself. Had he not gotten a hand on the pass, Ketron Jackson would have likely scored the first touchdown of his Arkansas career.

• Incomplete pass intended for Burks in the end zone that was tipped at the goal line.

• Incomplete pass intended for Burks in the end zone

Analysis: Jefferson had an up-and-down Week 1 against Rice. Understandably, there were a few questions about the passing game after a few throws sailed and he was intercepted once. The saying is that teams can see a good deal of improvement between their first and second games, and I think the same applies to Jefferson. His numbers through the air against Texas — 14 of 19 for 138 yards and an interception — didn’t pop, but he met the moment head-on in the biggest start of his career and managed the Razorbacks’ offense well.

Outside of one interceptable throw in the red zone and the tough-luck interception early in the second half, Jefferson was clean. I did not chart him with a wholly inaccurate pass, which I think speaks to his composure, keeping things simple and taking what the defense gave him. Nearly half of his passing yards came on two throws — the 45-yard deep ball to Morris just minutes after Texas scored to pull within 16-7 in the third quarter, and a 20-yard strike to Burks.

The response from Jefferson on the series following his interception was critical, and his over-the-top connection with Morris pushed him to 4 of 4 for 112 yards on throws of 16-plus yards downfield this season.

Ten of his 14 completions came on throws that did not travel more than 5 yards downfield. He was solid on intermediate throws, picking up first downs on both completions in that range. They might not look like much in real time, but those are the kinds of drive-sustaining passes that loom large in hindsight. Overall, I thought Jefferson was methodical as a passer. The success of Arkansas’ running game probably alleviated some pressure as well.

On the ground, Jefferson was terrific again, rushing for an average of 7.3 yards per carry. After two games, he has a run grade, according to Pro Football Focus, of 85.6, which ranks second nationally among FBS quarterbacks. Virginia’s Keytaon Thompson is No. 1 at 86.8, so Jefferson in nipping at his heels.

Jefferson had a handful of nice runs against the Longhorns, including a 15-yard pickup on third-and-6 and a 12-yard gain on fourth-and-2 that eventually led to a Cam Little field goal to give the Razorbacks a 3-0 lead. His 34-yard run, which against showcased his vision and patience in the open field, set up another field goal by Little prior to halftime.

I think Arkansas’ passing game numbers will increase soon. We know Jefferson can have a big day throwing the ball. We’ve seen it before. The Georgia Southern game on Saturday may be when it happens again.