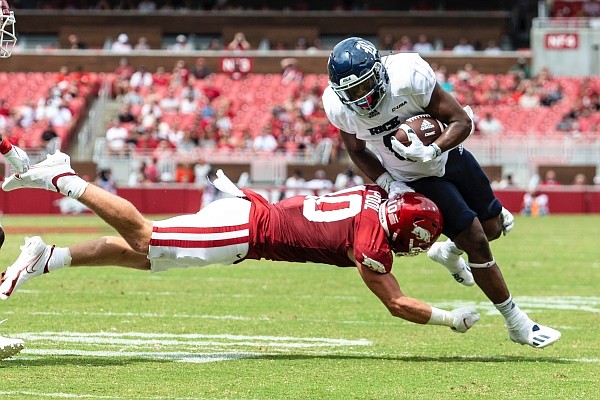 Arkansas’ three most experienced linebackers have all spent one half on the bench this season due to targeting penalties, which seemingly made them hungrier once on the field.

The senior trio of Hayden Henry, Grant Morgan and Bumper Pool combined for 38 tackles Saturday as the Razorbacks humbled visiting Texas 40-21. They have totaled 58 tackles through two games.

“I knew I had one half to go, so I wanted to just go out and give it everything I had,” Pool said. “I was excited to get in there and contribute after being out the first half.”

Pool leads the team with 24 tackles after two games while Henry has totaled 20, safety Jalen Catalon 19 and Morgan 14.

Henry sat out the first half of the opener for his targeting penalty against Alabama in 2020, while Morgan was tossed in the first quarter against Rice and Pool ejected in the second half against the Owls.

“(Henry) played unbelievable, but he had been doing that for all fall camp,” Pool said. “He is such a ferocious player that runs to the ball and hits you as hard as he can. It has been great to watch – fun to watch. He is a good friend of mine and it has been fun playing with him and Grant.”

While Arkansas is a heavy favorite against Georgia Southern, Pool knows that the Eagles' (1-1) triple option offense will be a challenge.

“I think that and their speed is going to cause us some stress, and I think that is something that we have to focus on this week in practice and we have to do our jobs and handle our responsibilities,” Pool said. “We saw it in camp and it is a different style of offense, but was excited about it.”

Arkansas coach Sam Pittman noted earlier this week that the Razorbacks had prepped in preseason camp for just this week.

“I think that was one of the most important things that we did was see them and preview them,” Pool said. “At the time, it seemed so far away, but now it is here so quickly and now we have seen it, it is familiar and that’s huge to know what they are doing and have a step up on this week.”

Starting quarterback Justin Tomlin is back after being out his team’s first two games for academic issues.

“They have their quarterback coming back and I think he is a guy that makes their offense go,” Pool said. “He runs well and they have good backs. They have one back that is pretty big, he is probably 230 and I think the more we run to to the ball and gets shots on him early the better it will be.”

Pool is proud of the win over Texas, but knows his team has to turn the page quickly.

“I think the biggest thing is that was a big win for us, but we have to move on,” Pool said. “I think that was just one step toward reaching our goals, so we have to put last week away and lock into this next game because it is the most important one. I think this team is excited about the challenge.”

Pool is not too impressed with being ranked 20th in the Associated Press Top 25 poll and 24th in USA Today.

“I’ll be honest with you, it doesn’t feel any different,” Pool said. “That win was still big, but the way we come into practice, it is almost like a restart. We have a new game this week.

"That was great, but we will look back on it when the season is over.”