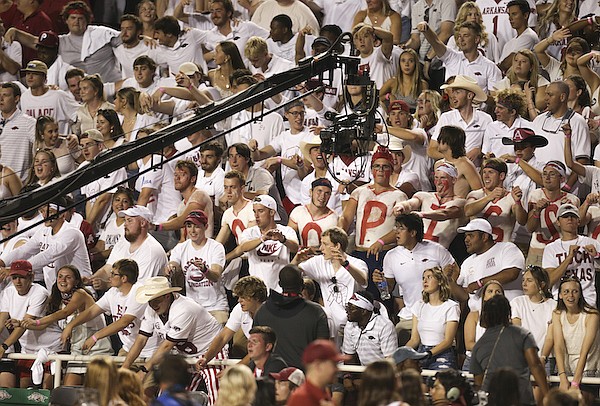 An ESPN camera is shown in front of Arkansas' student section during a game against Texas on Saturday, Sept. 11, 2021, in Fayetteville.

According to figures posted at ShowBuzzDaily.com, the game between the Razorbacks and Longhorns drew an average of nearly 3.4 million viewers on ESPN. That figure is a 110% increase over ESPN's same window for the second week of the 2019 season for a game between BYU and Tennessee. Most teams had not began playing this time last year.

A big night in sports, coupled with Arkansas’ runaway victory, likely drew some eyeballs away from the ESPN broadcast. The Michigan-Washington game on ABC averaged 4.7 million viewers, and the 20th anniversary Sept. 11 baseball game between the New York Yankees and New York Mets averaged 2.4 million viewers on Fox.

Oregon-Ohio State on Fox (7.7 million); Michigan-Washington on ABC; Texas A&M-Colorado on Fox (4.5 million); and Iowa-Iowa State on ABC (3.9 million) averaged more viewers than the game between the Razorbacks and Longhorns.

Arkansas-Texas is the 10th-most viewed college game this season, based on ShowBuzzDaily numbers for the past two weekends.

According to archived TV figures at SportsMediaWatch.com, last week’s game was the Razorbacks’ most viewed since 2017, when an ESPN primetime game at top-ranked Alabama drew an average audience of 3.9 million.