Home crowd a reminder of another orange victory 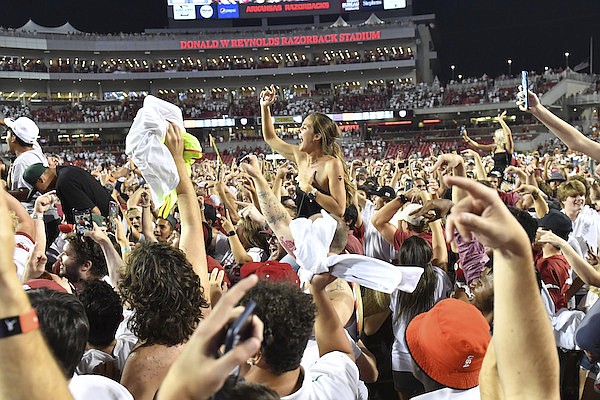 Maybe it is the color orange.

On the elevator after Arkansas’ 40-21 victory over Texas on Saturday night, a young man remarked the only time he remembered a crowd as loud and involved was when he was a student in 1999 and the Razorbacks beat Tennessee 28-24.

The season before Tennessee, thanks to a fumble by Arkansas that let the Vols come from behind for the win, won the national championship.

In 1999 against Tennessee, Arkansas trailed 24-14 midway through the third quarter, but Clint Stoerner found Boo Williams for a 53-yard touchdown

With 3:44 to play, Stoerner saw Anthony Lucas streaking across the back of the end zone and fired a bullet that Lucas, leaping as high as he could, pulled in for the winning touchdown.

In those days, the media was allowed on the field prior to the end of the game and as yours truly headed out, a Tennessee writer said: “They left Tee Martin too much time.”

Martin drove the Vols to the Arkansas 17, but back-to-back incomplete passes gave the Hogs the possession and the game.

Last Saturday, the crowd that stormed the field probably would have taken down the goal posts except they are now on a mechanical device that allows them to be lowered to the ground. About 16 grounds keepers made sure they were down before the crowd arrived.

The celebration was a spectacle to behold and an announcement had to made that all Razorback players were to report to the locker room immediately.

For the first time in five years, the fans can believe again.

This team is not going to let a lead slip away.

When it was 16-0 Arkansas at the half it may not have felt like it was enough, but it didn’t feel like that was all the Razorbacks were going to score either.

As far back as the spring, there had been indications this team was going to pound the ground on offense.

They were going to line up with bigger, stronger offensive lines, hold their blocks and move the chains.

Against Texas, Arkansas dominated the line of scrimmage on both sides of the ball.

They manhandled the Longhorns.

The Razorbacks rushed for 333 yards, four running backs scored touchdowns and none of them had 100 yards rushing.

Kendall Briles kept fresh legs in the game until Texas just wore out.

The Razorbacks have their own version of The Four Horsemen.

Plus quarterback KJ Jefferson ran for 73 yards on 10 carries and quarterback Malik Hornsby had a carry for 29 yards.

Add Jefferson’s 138 yards passing and Arkansas had 471 yards of offense.

And when the Longhorns had the ball, they had very little success as the defense swarmed the ball on every down.

No Arkansas defender took a single play off.

It was more lopsided than the score indicated.

The Razorbacks had only four penalties — nine less than a week earlier — for 40 yards, and the special teams play was vastly improved overall.

The results were so positive, the Razorbacks went from receiving no votes in the Associated Press poll to being ranked No. 20. The Longhorns fell from No. 15 with 683 points to just 23 point and out of the poll.

The offense and defense were vastly improved from a year ago, even a week earlier and the crowd definitely did its part.