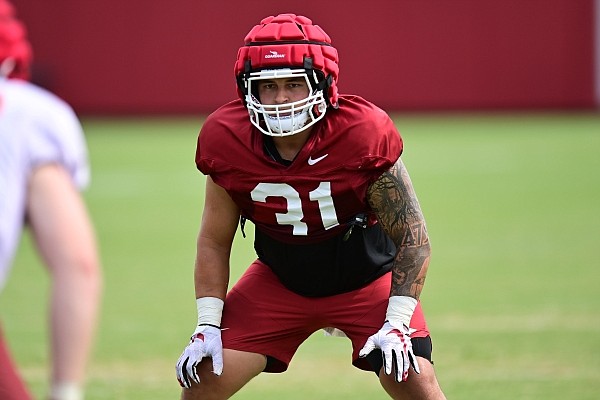 Arkansas linebacker Grant Morgan prepares for a play to begin during a preseason practice on Aug. 9, 2021, in Fayetteville.

FAYETTEVILLE — University of Arkansas linebacker Grant Morgan was going through drills in Monday’s practice inside Walker Pavilion and wearing braces on both knees two days after suffering an apparent injury and leaving on the first play of the fourth quarter in the Razorbacks’ 40-21 win over No. 15 Texas on Saturday.

Morgan got rolled over in the pile after a 1-yard gain by Texas tailback Bijan Robinson, stayed on the field for a short while and had assistance heading to the sideline. However, the two-time defensive captain and super senior from Greenwood had his knee wrapped in ice and stayed on the sideline for the remainder of the big win in the rivalry game.

“Grant, I don’t know how he’s going to be, to be honest with you,” Pittman said at his weekly news conference early Monday afternoon. “You know he’s tough. I expect him to go out to practice today and do what he can do. I think he’s still a little bit day by day.”

Morgan played seven games last season with a significant brace on his left elbow after he “tore some stuff up” on both sides of the elbow in Week 2.

“I’ve said it before, you’d have to cut my arm off to get me off the field,” Morgan said during training camp.

Morgan suffered a knee injury in last year’s penultimate game at Missouri and missed the finale against Alabama, but he was practicing and preparing to return in the Texas Bowl before it was cancelled due to covid-19 issues at TCU.

The UA athletic department was assessed a fine of $100,000 by the SEC office on Monday after thousands of fans stormed the field at the end of Saturday’s 40-21 rout of No. 15 Texas.

The student section led the way in rushing onto the field with around 30 seconds left in the game after Malik Hornsby took the final two snaps in the “Victory” formation with Arkansas inside the Texas 10-yard line. Fans stretched from end zone to end zone soon after the game’s end.

The Razorbacks drew a second-offense fine for the league’s “access to competition area” policy, having also being fined for a field-storming incident following a 17-0 win over No. 17 LSU in 2014 after snapping a 17-game SEC losing streak.

Arkansas Athletic Director Hunter Yurachek, speaking during the aftermath of Saturday’s game, said, “We’ll be fine,” when asked about having to shell out the hefty fine.

Security officials surrounded both goal posts, which were lowered on their collapsible hinges, to keep them from being torn down and carted off the field.

Fines levied against schools for violation of the access to competition area policy are deposited into the SEC Post-Graduate Scholarship Fund, the SEC announced.

Financial penalties, which were increased by action taken during the 2015 SEC spring meetings, are imposed for violations in all SEC sports. Third and subsequent offenses of the policy are subject to a $250,000 fine and a school’s violation clock does not reset.

Arkansas was named the Cheez-It Bowl national team of the week after pounding the No. 15 Longhorns 40-21 at Reynolds Razorback Stadium.

The win drew widespread national acclaim and vaulted the Razorbacks to No. 20 in the Associated Press poll and No. 24 in the coaches poll.

Arkansas linebacker Hayden Henry and kicker Cam Little earned player of the week honors from the SEC office on Monday.

The Razorbacks’ home away from home game against No. 7 Texas A&M in two weeks has been picked up by CBS for its national broadcast.

Texas Coach Steve Sarkisian announced during his opening remarks on Monday that Casey Thompson will start Saturday’s game against Rice at quarterback and Hudson Card will also play.

Card, redshirt freshman, struggled in the Longhorns’ loss at Arkansas, completing 8 of 15 passes for 61 yards and taking 3 sacks. Thompson, a junior, entered late in the third quarter and completed 5 of 8 passes for 57 yards and rushed for 44 yards and 2 touchdowns.

Arkansas has sent just one of its five team captains to midfield for the coin toss in each of the first two games, and that will continue.

The other four Arkansas captains have been on the field, but they have lined up side by side several yards back.

“The rule is you can take four out to the coin toss, but the fifth guy has to stay back,” Arkansas Coach Sam Pittman said. “I said, ‘Hey, all you guys go out there and one [stay] back.’ ”

Linebacker Grant Morgan, in his second year as a captain, wasn’t having that.

“Grant said, ‘We’re not leaving one of our guys behind, so we’re going to have one go out and the four are going to stay together,’ ” Pittman said. “Thought it was pretty cool.”

Morgan was at midfield for the coin toss against Rice, while safety Jalen Catalon, a Texas native, was out there against Texas.

Fellow captains Myron Cunningham, KJ Jefferson and Joe Foucha will rotate in for the toss as the season goes on.

Freshman Cam Little was named one of three “stars of the week” by the Lou Groza Award, sponsored by the Palm Beach County Sports Commission, which recognizes the nation’s top kickers.

The Groza Award, named for the Pro Football Hall of Famer, also named Miami freshman Andy Boregales and Boise State sophomore Jonah Dalmas as its stars of the week.

Little has 24 points to rank fourth in SEC scoring and second in kick scoring behind Alabama’s Will Reichard.

Little was confident in the Razorbacks’ plan against Texas.

After Arkansas downed No. 6 Texas 38-28 in Austin, Texas, on Sept. 13, 2003, Loggains, a UA quarterback and holder at the time, and Beth, a UA cheerleader, posed together making “Horns Down” signs on the field at Memorial Stadium. The pair did the same thing after Saturday’s win, with Loggains posting both pictures on social media and writing, “Some things never change. 18 years later and it still feels right!! Go Hogs!!”

Many Arkansas players and fans and other assistant coaches also flashed the “Horns Down” symbol as well, but Coach Sam Pittman said he doesn’t do it.

A large group of recruits attended the Texas game and were waiting for the Razorbacks outside the locker room.

“I think they were giddy, excited about the Razorbacks,” Coach Sam Pittman said. “I know the ones that were here, it was really cool to see their faces.

“Some that had committed to us, [and] you could see their faces like, ‘Thank you. I know I wanted to be a Razorback, but I do a little bit more now.’ So it was a good weekend.”