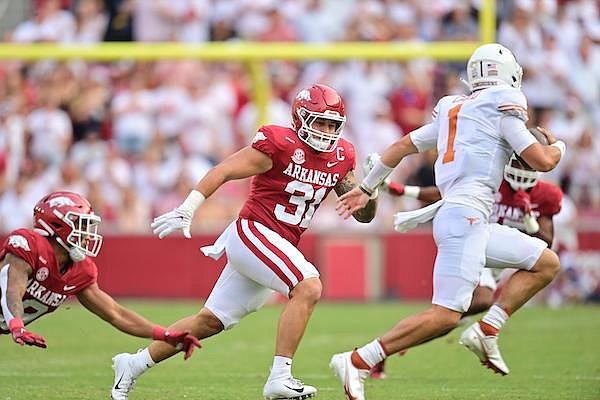 FAYETTEVILLE — Grant Morgan earned a national player of the week award Tuesday — the second Arkansas linebacker to do so following the Razorbacks' 40-21 victory over Texas.

Morgan's recognition by the Chuck Bednarik Award followed his 13-tackle performance in 44 snaps against the Longhorns. Morgan, who left the game with an injured knee in the fourth quarter, also had 2.5 tackles for loss, including a half-sack.

Pro Football Focus has given Morgan an overall grade of 83.1 through two games. He played only six snaps in the season opener against Rice before he was ejected for a targeting penalty.

Morgan told KABZ-FM on Tuesday that he expects to be OK from the knee injury. Arkansas coach Sam Pittman said Monday that Morgan's availability to play in this week's game against Georgia Southern is day-to-day.

It is the second time Morgan has earned the Bednarik Award's player of the week honor, which is reserved for defensive players. Morgan's first recognition came last October when he recorded 19 tackles and returned an interception for a touchdown against Ole Miss.

Arkansas linebacker Hayden Henry was named the Walter Camp Football Foundation's national defensive player of the week Sunday. Henry recorded a career-high 15 tackles, including 2.5 tackles for loss against the Longhorns.

Henry was also named SEC defensive player of the week Monday by the league office.