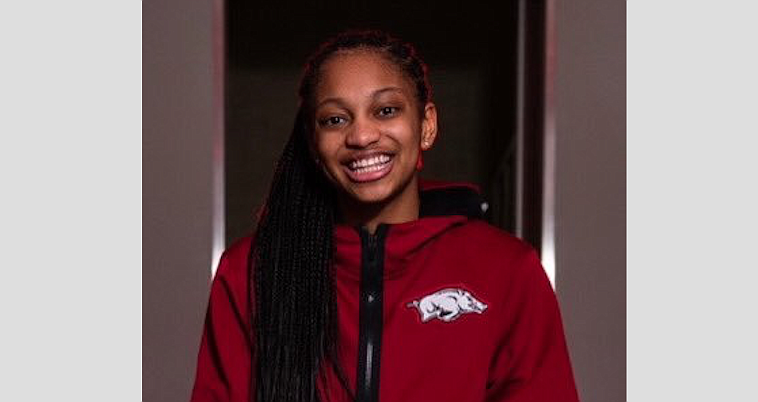 Scott, 5-9, of Orange Park (Fla.) Oakleaf, made an unofficial visit to Fayetteville last weekend and attended the Razorbacks' football game against Texas.

"The atmosphere was amazing," Scott said. "Seeing all those fans and how hype they are and how much they support their team, it gave me a really good feeling about playing in front of this fan base. That I would have people supporting me, I just know I will have fun in those student sections, too, when I get there."

She said she fell in love with the campus and the wide-open style of play used by Neighbors' teams.

"They were talking to me and telling they wanted to play me being able to create, do what I do and they really believed in me in being able to do that," Scott said.

It was after attending an Arkansas practice and sitting through a film session is when she starting thinking about committing.

"I really liked how they practiced, everything they've been telling me it's really true," she said. "It's not like some other schools say it but it's not what they really do. ... When [Arkansas] started showing me film, I was like, 'Yeah, this is where I want to go.' "

She averaged 23.4 points, 5 rebounds, 4.2 assists and 2.6 steals per game as a sophomore and led her team to Florida's Class 7A state semifinals. She scored 20-plus points 15 times during the season and recorded her 1,000th career point on Jan 29.

She said she had a good vibe with Neighbors, associate head coach Todd Schaefer, and assistants Pauline Love and Lacey Goldwire.

She chose the Razorbacks over scholarship offers from more than 30 other schools, including Florida, Florida State, Texas, Louisville, Michigan, Ohio State, Tennessee, Alabama, SMU, Rutgers, Notre Dame, Virginia and other programs. Scott was among 34 players invited to the USA Basketball U16 women's team trial held in June.