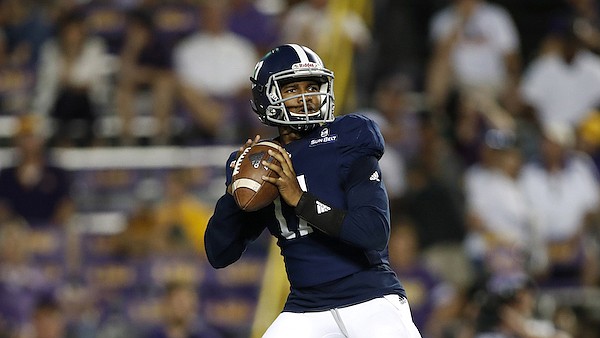 FAYETTEVILLE — Georgia Southern is getting starting quarterback Justin Tomlin back from academic suspension, and the Eagles might have injured tailback J.D. King in the mix against Arkansas on Saturday.

A fifth-year senior, King is recovering from a torn anterior cruciate knee ligament suffered in Week 7 last season, when he was one of the Sun Belt Conference’s top rushers.

“We’ve been a little bit more careful with him, did not want to put him in a situation where we mess it up and he doesn’t have an opportunity to play this year,” Lunsford said. “I think we need to see how he looks the rest of the week. If I was a betting man, right now I’d say he’s probably not going to play against Arkansas. However, that may change over the course of the week.”

The Eagles lost sophomore inside linebacker Marques Watson-Trent with a torn knee ligament suffered in the season opener. Watson-Trent was replacing sixth-year senior Todd Bradley-Glenn, who tore a biceps muscle in camp and is out for the season.

One of the more enduring images from Arkansas’ 40-21 win over No. 15 Texas last Saturday, aside from the field at Reynolds Razorback Stadium being covered with fans after the game, was a play on which safety Joe Foucha flew through the air to get in on a tackle.

Foucha posted on social media a still shot of the play, on which he is almost horizontal, with his left hand touching Texas tailback Bijan Robinson’s right elbow with three other Razorback defenders bearing down on the runner. Foucha accompanied that with a photo of Arkansas defensive coordinator Barry Odom, during his playing days, flying through the air as a Missouri linebacker aiming toward a Kansas quarterback. Foucha wrote, “Not only do our DC talk it he LIVED IT! RUN & HIT”

Foucha was asked about the play Tuesday.

“It was big for our defense,” Foucha said. “We have a run-and-hit mentality, so just to have 10 guys around the ball when he was down, it was one of the best pictures you could ever frame.”

“Wasn’t that awesome?” Pittman asked, saying the coaches and players deserve credit for playing that style.

“But that was pretty cool. I watched it several different times when I was grading the tape and looking at it. He launched about 5 yards and ended around his ankles and got him on the ground with a host of other people. That was my favorite play of the game by the way, because I think there was 7 or 8 Razorbacks around the ball carrier.”

One half to play

Arkansas linebacker Bumper Pool had to sit the first half of the Texas game due to a targeting ejection in the second half of the 38-17 win over Rice in the season opener.

Pool tried to make up for lost time by racking up 10 tackles in the second half.

“I knew I had one half to play, and I was going to give it everything I had when I got in there,” Pool said. “Just tried to bring that energy. I was honestly just excited I was able to contribute to the game after being out the first half.”

Freshman tailback AJ Green made the most of his shared time in the backfield, scoring on a 30-yard breakaway over the left edge and contributing 67 yards and 9.6 yards per carry to the Razorbacks’ 333 rushing yards against Texas.

“I was very excited about AJ the other night,” senior tackle Myron Cunningham said. “I think he brings a lot of things to the table. He can come out of the backfield, catch, he’s obviously got explosive speed. I’m excited for what he can bring.”

A second Arkansas linebacker picked up a national award this week when Grant Morgan was named the Chuck Bednarik Award national player of the week Tuesday.

Morgan racked up 13 tackles, including 21/2 tackles for loss and a half sack while playing three quarters for the Razorbacks on Saturday.

Arkansas shut the Longhorns out in the first half and held them to 3.6 yards per carry and 256 total yards.

Earlier this week, linebacker Hayden Henry was named the Walter Camp Foundation national defensive player of the year for his 15 tackles and 21/2 tackles for loss in the game.

With rushing touchdowns by four Razorbacks against Texas last Saturday, Arkansas accomplished a feat that had not been done in nearly four years. In chronological order, tailbacks Dominique Johnson had a 5-yard touchdown run, Trelon Smith plunged in for a 1-yard score, Raheim Sanders broke free for a 26-yarder and AJ Green scored on a 30-yard romp against the Longhorns.

The last time Arkansas had four different players account for a rushing touchdown in a game came in a 39-38 win over Coastal Carolina on Nov. 4, 2017.

Tailback Devwah Whaley scored from the 5, tight end Austin Cantrell matched the 5-yarder, tailback T.J. Hammonds broke away for an 88-yard touchdown and quarterback Cole Kelley plowed in from the 1 with 1:55 remaining for the game-deciding score.

Georgia Southern has a 1-13 record vs. the current roster of SEC teams, but the lone win is a good one.

247Sports has already begun releasing bowl projections, and the Razorbacks’ win over Texas had the website high on the Hogs this week.

The Razorbacks were projected to face Michigan in the Citrus Bowl by the site Sunday.

Kicking for a cause

Arkansas kicker Cam Little, the SEC freshman of the week, is going to donate $10 to Downs Syndrome Connections of Northwest Arkansas for every field goal he hits this season, starting with his 4-for-4 effort against Texas.

It’s a cause that is personal for Little because his cousin, Ayden, has Downs Syndrome.

“I’ve grown up around him, hung out with him since I was five or six,” Little said. “He’s 17. We’ve kind of been the same age. To give back to an association like that, it’s so personal to me. It’s great and I hope I can make as many kicks to donate as much money to that association as I can.”

“Oh man, he’s a great coach, a great guy,” Jones said. “He’s going to bring a lot of energy to the table. He wants to play tough football.”