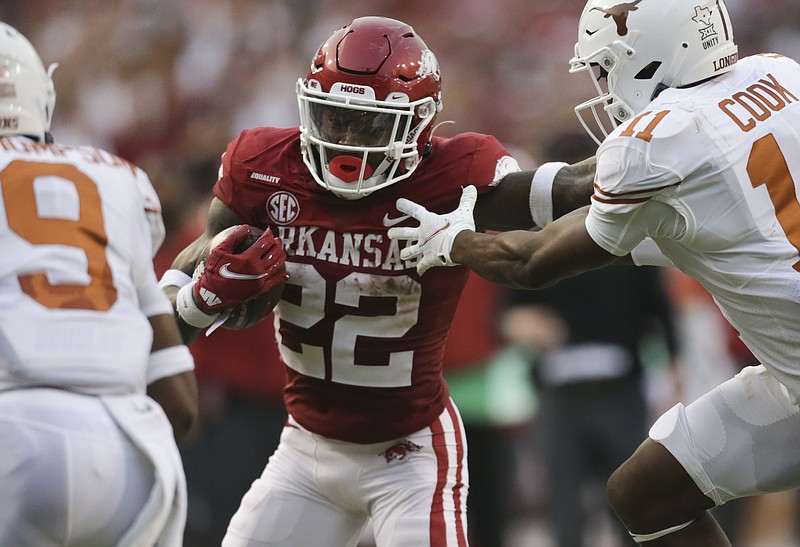 FAYETTEVILLE — Heading into Arkansas’ football preseason, Sam Pittman knew he could confidently count upon just one running back.

Off the Razorbacks running 333 yards to a 40-21 victory over the then-No. 15 Texas Longhorns last Saturday, it seems he has four.

Trusted Trelon Smith, the fourth-year junior and last year’s leading Razorbacks rusher netting 710 yards with 5 touchdowns on 134 carries, led against Texas with 12 carries for 75 yards and a touchdown.

On Smith, just 5-9, 190 pounds, the load was lightened by Pittman, offensive coordinator Kendal Briles and running backs coach Jimmy Smith. The previous week Smith toted 22 times for 103 yards and a touchdown in the 38-17 season opener over Rice.

True freshman Raheim “Rocket” Sanders had 8 carries for 50 yards, true freshman AJ Green had 7 for 67 yards, and redshirt freshman Dominique Johnson had 6 for 44 yards. All rushed a touchdown.

Does Pittman game plan all four for Saturday’s game against Georgia Southern?

“I think so,” Pittman said. “I think they all bring a little something different to the game. Rocket’s got more of a powerful speed, an edginess to him. Dominique can make you miss. Of course AJ’s really fast. Then Smitty’s Smitty. He’s physical and runs hard and he’s a leader. I think it worked out well the other night.”

It starts with the offensive line. And behind the line it starts with running quarterback KJ Jefferson, Pittman said.

For two games Jefferson logs 19 carries for 162 yards and 2 touchdowns.

“Any time that you have the threat of a guy like that running the football, you’re going to take a few more guys out of the box to the edge,” Pittman said. “It helped us in handing the ball off.”

Groundhog Ferrell was the Virginia born but thoroughly Arkansas trainer for great Frank Broyles football teams and Glen Rose’s basketball teams, while doubling as the Razorbacks baseball coach until his death from cancer in 1967.

Bobby Ferrell began his career in athletics and academics.

He was a teacher and a coach after first serving in the Navy and graduating from the University of Arkansas, before rising to business prominence in Fort Smith for Southwestern Bell and AT&T.

Retiring in 2000 back to Fayetteville, Bobby became a town leader wearing too many Fayetteville civic hats to enumerate. Among others they included City Council alderman and Chamber of Commerce President, plus major involvement in charities and organizations spanning from the Boy Scouts and American Legion, to rescuing abandoned greyhound racing dogs.

Whatever the task or aftermath, Bobby always congenially worked with all amid even decidedly divergent points of view.

The late Eddie Ferrell, one of Bobby’s brothers, followed their dad’s vocational footsteps and was the longtime trainer at Virginia Tech.