Bryant's TJ Lindsey has chance to be special 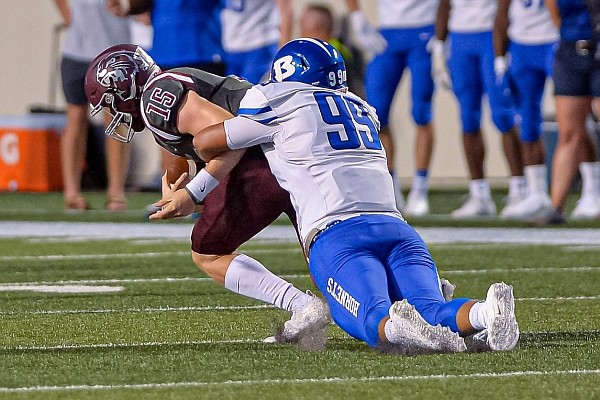 Bryant's Buck James is in his 22nd year as a head coach and believes sophomore defensive lineman TJ Lindsey has a chance to be the best he’s tutored.

“He’s athletic," James said. "The thing he has learn is to bring it every day. He’s got to work hard every day. When he puts his mind to it and he plays hard, he can be a really good football player.

"He needs to marry the weight room and needs to get in great shape and play with good technique. He’s really starting to play better with his hands.”

“He’s probably playing over half the snaps in a game,” James said. “He’s getting better and he’s making plays. He’s shown speed to be able to run down the quarterback or tailback.

"He’s shown glimpses of being able to stand up in the hole and make plays.”

James said Lindsey is very coachable and has a high ceiling.

“To be in the 10th grade and have his physical tools, I think the sky is the limit,” James said.

Lindsey played basketball for the Hornets last season and also played for the 15-under Woodz Elite in the spring and summer. Because of basketball, he didn’t attend any college football camps during the summer.

“He’s going to make his money in football,” James said.