Hogs finding success keeping it on the ground 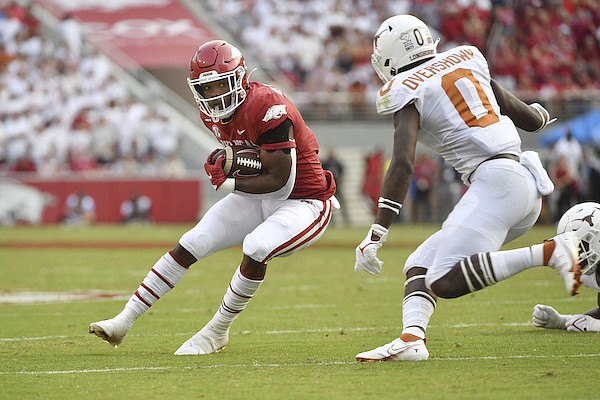 FAYETTEVILLE — The University of Arkansas offense is starting to take shape early in Year 2 for offensive coordinator Kendal Briles, and there’s a growing trend toward the first part of his run-pass option attack.

The Razorbacks bludgeoned No. 15 Texas with 333 rushing yards and averaged 7.1 yards per carry as tailbacks Trelon Smith, Raheim Sanders, AJ Green and Dominique Johnson all scored on the ground.

The old offensive line coach came out in Coach Sam Pittman when he was asked if he’d like to balance that run-game dominance with increased production through the air.

“I think it’s going to take us not to rush for 7 yards a carry. If I’m averaging 7 yards a carry, I’ll never throw the football,” Pittman said, half jokingly.

Of course there will be games when the Razorbacks don’t put up 7 yards per carry. Quarterback KJ Jefferson has shown he can be effective on deep balls with a decent completion rate overall based on his start at Missouri last year. His completion rate is 65% on 26-of-40 passing.

“If we’re averaging 2 [yards per carry], we may light it up,” Pittman said. “I don’t know, but I think that KJ can do that and he’ll only get better. I think it starts with him getting confidence in running the football. It makes us a better football team.”

The No. 20 Razorbacks (2-0) will enter Saturday’s 3 p.m. game against Georgia Southern (1-1) ranked ninth in the nation in rushing with 289 yards per game. Arkansas is second in the SEC in rushing behind Auburn (340.0), though the Hogs have faced much stouter defenses than the Tigers.

“I think we’ve found who we are a little bit,” Pittman said of the offense. “The first game of the year, Rice did such a good job against us, but we found out we’re a little bit better at running at quarterback. And when he runs, he plays better, and our offensive line plays better and everybody plays better.”

Jefferson’s 162 rushing yards rank second on the team behind Smith’s 177. His two rushing touchdowns are tied with Smith and Johnson for the team lead. Jefferson’s 8.5 yards per carry (including 15 yards in losses), rank second behind Green’s 9.6 per carry among players with two or more attempts.

It was clear the Razorbacks wanted to impose their dominance in the trenches on Texas in the big rivalry game last week, in which center Ricky Stromberg and tackles Myron Cunningham and Dalton Wagner graded out the best.

“We knew we had to be the more physical team,” Jefferson said. “Start fast and be physical. Our backs did pretty well, our freshman running backs. The whole running back room did awesome.”

“Just knowing Rick and the O-line, all of them were playing physical and driving them off the ball and playing hard. Me and the running backs just had an awesome night.”

Sanders enrolled in January as a wideout but switched to tailback in spring drills and pushed up to second team during training camp. He said the backs are a tight-knit group.

“Not just me, but everybody in that room, we put that work in,” Sanders said. “We actually talk to each other and get each other better. Nobody is hating in that room. That’s the key thing.

“I feel like when it comes down, if you’re in the room and someone’s hating, it’s not good. Everybody comes every day with the same intensity and getting everybody better, so it was pretty good.”

Cunningham touted the depth at tailback.

“I think the O-line knows any guy that comes in there, there’s no dip in talent or physicalness anywhere,” Cunningham said. “I mean, for them to be hitting the holes like they were against Texas, it only instills confidence in us. As soon as we open the hole, we know they’re going to be right there to hit it.”

Pittman was especially complimentary of the deep running back corps and assistant coach Jimmy Smith’s insistence that the backs make quick decisions on their tracks and get rapidly to cutbacks and second options if the original hole is closed.

That happened time and again on Saturday as the tailbacks combined for 236 rushing yards and one touchdown each.

“I just felt like they were doing a lot of cutting, not going straight to their first read and making some back-side runs and they obviously made some big runs.”

One troubling issue in the Hogs’ otherwise dominant offensive showing against Texas was having to settle for three short Cam Little field goals on drives that pushed inside the 10-yard line, and another 44-yard field goal when Arkansas reached the 26 late in the first half.

“We have to get the right guys on the field that understand what they’re doing. We made too many mistakes, to be honest with you.”

Pittman did not point out the players making the errors but he said most of the drive-stopping mistakes were missed blocking assignments.

“We have to clean that up,” he said. “When we go out and play an SEC team, we have to get those seven points any time we have an opportunity.

“We worked on it for two periods yesterday. Part of that is … I’m not blaming the kids now, I’m blaming me. It has to all get fixed. Part of that is we had some young kids in the game at the time, and it was a learning experience for them, but I’d rather them learn in practice and be right in the game.”