Life is good on The Hill 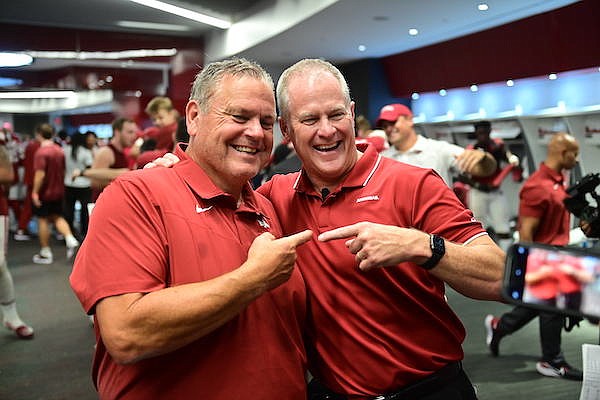 It was exactly what the Arkansas Razorback football program needed. It was what Razorback fans needed, too.

The beauty of sports events is they can’t be scripted. But a better script for what unfolded last Saturday in Reynolds Razorback Stadium couldn’t have been written. On a warm evening in Fayetteville in front of a raucous crowd and a national television audience, Coach Sam Pittman’s Arkansas football team outclassed and thoroughly manhandled the Texas Longhorns from start to finish in a game long-awaited by Razorback fans.

Despite legitimate concerns by some about public health, the stadium was packed and the atmosphere was electric. For the nearly 75,000 people who were at the game, it was a welcome respite from an 18-month pandemic that still continues to frustrate and plague our state and country. A full stadium with the attendant pageantry and the loud, constant roar from the capacity crowd seemed to restore some normalcy to the rhythm of life in Arkansas in the fall.

On the calendar, the Texas game happened to be played on the 20th anniversary of 9/11, a day Americans alive at the time will never forget, as if we could ever forget what we saw on television the morning of Sept. 11, 2001, when the United States was attacked by terrorists, tragically killing nearly 3,000 innocent Americans and forever changing our country.

Inside the stadium on Saturday, the solemnity of the meaning of 9/11 and the palpable excitement and energy of the big game against Texas merged.

To its credit, the university did a nice job prior to kickoff and at moments during the game finding meaningful ways to give the huge crowd a chance to join together as fellow Americans to reflect and properly memorialize those who were lost 20 years ago in New York, Washington and Shanksville, as well as honor our military and first-responders. Fans reveled in the present as they watched the Razorbacks repeatedly run toward the end zone for touchdowns in a dominating win yet collectively paused at times to respectfully pay tribute to the true heroes who ran toward danger on 9/11.

It’s fun to be a Hog fan these days. Every Razorback sports team, both men’s and women’s, is on an upward arc with no limit to what each of them can achieve. For a fan base starving for a return to national relevance, the good ol’ days are back. Hunter Yurachek, who is doing a superb job leading the athletics department, deserves a great deal of credit for making that happen. Yurachek gets it. He understands our state and has everyone on the same page. He clearly found the right basketball coach in Eric Musselman. And now it seems pretty obvious he found the right football coach in Sam Pittman.

After paying his dues and waiting a long time for an opportunity to be a head coach, no one deserved the happiness the win over Texas engendered more than Sam Pittman. It must have been very satisfying for him to see the fans flood onto the field when the game ended and to experience the pride and joy coursing through the locker room afterwards. Yet true to form, Pittman gave all the credit to others.

Arkansas and Pittman are a perfect fit. He’s one of us. This is home for him. He wants to be here and this is where he wants to coach until he retires.

Pittman is “real” in every sense of the word. Plain-spoken, authentic and honest to the core, he is who he is. In today’s world, that’s high praise. Markedly different than so many others in the coaching profession, Pittman is quickly becoming a breath of fresh air for college football.

A coach is only as good as his last game but in short order Coach Pittman has created a winning culture and knows how to build a solid football program, one capable of successfully competing at a high level in the challenging Southeastern Conference. Recruits believe in him. Players believe in and play hard for him. He tells the truth. People trust him. He’s a class act. The University of Arkansas is fortunate to have Pittman at the helm of its football program.

One personal thought about last Saturday’s game. I wish my late father could have been in the stadium to witness the win over Texas. He loved the Razorbacks and detested the Longhorns. He would have wallowed in the victory and would have walked out of the stadium on Cloud 9, just as those of us who were there did.

Woody Bassett is a lifelong Fayetteville resident and a local attorney. Email him at [email protected]