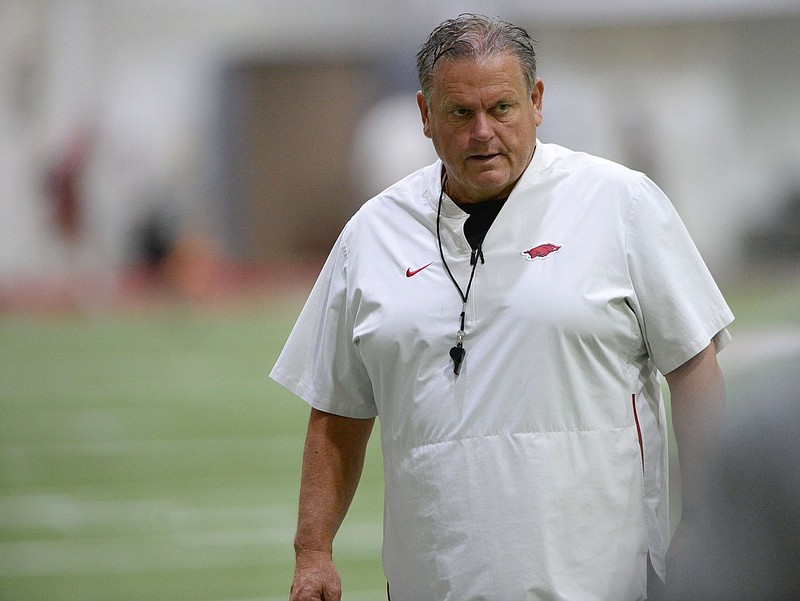 FAYETTEVILLE — University of Arkansas Coach Sam Pittman was not pleased with Tuesday’s practice and he expressed that discontent in a couple of forums on Wednesday.

Speaking on the weekly SEC coaches teleconference, Pittman said, “I didn’t think the intensity was there, what it needed to be, and we’re going to work on that.”

The No. 20 Razorbacks (2-0) are trying to put the applause and accolades of last Saturday’s 40-21 trouncing of Texas behind them and prepare for the tricky Georgia Southern triple option at 3 p.m. Saturday.

“I didn’t think that we had the effort that we’ve had in previous practices, and it wasn’t assignment wise and all those things,” Pittman clarified. “It was effort, and that’s coaching. That’s us and them, so we all have to do a better job, and I believe we will.”

Speaking later on an early afternoon video call, Pittman said he felt even team meetings prior to practice didn’t feel the same.

“I don’t think it’s a wakeup call,” he said. “I showed them yesterday three different teams that had won big games and then the next week got beat by unranked opponents. I just said, ‘Hey, you get the drift in here?’

“We are Arkansas and the way we have had some success is because we rolled up our sleeves and we got to work. We didn’t do that to our standards, which are as high as anywhere in the country, and I have zero doubt that we’ll have a good practice today.”

Pittman said the scout teams, which had to simulate Georgia Southern’s rarely seen option attack, also had something to do with the lackluster Tuesday practice.

“Our scout team was part of the problem yesterday,” he said. “I don’t think we did a great job on either side of the ball on scout team. They’re so valuable to us.”

Because of that, Pittman said parts of Wednesday’s practice would be devoted to ones against twos on both sides of the ball, with second-team quarterback Malik Hornsby running some of the Eagles’ schemes at a faster tempo than the scouts did.

Speaking later on “Sam Pittman Live,” he reiterated that point and gave an update on Wednesday’s practice.

“To be honest with you, I didn’t particularly like Tuesday’s practice by anybody. The scout team, the defense, the offense, nobody. But I liked today.”

The Razorbacks apparently have a minimal list of players who are ailing heading into Saturday’s game.

Coach Sam Pittman said linebacker Grant Morgan, who went out with an apparent knee injury on the first play of the fourth quarter against Texas, has done well in practice.

Morgan wore braces on his knees in Monday’s workout, but the media access on Tuesday was closed shortly before the start of practice.

“Grant’s doing good,” Pittman said. “He practiced the entire time Monday and Tuesday, and we expect him to today. So I think he’s going to be just fine.

“Other guys, I think the rest of them are fine. Off the top of my head, I can’t think of anybody that wouldn’t be available.”

A combination of targeting suspensions and injuries has made it so the Razorbacks have had top three linebackers Grant Morgan, Hayden Henry and Bumper Pool together for only one of the eight quarters through two games. Henry and Pool held a spirited battle for the starting weak-side linebacker spot in camp and they have split the two starts so far, with each serving a first half suspension.

Pittman was asked how he, defensive coordinator Barry Odom and linebackers coach Michael Scherer would allot game reps between those three.

“We have a coaches meeting every Saturday morning and it’s [on] how we’re going to play the plays,” Pittman said. “So in that meeting, if there’s not a whole heck of a lot of difference between this guy, that guy and that guy, it’s really, really easy to stay with the formula you know.”

Pittman said the game-rep plan can get blown up if there is a “significant” difference between players due to inexperience or other factors, or if “all heck is breaking loose on the field, like [against] Rice.”

The Razorbacks amassed four penalties for 40 yards against Texas, a far cry from the 13 flags for 117 yards they compiled in the season opener.

Two of the penalties came on the same Texas drive midway through the second half. Safety Joe Foucha and linebacker Grant Morgan combined for what was ruled a late hit out of bounds on a 4-yard completion to Bijan Robinson late in the third quarter.

Five plays later, on an incomplete third-down pass by Casey Thompson, defensive end Tre Williams was flagged for roughing the passer. The plays extended the Longhorn drive, which ended with Thompson’s 5-yard touchdown run with 13:33 left in the game.

The Razorbacks picked up yet another national honor for their win over Texas on Wednesday, but this was more of the commercial variety.

The student section that revved up the atmosphere for the Reynolds Razorback Stadium crowd of 74,531 during Arkansas’ 40-21 victory was named the Taco Bell Live Was Student Section of the Week.

The Razorbacks’ 40-21 victory, a 19-point spread, was the sixth-largest for Arkansas in the 79-game series against Texas.