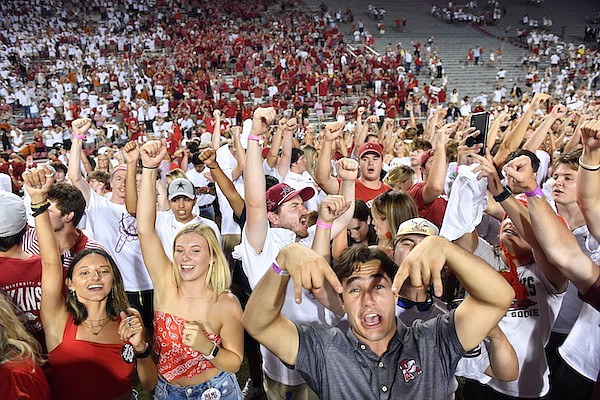 FAYETTEVILLE — Arkansas athletics director Hunter Yurachek called the $100,000 fine incurred from the SEC this week “worth it,” referencing the exposure the moment provided, but also the lack of confrontation between fans and law enforcement that would have been tasked with keeping them off the field.

Yurachek said he did not want to be “flippant” about the dollar amount, but said there was some tradeoff in the amount of exposure the Razorbacks received for the celebration that followed a 40-21 victory over Texas. Several-thousand Arkansas fans ran onto the field immediately following the win, a scene that was shown on highlight shows and shared thousands of times on social media.

Ratings this week estimated an average of 3.4 million people watched the game on ESPN, which is the highest-rated game through two weeks on a cable network.

“I think some of that exposure is because that happened and it happened safely,” Yurachek said of the field rush while speaking to the Hawgs Illustrated Sports Club on Wednesday.

“Having that exposure on a national television, especially those freshman running backs, there have been some companies who have reached out to our student-athlete development coordinator with an opportunity to talk to some of our student-athletes,” Yurachek said. “Those student-athletes being in the spotlight and performing the way they did was huge for them.”

The SEC fined Arkansas for its second violation of the league’s policy that prohibits fans from entering the playing field. The fines range from $50,000 to $250,000 and can accumulate regardless of sport.

The Razorbacks’ previous fine of $25,000 was incurred following a football win over LSU in 2014, one year before fine totals increased. The fine money is added to the SEC’s post-graduate scholarship fund.

Yurachek said he was standing with SEC commissioner Greg Sankey on the field with about 10 minutes remaining in the Texas game.

“I turned to him and said, ‘You know our students are going to rush the field tonight,’” Yurachek said. “He said, ‘Yeah, I assumed that.’

Yurachek, whose conversation with an Arkansas State Police officer just before the field rush was videoed and posted on the Razorbacks’ social media accounts, did not attempt to have law enforcement or game ushers keep fans off the field. On Wednesday he said he learned that lesson the hard way in his previous job.

“If you saw the stands, they started to come down from the top with about two minutes to go. There was not a law enforcement official that I would have wanted to put in front of those students to try to stop them. That was not going to create a good scene for us.