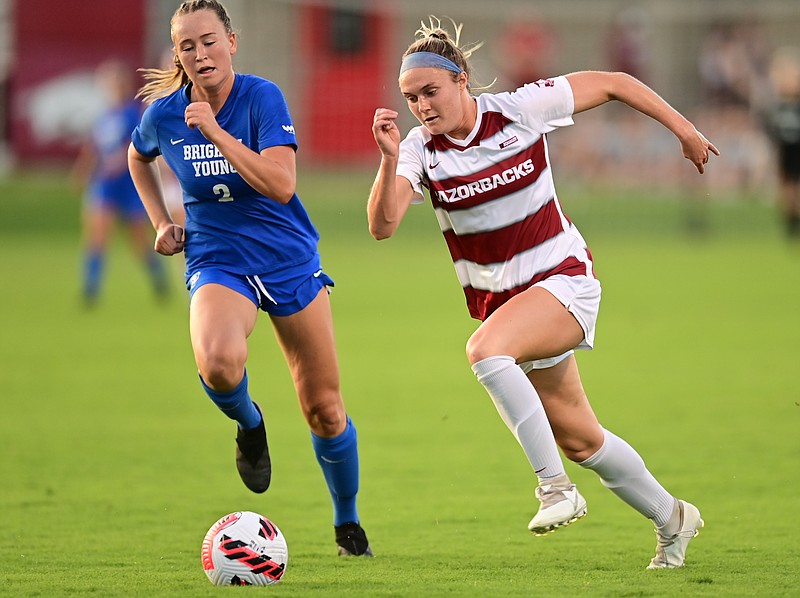 Arkansas' Anna Podojil (right) runs toward the ball during a game against BYU on Monday, Aug. 30, 2021, in Fayetteville.

The Razorbacks (4-2) will take a four-match winning streak into tonight’s SEC opener against undefeated and No. 13 Tennessee at Razorback Field. Kickoff is set for 7 p.m. It will be streamed on SEC Network-Plus.

Arkansas navigated a difficult start to the schedule, losing at Duke and North Carolina — both currently ranked in the top five in the country. But the team has allowed just one goal over the past four, including a 2-0 win over then-No. 24 Brigham Young.

The Razorbacks face a Tennessee team that hasn’t even allowed a goal in its seven victories.

The Lady Volunteers (7-0) are second in the country in shots-per-game, and lead the SEC in shots-on-goal. They also rank 11th in the country in total goals with 25 and are led by Taylor Huff, who leads the team in goals (5) and shots (26).

Hale likened the Lady Vols to BYU, which is currently ranked 18th the United Soccer coaches poll, but acknowledged their schedule probably hasn’t been as difficult as the one Arkansas has faced to this point.

“Tennessee’s a really good team that has some really dangerous attacking players,” Hale said. “They’ve not given up a goal. They’re going to have a lot of confidence.

“Our goal is going to be to create some adversity for them that they haven’t experienced. They haven’t done it yet at Arkansas on a Friday night. It’s gonna be a great game and I’m excited.”

The Razorbacks have enjoyed a homefield advantage recently for sure. They are 15-3-2 in Fayetteville over the past two seasons and 9-4 against ranked opponents since 2016 at home.

Arkansas begins SEC play as the two-time defending regular-season champions. The Razorbacks also tied with Texas A&M as the favorite to win it again in a preseason poll. But those things have little mean now, Hale said.

“It doesn’t really have any bearing on anything really,” Hale said. “Everyone’s 0-0. You got to win games to compete for an SEC championship.