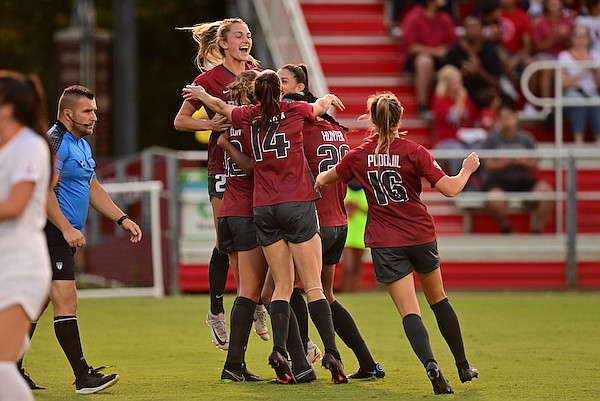 Arkansas players celebrate a goal during a game against Tennessee on Friday, Sept. 17, 2021, in Fayetteville.

FAYETTEVILLE — Arkansas opened SEC play with a 3-1 victory over No. 13 Tennessee on Friday at Razorback Field.

The Lady Vols (7-1) had not allowed a goal prior to Friday, but the Razorbacks (5-2) had no trouble scoring early.

In the fifth minute, Parker Goins slipped a ball behind the backline to Jessica De Filippo, who buried the shot into the bottom corner of past the onrushing keeper. The score was De Filippo’s first goal of the season and of her Razorback career after transferring from Louisville.

Arkansas coach Colby Hale emphasized the importance of scoring quickly against Tennessee. He said he told his team there was no chance Tennessee was going to extend its shutout streak.

“It was a fight,” Hale said “It was intense. The SEC just means more, and I thought we won the fight.”

The Razorbacks doubled their advantage in the 25th minute when Goins lofted a ball into the box full of red jerseys, which snuck in the near post over the keeper’s outstretched hands. The effort was Goins’ fourth goal of the season and 33rd of her career, which ranks fourth all time at Arkansas.

Goins was selected as the first pick of the third round of the NWSL Draft by Racing Louisville FC, but opted to play one last season with the Razorbacks due to the extra season of eligibility afforded because of covid-19.

“I was aiming to cross it,” Goins said of her goal that put the Razorbacks ahead 2-0. “Props to Taylor (Malham) because she was the one who got in front of the goalkeeper and obstructed her vision of the ball.”

Hale could not have asked for a better start to the second stanza when junior forward Anna Podojil scored in the first minute of the restart to put Arkansas ahead 3-0.

The Lady Vols pulled one back in the 60th minute after freshman forward Claire Rain converted a first-time attempt from a low cross around the penalty spot.

Arkansas out-shot Tennessee 10-5. Aside from giving up a goal, the defense held tight and limited the Volunteers to just two other shots on frame in the second half.

After starting the season 0-2 with losses at then-No. 6 Duke and then-No. 3 North Carolina, the Razorbacks have won five consecutive matches and continue their climb back into the national poll conversation.

Tennessee was the second top-25 team to lose at Razorback Field in the past three weeks. Arkansas defeated then-No. 24 BYU 2-0 on Aug. 30.

“That is maybe the two best teams in the country,” Hale said of the two losses in the opening week. “We played those games (in preparation) for this. We have been in fights. (Tennessee) has not."

Arkansas will look to stretch its winning streak to six games when it takes on Tennessee-Martin (4-2-1) on Sunday at 1 p.m. in Fayetteville. The game will be available on SEC Network-Plus.