Field goal oriented: Cam Little kicking for a cause 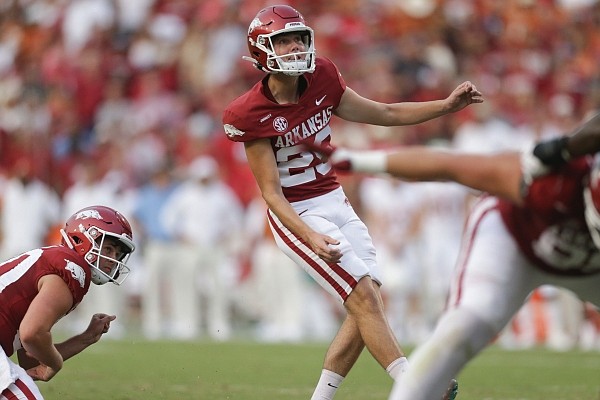 Arkansas' Cam Little (29) kicks a field goal on Saturday, Sept. 11, 2021 during the second quarter of a football game at Reynolds Razorback Stadium in Fayetteville.

FAYETTEVILLE — Like many, Cam Little did not have the strongest arm during his years in elementary school in central Oklahoma.

For some kids, that would be a detriment if they competed in punt, pass and kick competitions and had an eye on first place like he did. But what Cam lacked in arm strength and ability to throw vertically, he more than made up for with a right leg that was advanced for those his age and a few years older.

“It was kind of funny,” Todd Little, Cam’s father, said. “He would always win the events with just his punts and his kickoffs. He didn’t really have to pass to win the events.

“But we never went to national events because he couldn’t throw it that far.”

Inundated with soccer from around the time he was in preschool through late in his high school career, Cam routinely found himself on fields with older groups. Ronda, Cam’s mother, and Todd didn’t mind it.

Their youngest son was a fighter and more than capable of fending for himself.

When Cam was younger, the family traveled all over Oklahoma and Texas for soccer matches. Soon enough, those trips became cross-country journeys as Cam was part of a team that played in a national league.

One year, Todd said, his son’s team earned a fourth-place finish nationally in its age division.

When it was time to consider college and playing soccer at that level, the family took a realistic approach. Todd said Cam was perhaps limited in regards to footspeed, so a Division I route was likely out of consideration. But Division III and NAIA options were left on the table.

That is when Cam, described by both parents as self-driven and goal oriented, set his sights on a Division I football scholarship. He ultimately earned his fair share from schools such as Arkansas, Oklahoma State, Colorado and Nevada, and upon signing with the Razorbacks he became the program’s first scholarship kicker since Cole Hedlund in 2014. 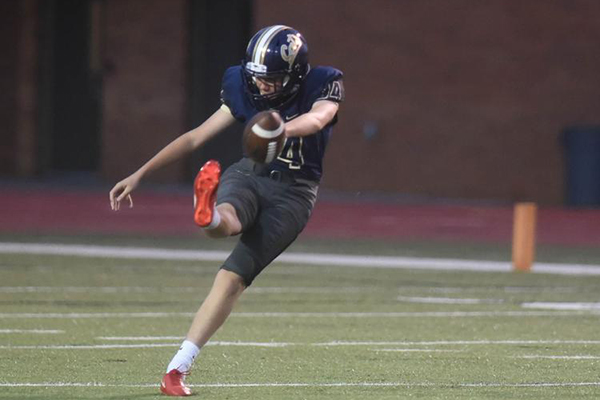 Cameron Little kicks off during a game Friday, Sept. 21, 2018, in Moore, Okla. Photo courtesy of Kyle Phillips of The Norman Transcript.

Recalling Cam’s journey to Arkansas, Todd regularly thinks back to a Monday during football season in his son’s sophomore year at Southmoore High School. Around 4 p.m., his phone rang while at work. It was Cam, and he had news to share.

Coaches had asked him to punt for the junior varsity football team, and they were seeking Todd’s permission before running him onto the field. After giving his approval, Todd had a piece of advice for Cam.

Todd was a basketball player and kicker for a couple of years in high school, but he gave up football during his junior season after his coach tasked him with playing cornerback. On the smaller side back then and at a large high school, he was on the wrong end of a few hits that knocked him out of games.

Speaking from experience, he relayed to Cam, “If they snap it over your head, don’t try to run it. Just fall on it.”

Roughly an hour after Cam’s initial call, Todd’s phone lit up again. His son was calling from the locker room.

“He goes, ‘Dad, I don’t know how to put on my pads,’” Todd said laughing. “He got somebody to help him, and he actually punted that night and kicked off. I guess that Friday night he was punting on varsity.

“He started kicking off his sophomore year in the last four games of the year, and punting. Then he just started really thinking, ‘Man, I’m good at this.’”

Eager to learn and further his talents, Cam began watching instructional videos and YouTube clips of professional kickers, punters and kickoff specialists — the best football had to offer. After attending a number of kicking camps, he blossomed.

Kohl’s Kicking rated him a 5-star punter and kicker, and he was the No. 1 kicker in his class, according to 247 Sports. Accolades, including Central Oklahoma Athletic Conference special teams player of the year as a senior, rolled in.

Through two games with the Razorbacks, Little has been flawless, connecting on all five of his field goal attempts. In Arkansas’ 40-21 victory over Texas, he went 4 for 4, and the highlight of his night was a 44-yard kick that ricocheted through off an upright.

While Cam has brought early stability to a vital aspect of special teams, he is kicking for more than just three points this season. 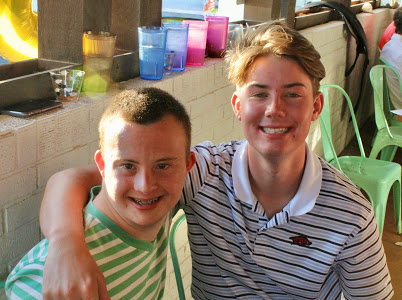 Following the win over the Longhorns, he announced he is donating $10 per made field goal to Down Syndrome Connection of Northwest Arkansas, whose mission since 2002 has been to facilitate inclusion and respect for individuals with Down syndrome within the region, ensuring that they have access to the support and the resources necessary to reach their full potential at all stages of life.

“My little cousin has Down syndrome back in Oklahoma City, and I've grown up around him, hung out with him since I was 5 or 6. He’s 17,” Cam said of Ayden Little. “To give back to an association like that, it's so personal to me. It's great.

“I hope I can make as many kicks to donate as much money to that association as I can.”

Ayden, who is 11 months younger than Cam, was a fixture of support at his cousin’s football games on Friday nights in Oklahoma. Todd added that Cam also volunteered to work Oklahoma City Thunder basketball camps for kids with Down syndrome that Ayden attended.

During the summer months growing up, they saw quite a bit of each other and enjoyed runs for ice cream. Although the two are now in different states, they stay in touch through texting. And Ayden still feels near to Cam thanks to a new Razorback shirt.

“I think it just aligns with who he is,” Ronda said of Cam’s pledge. “He has always been supportive of Ayden and his endeavors and making sure he’s treated no differently than any other kid. He’s got a huge heart for the Down syndrome association and Ayden. He just has grown up with him and spent so much time advocating for him. As far as the act, that doesn’t surprise me, because he thinks that way.

“I’m just hopeful that over the course of this season that they bring value to the organization and awareness to the needs of those individuals. I was happy to support him and happy to contribute. Certainly, you want to give as much as you can to help. If he’s giving, we need to match that.”

Todd and Ronda said they have received countless messages from people with a desire to match Cam’s contributions. His social media accounts were also littered with comments from those looking to donate.

Following a consistent preseason, Cam has the confidence of each teammate and coach on staff, especially Sam Pittman.

“I’ve been really proud of him. He's done a great job.”