'Wasn't that fun?': Hogs D was prepared for option 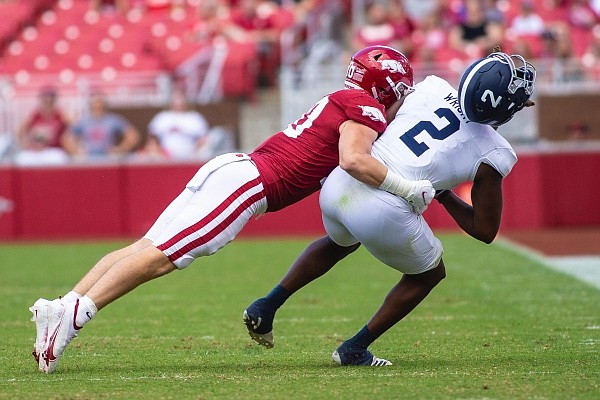 FAYETTEVILLE — If anyone had concerns about a potential Arkansas letdown against Georgia Southern following a signature win against Texas last week, their nerves were likely eased early on on Saturday.

After winning the coin toss and deferring possession to the second half, the Razorbacks sent their defense onto the field first. It set the tone for the remainder of the afternoon.

Outside of a handful of plays, Arkansas grounded the Eagles’ tricky option offense with speed, depth and toughness, and cruised to a 45-10 victory.

Arkansas began game planning for Georgia Southern in August, sprinkling in work for Week 3 every so often in preseason practices. The Razorbacks played like they were properly prepared.

“When we came into preparation this week it was great because we already had a feel of what they were going to do,” said Arkansas safety Jalen Catalon, who finished with a team-high nine tackles and two pass breakups. “And of course you get in the game and they're going to throw different stuff at you that you haven't seen before. You just have to know your rules and just react to it, you know? They had a couple of guys running wide open and stuff like that, and we're going to fix that for sure.

“I think overall we were prepared for this upcoming week for them, and we played the game really well.”

The Razorbacks limited the Eagles to 233 yards of total offense, including 81 through the air. Georgia Southern rushed for 152 yards, but 76 came on a play when quarterback Justin Tomlin evaded a strong rush up the middle and ran alongside the right seam for a touchdown.

The Eagles then added a field goal as time expired in the first half to cap a 12-play, 60-yard series that featured a 19-yard rush and 14-yard completion. Arkansas coach Sam Pittman said he was disappointed with the enthusiasm and finish to the half after jumping ahead 21-0.

At halftime, Catalon said, defensive coordinator Barry Odom took the blame for the Eagles’ touchdown, admitting he made a bad call.

After the break, Odom’s defense was lights out. It forced four punts and a turnover on downs, which allowed Arkansas’ offense to squeeze the life out of Georgia Southern with ball control.

"Wasn't that fun?” Pittman said. “And the guys on the sideline once we put the 2s in there, they wanted that shutout in the second half. The guys went in there and did a really good job and shut them out.”

Arkansas allowed 67 yards of offense — 35 rushing, 32 passing — on the Eagles’ 27 second-half plays. And Georgia Southern went 1 of 7 on third-down tries and completed 4 of 14 passes.

“I guess usually it would be difficult, but going in the preparation was good,” Williams said of facing a triple-option offense. “Our practices were good. The scout team gave a great look, so I was ready for the option. To see and play an offense like that, you have to be assignment sound.

“They can’t lull us to sleep. I think we did a good job.”

It would have been easy for the Razorbacks to overlook Georgia Southern with a CBS showdown against Texas A&M looming. But they didn’t, and Catalon and Pittman were proud of that.

"I thought we played well against the option,” Pittman added. “We were swarming to the ball. I loved the defensive game plan that we had.”