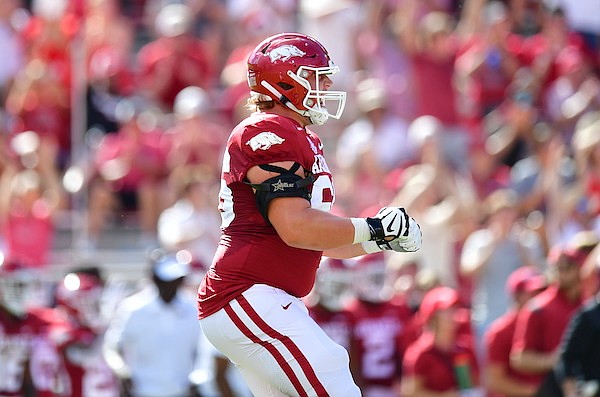 FAYETTEVILLE — University of Arkansas offensive lineman Ty Clary showed his versatility in the Razorbacks’ 45-10 victory over Georgia Southern on Saturday.

Clary, a super senior from Fayetteville who returned to Arkansas for a sixth season of eligibility, didn’t start for the first time this season, but he played three positions on the line because of injuries.

When senior right offensive tackle Dalton Wagner was injured in the first quarter, Clary — who started the first two games at right guard but was replaced by Beau Limmer on Saturday — went in to play right tackle.

Clary played the rest of the first half at tackle, but for the start of the second half he moved to his more familiar spot at right guard with Beau Limmer playing right tackle.

When center Ricky Stromberg was injured in the third quarter, Clary moved to center — where he also has starting experience — and Brady Latham moved from left guard to right tackle with Luke Jones playing left guard.

“Ty, he’s valuable,” Arkansas Coach Sam Pittman said. “We stayed by the book with Ty because we knew he’d be successful. He’s smart and has played a lot of ball.”

Pittman said the coaching staff established before the game who would play where on the line if there were injuries.

“We do this on how you’re going to play the players,” Pittman said. “I knew that [Clary] was going to be the next man over here, next man at center, next man at right tackle.

“I mean, we know that on Saturday morning. I don’t want to be surprised, but more importantly, I want [offensive line coach] Cody [Kennedy] to know where he’s going [with replacements].

“I know it’s silly, but we go all the way to the fifth-team left tackle on who’s going to play. We go four to five guys deep at center just to make sure we’re ready.

“If this thing happens, we’re ready, we’re not going to panic. I want to know this is what we’re going to do.”

Among the starting five, the only lineman who stayed at his same spot until more substitutions were made in the fourth quarter was senior left tackle Myron Cunningham.

Arkansas put together its first 99-yard touchdown drive in 12 years when the Razorbacks took possession at their 1 and 8:42 in the second quarter and took four plays to score on KJ Jefferson’s 14-yard pass to Tyson Morris.

The touchdown was set up by Dominique Johnson’s 48-yard run on the previous play.

The last time Arkansas had gone 99 yards for a touchdown was in a 48-10 victory over Missouri State in the 2009 season opener, which also was quarterback Ryan Mallett’s debut for the Razorbacks after he transferred from Michigan and redshirted.

An interception by Tremain Thomas gave Arkansas possession at its 1.

The Razorbacks then needed 94 seconds to score on Mallett’s 40-yard touchdown pass to Joe Adams that gave Arkansas a 38-10 lead in the third quarter.

Redshirt sophomore Beaux Limmer made his first start of the season at right guard for the Razorbacks, replacing Ty Clary.

It was Limmer’s sixth career start. He made five starts at right guard last season.

Arkansas defensive tackle John Ridgeway, a graduate transfer from Illinois State, made his first career start for the Razorbacks. He started 29 games the previous three seasons for the Redbirds.

Ridgeway was a part of four-man defensive starting from along with Isaiah Nichols, Markell Utsey and Tre Williams.

Members of the UA Sports Hall of Honor for the 2020 and 2021 classes were recognized on the field between the first and second quarter after a an induction banquet Friday night.

Arkansas’ 94-yard touchdown drive that put the Razorbacks ahead 14-0 in the first quarter was helped by two penalties on Georgia Southern.

With Arkansas set to punt on fourth-and-4 from its 12, Georgia Southern’s NaJee Thompson was called for offsides, giving the Razorbacks first down at the 17.

After KJ Jefferson threw an incompletion on a second-and-9 play from the Arkansas 35, Benz Josue was called for roughing the passer to give the Razorbacks a first down at the 50.

Dominique Johnson then capped the 15-play drive with an 11-yard touchdown run.

In the long run

It was the longest run of Tomlin’s career and the longest for Georgia Southern since former Eagles quarterback Favion Upshaw — who is now the team’s running backs coach — went for 80 yards and a touchdown in the Eagles’ 58-27 victory over Bowling Green in the 2015 GoDaddy Bowl.

Tomlin’s run also was the longest play allowed by the Razorbacks this season. The previous long was Rice quarterback Wiley Green’s 41-yard touchdown pass to August Pitre in the opener.

Arkansas freshman running back Dominique Johnson has gained 20 yards on two carries the last two games after the play began with a snap hitting the ground.

On Saturday, quarterback KJ Jefferson picked up the ball and handed it to Johnson, who scored on an 11-yard run.

Last week on a third-and-4 play from the Texas 14 in the Razorbacks’ 40-21 victory, Johnson picked up the snap intended for Jefferson and ran for 9 yards and a first down.

Johnson scored a 5-yard touchdown run on the next play to put Arkansas ahead 10-3.

Georgia Southern, which played Arkansas for the first time, fell to 1-14 against SEC teams.

Georgia Southern lost senior running back Amare Jones to a leg injury in the first half.

Arkansas’ men’s cross country and track and field teams, which swept three SEC championships during the 2020-21 school year, were honored during a timeout in the first half and led the fans in calling the Hogs.

Sprinter Josh Oglesby wasn’t able to be introduced with the track team because he’s also on the football team.

Oglesby, who missed last football season because of a foot injury, had three carries for 17 yards.

Danyelle on the mic

Danyelle Musselman, the wife of Arkansas basketball Coach Eric Musselman, served as the on-field host for announcements during the game. She has extensive experience in an announcing role having previously worked as a sportscaster for ESPN, Fox and the NFL Network.

Former Arkansas All-American running back Darren McFadden, who won the Doak Walker Award and finished second in the Heisman Trophy balloting in 2006 and 2007, will be the featured speaker Monday at the Little Rock Touchdown Club.