No hangover: Hogs roll up 633 yards in rout of Georgia Southern 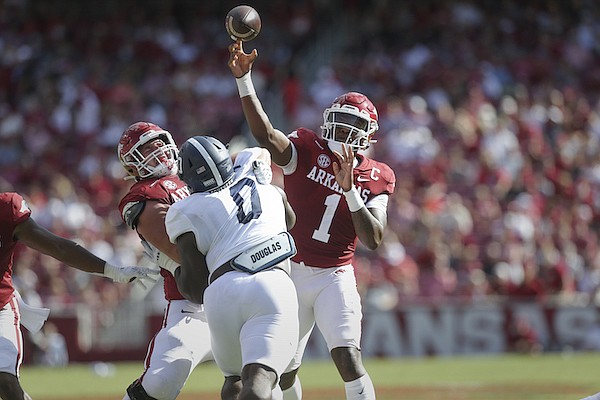 Arkansas quarterback KJ Jefferson (1) passes during a game against Georgia Southern on Saturday, Sept. 18, 2021, in Fayetteville.

FAYETTEVILLE — The University of Arkansas got off stride in the second quarter for a while on Saturday but otherwise avoided a hangover after its huge rivalry win over No. 15 Texas last week.

The No. 20 Razorbacks lit up Georgia Southern for 633 total yards and rolled to a 45-10 victory before a crowd of 66,311 at Reynolds Razorback Stadium.

KJ Jefferson passed for a career-high 366 yards and 3 touchdowns and ace receiver Treylon Burks had a 91-yard catch and run score among his 127 receiving yards to pace the Arkansas attack.

The Arkansas defense did a solid job of limiting Georgia Southern’s tricky triple option and threw a second-half shutout after giving up 10 points in the second quarter.

Arkansas, which converted three touchdown drives of 90-plus yards, including a 99-yarder, out-gained their guests from southern Georgia by 400 yards, 633 to 233.

“Really proud of our defense, the way we were swarming to the ball,” Arkansas Coach Sam Pittman said. “Loved the defensive game plan that we had.”

Jefferson, well protected by his offensive line, connected with Tyson Morris on a 47-yard pass play on the Hogs’ first snap to set the tone. Three plays later, Trelon Smith burst through the line for a 13-yard touchdown and the rout was on.

“We knew we were going to take shots down the field,” Jefferson said. “We came out, started the game fast and wanted to mix it up because the last two games we came out kind of slow with a couple of runs. Trying to keep the defense on their toes, we came out passing the ball down the field.”

The Eagles could not contain Arkansas’ big-play game. The Razorbacks amassed nine running plays of 10-plus yards and eight pass plays of 15-plus yards to account for 471 of their total yards.

Georgia Southern (1-2) sabotaged itself with a handful of dropped passes as well as misfires on several open routes downfield by its quarterbacks.

“If we can build off some positives we’ve had in the three games and try to play better football, we’ve got to try to make it right in the [Sun Belt] conference,” Georgia Southern Coach Chad Lunsford said.

“Right now it’s hard to find positives in the deal. You can find spurts of it. You can find little things you can talk about, but then now you’re getting into moral victories and that ain’t what it’s about. It’s about winning.”

The hard-hitting game sent several starters from both teams out of the action, including Georgia Southern quarterback Justin Tomlin and tailback Amare Jones, who was on crutches with an apparent ankle injury.

The Razorbacks lost a couple of starting offensive linemen, with tackle Dalton Wagner going out in the first half and Ricky Stromberg being injured in the second. Pittman provided no updates on either, and also said Smith, who rushed for 39 yards on eight carries but mostly gave way to a host of reserves in the second half, was nicked up.

“We’re banged up and we’ve got to get healthy,” Pittman said.

Jefferson’s career high 366 yards came on 13-of-23 passing for a robust 28.1 yards per completion and a passer efficiency rating of 233.2, the highest of his career.

“I’m extremely proud of KJ because from where he came from to where he is now, his confidence is out the roof, just like we’ve said about everyone else,” Burks said. “It’s just good to know you’ve got a confident quarterback back there and really ain’t go nothing to worry about.”

Defensively, Jalen Catalon led the way with nine tackles, while Tre Williams had 1.5 sacks but also a pair of roughing the passer penalties.

The Eagles 152 rushing yards but got almost half of that on a Tomlin touchdown run of 76 yards.

“To see and play an offense like that, you have to be assignment sound,” Williams said. “They can’t lull us to sleep. So I think we did a good job.”

Arkansas went 94 yards with its second possession to go up 14-0 with a marathon 15-play march on which Jefferson’s 17-yard keeper and an 18-yard swing pass to tailback AJ Green were the biggest plays. The Razorbacks overcame a holding penalty in the red zone, with Johnson powering for an 11-yard score after Jefferson scooped up a snap off the grass.

Two possessions later, the Razorbacks took over at their 1 after Anthony Beck II’s 54-yard punt rolled dead there.

That was no problem for the Hogs after three runs by Johnson got them out of the shadow of their own goal post and notched a first down. Jefferson found Burks for a 24-yard reception on a hitch and go that could have gone for a score if the pass had hit him in stride. Johnson burst through the middle two plays later, then cut to the left sideline for a 48-yard gain.

Jefferson found Morris for a 14-yard touchdown on a slant on the next play for a 21-0 lead. The 99-yard touchdown drive was the first for Arkansas since a 2009 game against Missouri State.

The Razorbacks’ defense had suffocated Georgia Southern for 29 total yards through five series halfway through the second quarter before the Eagles finally found an answer. Tomlin evaded Arkansas linebacker Bumper Pool in the backfield on a roll-out right, got to the edge and raced 76 yards for a touchdown to make it 21-7.

De’Vion Warren’s 44-yard run on a pop pass behind the line set up Cam Little’s 25-yard field goal with 2:23 left in the half. However, the Eagles put together a nifty two-minute drill, driving 60 yards and scoring on Alex Raynor’s 32-yard field goal on the final play of the half.

Pittman appeared rankled during his halftime interview with the SEC Network after the shaky second quarter.

“I was frustrated at halftime of the Rice game, I was disappointed today,” Pittman said. “We had them down 21-0, then we let them loose on the one long run. We don’t answer the bell there.

“I didn’t think we were in sync on offense. I though we were playing well on defense, but we let the guy loose. So I was just disappointed in the passion. I couldn’t feel it like I normally thought our team plays with. Maybe they were just business as usual.”

Arkansas ended all doubt with an explosive start to the second half.

Jefferson found Warren for a 10-yard gain to convert a third-and-5 play to open the half. On the next snap, Warren Thompson got past cornerback Darrell Baker Jr. down the right sideline and Jefferson dropped a deep ball on him for a 60-yard touchdown.

Another strong punt by Beck had Arkansas backed up to its 8-yard line to start the next sequence.

Jefferson threw a screen pass left to Burks, who picked up key blocks from Morris and tight end Blake Kern, stiff-armed a defender and raced 91 yards to the end zone to make it 38-10.

Playing with second teamers the entire fourth quarter, Arkansas out-scored the Eagles 7-0. Hornsby came in on the first snap of the fourth quarter and polished off a 66-yard drive with a keeper over the right edge to make it 45-10 with 8:22 remaining.