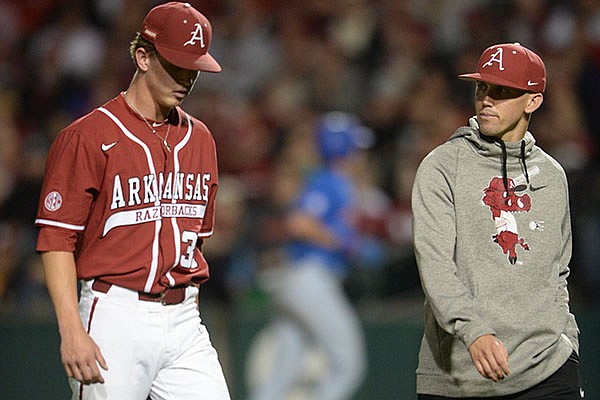 Arkansas pitcher Peyton Pallette (left) walks off the field with trainer Corey Wood after injuring his elbow during a game against Florida on Friday, May 21, 2021, in Fayetteville.

FAYETTEVILLE — Within the next two or three weeks, Peyton Pallette is expected to begin facing live hitters on the same mound where his pitching career came to a pause earlier this year.

It will be a happy moment for Pallette, who feared the worst when he injured his elbow during a game against Florida on May 21, the night Arkansas clinched the SEC regular-season championship at Baum-Walker Stadium.

Arkansas pitching coach Matt Hobbs ran to the mound after Pallette’s fastball velocity dipped into the upper 80s on a series of pitches early in the sixth inning. Pallette could be seen telling Hobbs he had hurt his elbow, and Hobbs motioned for trainer Corey Wood.

“I feel like Hobbs knew something was wrong because my (velocity) was down significantly,” Pallette said. “I didn’t really motion him to come there because I was in so much shock that I didn’t know what to do in the moment.

“I was expecting the worst. That’s every pitcher’s fear. I expected the worst and it was a pretty deep hole I was in, but I overcame it and I feel great now.”

Pallette’s fear of a possible Tommy John surgery was alleviated a few weeks later when it was determined he could rehab the injury by not pitching for six weeks, then slowly working his way back toward throwing off the mound. Wood described Pallette’s injury as a strain to an area of the elbow that is not the ulnar collateral ligament.

Pallette began a throwing program a couple of months ago. Pallette said his routine includes “light catch” two or three days each week and throwing on a flat ground Tuesdays and Fridays.

“Each Friday I throw, it’s like the longest distance I’ve thrown,” Pallette said. “I’ll stretch it out more than I did” the time before.

“We basically just have to put the reins on him,” Wood said. “He could throw in the scrimmage today, but we’re holding him back. Myself and the docs and the coaches, we don’t want him throwing today.”

That should change by late September or early October, a little past the midway point of the Razorbacks’ fall practice season.

“He’s come along real well so far,” Arkansas coach Dave Van Horn said at the beginning of fall practice earlier this month. “He feels great and is throwing the ball extremely well.”

Pallette said he had felt some soreness in his arm leading up to the outing against the Gators in May, but nothing too out of the ordinary.

“I know my arm, so I know when I can pitch and when I can’t,” Pallette said. “Obviously I went out there and pitched, so I knew I could. After that first inning I guess it just tightened up a little more than it usually did. It was just like an electric shock. What the doctors explained to me when I said that, (they said) there was a nerve that went over another nerve that created that electric shock feeling.”

Pallette had an MRI scan at the stadium the night of the injury, so Wood said it was known quickly that it was not related to the UCL, the injury that often requires Tommy John surgery.

Pallette said late May and June were nervous times. He and his family sought further expertise from “four or five” specialists in three states — Arkansas, Texas and California.

Pallette described the final call — no surgery — as “life-changing great news.” Not only would surgery have knocked him out for the Razorbacks’ 2022 season, it would have impacted his draft stock next year.

Baseball America rates Pallette as the No. 5 college prospect in the 2022 draft, and the No. 1 college pitcher.

Pallette sees those rankings, but his focus is on helping his home-state team. The Benton native bounced back and forth between a starter and reliever this year, but has his eyes on earning Arkansas’ top starter position vacated by eighth-round draft pick Patrick Wicklander.

“I want to be that top guy on the team this year,” Pallette said, “carry this team as much as I can, play my role as best I can to get to Omaha and hopefully win a national championship.”

Arkansas spent most of the 2021 season ranked No. 1 and appeared hard to beat before Pallette’s injury. He posted a 4.02 ERA with 67 strikeouts and 20 walks in 56 innings, and appeared to hit his stride as the team’s No. 2 starter during the month of April.

Pallette was up and down in his final three starts against LSU, Georgia and Tennessee, and was penciled in as a reliever for the Florida series to close the regular season. The Razorbacks pitched great the week following Pallette’s injury and won the SEC Tournament, but without Pallette’s innings, the bullpen struggled as it was stretched in the regionals and super regionals.

Arkansas survived a challenge from Nebraska to win the regional, but lost two straight games to North Carolina State in the super regional to come one win shy of playing in the College World Series.

“It was definitely tough,” Pallette said. “I was proud of the team and everything they were doing. I was happy I could be in the dugout supporting them. It was really tough. It was hard to watch, especially that last game not being able to get in there and do my part.”

Pallette said the end of the 2021 season has served as motivation for the returning players. It has shown in the team’s focus so far this fall, he said.

He is looking forward to his own return to the field soon and working toward a better 2022.

“I wasn’t too satisfied with my year last year,” he said. “I kind of expected a little bit more out of myself, because that’s who I am.”