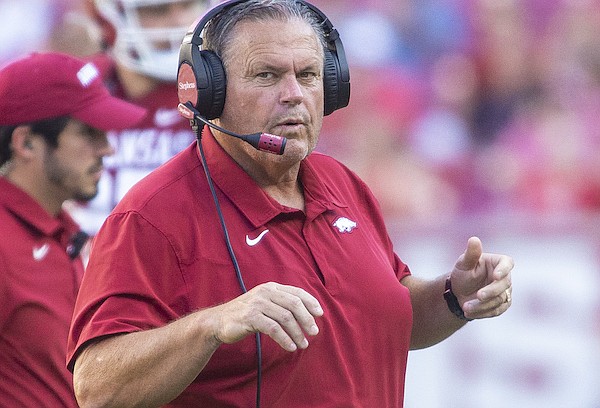 Arkansas coach Sam Pittman is shown during a game against Georgia Southern on Saturday, Sept. 18, 2021, in Fayetteville.

Sam Pittman was not happy at the half and he told an SEC Network audience the Razorbacks had a lot to clean up.

The head coach had every right to be upset.

The Razorbacks led 14-0 after the first quarter and Georgia Southern had run 14 plays for a total of eight offensive yards, including minus-1 rushing.

The Hogs, he said, were inconsistent and they couldn’t stand around on offense and let their quarterback get hit, which they did far too many times.

The Razorbacks could have been leading 35-0. They had 338 yards of offense and Jefferson had passed for 200 yards on 10-of-18 passing, but they lacked the effort and intensity in the second quarter converting only one of our third downs.

Whatever Pittman said to his team at the half inspired them and they held the Eagles scoreless in the second half. They had 67 yards of offense in the final two quarters and only five first downs.

Meanwhile, the Razorbacks offense put the game away in the first five plays of the second half.

Arkansas drove to its 40 on three plays of the first possession of the third quarter, and KJ Jefferson hit Warren Thompson, who used the transfer portal to move out of Florida State, on a 60-yard touchdown.

The defense then held the Eagles and forced a punt that ended up on the Arkansas 9.

On first down, Jefferson hit Treylon Burks who outran the Eagles for a 91-yard touchdown. While there was more than 26 minutes left to play, the Eagles should have started their buses.

It would be remiss to not report that while the Eagles were not as talented, they never quit.

They were well-coached and played hard.

This is a program that back when there was a Division I-AA was feared under head coach Erk Russell.

They earned their big paycheck, but even when they were down 45-10 and Pittman was playing with substitutes, they didn’t take a single down off.

No doubt Pittman was hot, but it could be a big lesson for the Razorbacks as they get ready to open SEC play this Saturday against No. 7-ranked Texas A&M, which is 3-0 after shutting out New Mexico 34-0.

The Aggies lost starting quarterback Haynes King in a win over Colorado, but redshirt freshman Zach Calzada completed 19 of 33 passes for 275 yards and 3 touchdowns.

When they watch the video of Arkansas’ win Saturday they will find a lot to be concerned about.

Jefferson completed 13 of 23 passes for 366 yards and 3 touchdowns, and the Razorbacks used a squad of running backs to get 269 total rushing yards and three touchdowns.

Arkansas hasn’t beaten A&M since Bobby Petrino was pacing the sidelines for the Hogs in 2011.

For three quarters Saturday the Razorbacks dominated, and the one when they didn’t was as much on them as it was the Eagles.

No one was exempt from Pittman’s concern. The offense passed only seven times in the second half and ran 25 times, getting 295 yards of total offense in the final two quarters.

Meanwhile, the defense held the Eagles to just five first downs in the second half. The defense finished with two sacks and four tackles for loss.

In the final two quarters, they swarmed the ball, hit hard, wrapped up and made play after play.

This is still a work in progress, but the last half showed great intensity and improvement.