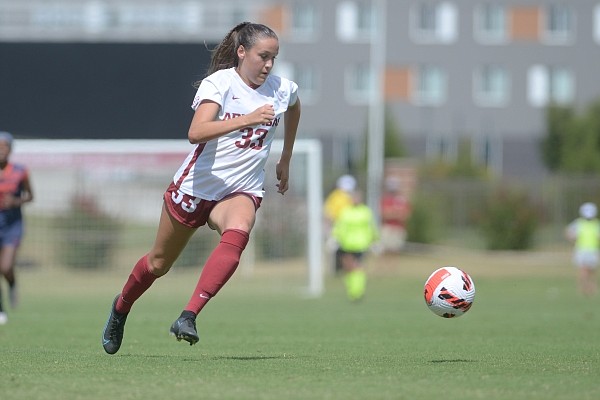 Arkansas forward Sophia Aragon makes a play during the Razorbacks' match against UT-Martin on Sept. 19, 2021 at Razorback Field in Fayetteville.

FAYETTEVILLE — The University of Arkansas women’s soccer team had a slight letdown at the start against Tennessee-Martin, but the Razorbacks put the foot on the gas pedal in the second half en route to a 4-0 win Sunday afternoon at Razorback Field.

The Razorbacks started SEC play with a huge 3-1 win over No. 13 Tennessee on Friday, but Arkansas Coach Colby Hale said the team’s full focus wasn’t there in the opening half against UT-Martin.

“We knew that was possibility and I thought we had some kids step up in the first half that were really good but we said we need everyone in the second,” Hale said. “I thought it was a much better team effort in the second.”

The Skyhawks (4-3-1) hadn’t played in a week since losing 1-0 to Western Carolina, so Hale knew they would be more rested compared to his team.

“We knew that was going to be a challenge,” Hale said. “They were fresh, but I thought we squashed all that and took care of business.

Arkansas (6-2) dominated play overall, outshooting the Skyhawks 25-2. Tennessee-Martin didn’t even attempt a shot until the 65th minute of the 90-minute match. It also managed one shot on-goal.

Jessica De Filippo got the Razorbacks on the board in the 13th minute, netting her second goal in as many matches. She would also connect with Ava Tankersley for Arkansas’ final goal in the 73rd minute.

De Filippo, a transfer from Louisville, said the warm weather could have been a factor in the slow start, but it was a moment to learn.

“I think we for sure wanted to come out stronger than we did,” De Filippo said. “I think the weather played a factor but those are the types of times that we need to fight through and work as a team from the first whistle to get out there and get that first goal.”

The junior forward said the Razorbacks have lofty goals after going to the Sweet 16 last season.

“Every game’s a building block and we have some confidence with us, but we know our end goal is at the end of the season,” De Filippo said. “I think no one’s ever happy with just a victory. We have so many goals in mind. We have so many people coming back and wanting more. We’re trying to make a statement throughout the country.”

Parker Goins added her fifth goal of the season off a perfect feed from freshman Sophie Aragon midway through the first half, while Cora Duininck picked up her first goal as a Razorback in the 62nd minute.

Hale acknowledged his team, which is unranked after six straight wins and two over ranked opponents, is on a bit of a roll with its win over previously undefeated Tennessee. The Lady Vols didn’t allow a goal in their first seven matches, but Arkansas managed three.

“We scored a lot of goals in the last few games and we told the team we’ve got a lotta stuff we’ve got to get better at, but we are getting better,” Hale said. “Every game you can see us get a little better at some stuff and layering stuff in. We’ll continue to work on some stuff this week to keep getting better.”

Arkansas hits the road to take on Texas A&M, which tied with the Razorbacks for the top spot in the SEC preseason poll, at 6 p.m. Thursday, then hosts Ole Miss at 2 p.m. Sunday.