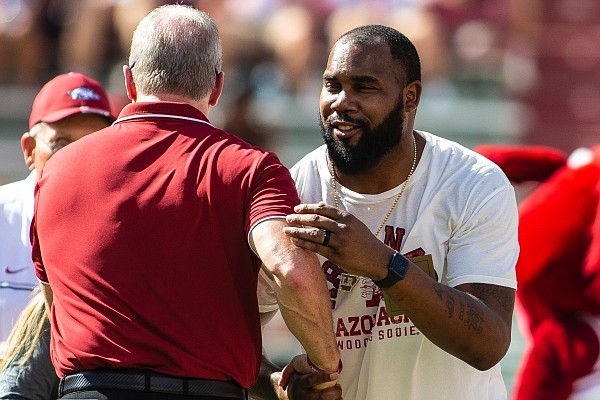 Darren McFadden’s football career at the University Arkansas provided moments that are etched in the memories of Razorback fans, but maybe nothing resonates as loudly as his postgame CBS interview after the Razorbacks’ 2007 upset of No. 1 LSU.

McFadden, guest speaker at the Little Rock Touchdown Club on Monday, was introduced to the crowd of 400 with a video capturing his emotions and that of his head coach Houston Nutt after a 50-48 triple-overtime victory at Tiger Stadium in Baton Rouge.

“We got that wood right here, baby,” McFadden famously said, triggering a roar of cheers at the Doubletree Hotel.

He said he never dreamed that video clip would become so cherished.

“I was so juiced up after the game,” he said. “I was so hyped up seeing him [Nutt] do the interview, I just went over there and yeah, ‘We got that wood.’ ”

“I love it,” McFadden said. “It’s like an iconic moment. It was just so genuine. It wasn’t anything planned or anything like that.”

He accounted for 51 touchdowns in his 38 college games — 41 rushing, 7 passing out of the WildHog formation, 2 receiving and 1 on a kickoff return.

McFadden, 34, played his last game for the Razorbacks on Jan. 1, 2008, but the No. 5 he made famous is still being used — sometimes by players on both sides of the ball.

McFadden, who now lives in the Dallas area, was asked three times Monday about his feelings on the possibility of his No. 5 becoming the third Razorbacks number to be retired, and he was as diplomatic in his answers as he was intense on the field of play.

McFadden told Justin Acri and Wess Moore on KABZ-FM that he has mixed feelings.

He said it makes him proud to see other players wear No. 5, as long as they are representing the Razorbacks the proper way.

He was asked again during a 40-minute Q&A session with LRTDC founder David Bazzel, a former Razorback himself.

“I enjoy seeing the young guys going out there, especially if they’re representing No. 5 the way I did,” McFadden said.

McFadden wasn’t talking about how guys rush the football and how many touchdowns they score.

“For me, I want to see what a running back does without the ball in his hands,” said McFadden, who spent 10 injury-marred years in the NFL (5,421 yards, 24 touchdowns) with the Oakland Raiders and the Dallas Cowboys. “Are you actually going to go and pick up a block over here? Carry out your fake the way you’re supposed to? It’s just about being a football player.”

Being an all-round football player and not just a running back was something Nutt instilled in McFadden.

He admitted to Bazzel that he would be honored if No. 5 were retired.

But he’s not campaigning for it.

“It’s one of those deals where I haven’t made any big fuss about it,” said McFadden, who grew up in Little Rock and attended Pulaski Oak Grovc High School. “I’m just thankful to having been able to go to the University of Arkansas and play the way that I did up there and have the career that I had.

“Going into it, I never thought about going up there and setting records or anything like that. I just wanted to go up there and play for the university.”