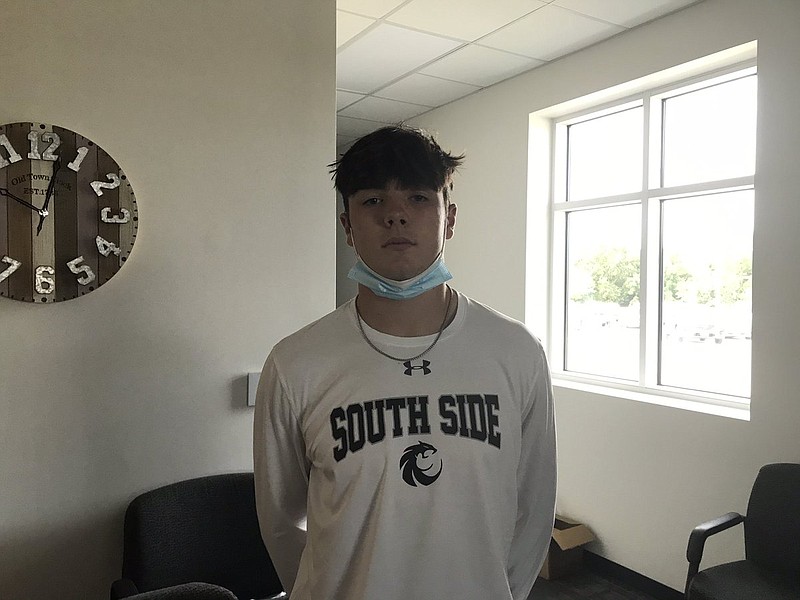 DENTON, Texas — Arkansas hosted one of the nation’s top junior quarterback prospects for an unofficial visit during the Texas game Sept. 11, and he plans to attend the Razorbacks’ game against Texas A&M on Saturday in Arlington.

Jackson Arnold, 6-2, 195 pounds, of Denton (Texas) Guyer has accumulated offers from Arkansas, Tennessee, Ole Miss, Colorado, Notre Dame, Michigan State, Georgia Tech, TCU and others. He is impressed with the direction the program is headed under second-year coach Sam Pittman.

“It was an awesome game to go to. Obviously they won,” Arnold said of the Razorbacks' 40-21 win over Texas in Fayetteville. “It was a great atmosphere. Especially with the stadium being packed for the first time since 2017, it was really awesome to see that. It’s almost like the program got revived that day. Coach Pittman and (offensive coordinator Kendal) Briles are doing a great job over there, and to see them beat a good team like Texas was awesome to see in person.”

The Razorback fans impressed him.

“What they do on kickoffs and after they score — even after first downs they go crazy and the announcer announces a first down," he said. "Just seeing all that was pretty cool.”

One of the highlights during his was seeing the celebration after the game when fans rushed the field.

“In the locker room after they game they were going crazy,” he said. “That was really cool to see.”

Arnold helped the Wildcats to a 4-0 record with a 46-35 victory over Atascocita last week when he completed 29 of 41 passes for 337 yards and 3 touchdowns.

Watching Arkansas quarterback KJ Jefferson lead the offense to 471 and 633 yards the past two weeks — along with having 366 passing yards against Georgia Southern — was appealing to Arnold as a quarterback.

“Just seeing how easily they move the ball against a team like Texas really stood out to me, especially last week after putting up over 600 yards of offense," he said. "KJ was the first (Arkansas) player to pass for over 350 yards and two touchdowns since 2017. It show they’re headed in the right direction.”

Guyer coach Rodney Webb said Arnold comes a great family and it reflects on and off the field.

“I would start with him by talking about what kind of kid he is,” Webb said. “He’s just one of those guys is the face of the franchise. He’s high character, high-class kid. Tremendous personality and leadership skills — all those things you look for in the quarterback position.”

Arnold has the physical and mental talent to excel at his position.

“As a player he’s got the measurables,” Webb said. “He’s got really, really good arm talent. He’s a good decision maker. The game doesn’t happen too fast for him. We put a lot on our quarterbacks in our system. We’re playing at a fast tempo and our quarterback has to call protections to the offensive line. He has to understand running back alignment and then he has to make pre-snap decisions. He has to make decisions on the snap and he has to make decisions post-snap, so it’s a lot to handle and oftentimes we’re limited in this offense by what our quarterback can execute, and in his case there is really no limitation there.”

Arnold’s relationship with Briles is strong.

“I text him almost daily every couple of days,” Arnold said. “I’m calling probably once or twice a week. He’s really good to me and my family, and I’m really appreciative of him.”

He detailed why Arkansas is one of his top schools.

“Just the way they’ve turned the program around,” Arnold said. “Like a couple years ago, Arkansas was kind of seen as a place that was kind of like the laughing stock of the SEC, and you’re seeing Coach Pittman and Coach Briles kind of turn the program around. It really makes me hopeful about the future of Arkansas and what they can provide for me.”

Arnold, who has a 4.5 grade-point average, attended an Arkansas camp in June. His two trips to Fayetteville let him understand why the area is called the "The Hill."

“A lot of hills; very Hilly area, but I’m from Georgia, so I’m kind of used to hills being there, but it was like in actual city,” Arnold said. “It was kind of crazy all the roads are going straight up and straight down.”

“I’ve been really blessed to coach some great ones,” Webb said. “He’ll be the fourth and in a row quarterback that’s been a Division-I player, and what sets him apart is his athletic ability. He has the ability to extend the play. Very, very difficult to sack and he has great speed and great jumping ability.”