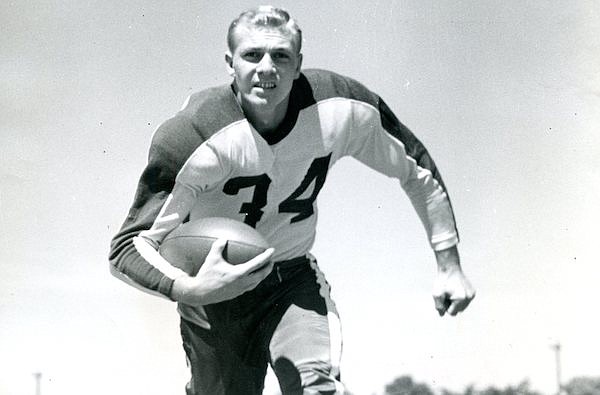 Floyd Sagely was a three-year letterman on Arkansas' football and basketball teams, and in 1953 was All-Southwest Conference as a receiver on the football team.

FAYETTEVILLE — Whether playing on offense or defense for the Arkansas Razorbacks, Floyd Sagely caught the ball.

As a senior in 1953, Sagely led the University of Arkansas and the Southwest Conference with 30 receptions for 542 yards and 3 touchdowns. A first-team All-SWC pick, Sagely also had a team-high three interceptions for the 1953 Razorbacks for 51 return yards.

“I know Floyd Sagely was one of the greatest athletes we’ve ever had at the University of Arkansas,” said Harold Horton, a football player, assistant coach and administrator at Arkansas. “He loved the Razorbacks and he’ll be greatly missed.

"If we had a Razorback function, you knew Floyd was going to be there.”

“There goes the last of the iron men,” Henry Iba, the legendary Oklahoma State basketball coach said when Sagely graduated from the UA, Arkansas Gazette sports columnist Orville Henry wrote of Sagely in 1985.

Sagely, a member of Arkansas’ all-decade football team for the 1950s, played three seasons in the NFL for the San Francisco 49ers and Chicago Cardinals before retiring from pro football to go into the oil and gas business.

Between stints with the 49ers and Cardinals, Sagely served in the U.S. Army at Fort Sill, Okla., for nearly two years.

Among Sagely’s teammates at Arkansas and with the Cardinals was Pat Summerall, a kicker who became a renowned TV sports broadcaster.

“I know Floyd and Coach Broyles played a lot of golf together,” Horton said. “Floyd became a confidant of Coach Broyles.”

Sagely served on the Arkansas State Golf Association’s board for nine years in the 1980s, including being president for three years.

Along with Summerall and Ray Tucker, Sagely started the Arkansas Sports Hall of Fame Golf Tournament in 1999, which has become an annual fund-raising event and is now known as the Pat Summerall Celebrity Golf Classic.

Sagely also was one of the first sponsors of the First Tee program in Fort Smith.

Born in Rudy, Sagely was a four-sport standout at Van Buren High School, where he starred in football, basketball, baseball and track and field. As a baby, Sagely's father was laid off during the Great Depression and he lived with his parents, two grandmothers and four older siblings in a one-room cabin.

According to Henry, Sagely kept a photo of the family standing in front of the cabin in his wallet.

"I keep this picture because it makes me appreciative," Sagely said in 1985.

After graduating from Van Buren, Sagely played in a high school All-America basketball game in Murray, Ky. One of his teammates Bob Petit, who went on to star at LSU and in the NBA for the St. Louis Hawks and became a Pro Basketball Hall of Fame inductee.

After retiring from the NFL in 1958, Sagely started in the oil and gas business as a petroleum landman for various companies. In 1962 he formed his own oil and gas exploration company that continues to operate as Floyd E. Sagely Properties, Ltd., in Fort Smith.

In the mid-1960s, Sagely was one of three founders of the first Fellowship of Christian Athletes organizations in Arkansas. He also coached baseball and basketball with church leagues in Fort Smith; served as Chairman of the Board of Deacons at First Baptist Church; was a Sunday school teacher who served as Chairman of the Board of Trustees of First United Methodist Church; and was on the Fort Smith School Board.

Sagely is survived by his wife of 67 years, Jimmie Lou; son, Floyd E. Sagely Jr., and two grandsons, Weston and Colton Sagely of Fort Smith; and several nieces and nephews.

A private family service will be held.