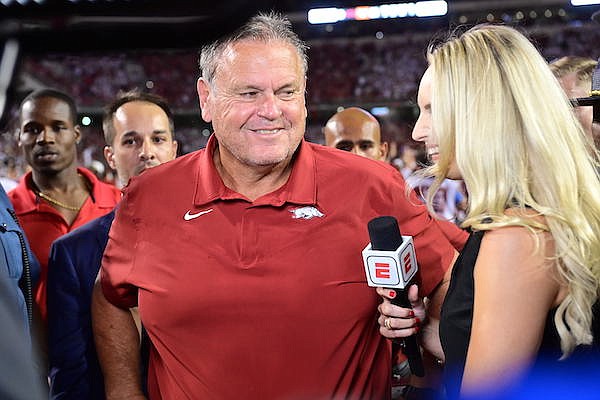 Pittman was a hot commodity immediately before and after the Razorbacks’ dominant win in their retro rivalry with No. 15 Texas two weeks ago, and his requests stacked up again this week with No. 16 Arkansas facing No. 7 Texas A&M on Saturday in the national broadcast for CBS Sports.

Pittman discussed the increased demands on his time this week, praising UA associate athletic director for communications Kyle Parkinson for not overloading him.

“Let me say this, we never do more interviews that we can handle to handle the team,” Pittman said. “Kyle is so good about that. Everything we do fits into a timeframe where I’m OK because I’ve already done everything I need to with the team.”

Pittman has appeared on “The Jim Rome Show,” “College Game Day,” and “Pardon My Take,” the No. 1 sports podcast in the country, and others. He has also done interviews with national outlets like ESPN.com, CMT, CBS Sports and the Washington Post in the last couple of weeks.

“I appreciate the question, and I appreciate you understanding because it has been different and I like it that way,” Pittman said in reference to the Hogs’ 3-0 start and national rankings. “We do have to say no to a few people, and that’s not easy for me.”

Pittman said he recalled a specific moment in his job interview with Athletic Director Hunter Yurachek in December 2019 about media obligations.

“He talked about … how would I be able to interact with that state and the people?” Pittman said. “I remember that was one of the specific questions he asked me in the interview. What are you going to say, ‘No, I can’t do it’? So, I said ‘Yeah, I’m ready to go and can’t wait to meet the folks.’

“He was talking about state media like yourselves. He didn’t mention the national media. Kyle does a great job with me usually getting my [interviews] completed for the most part somewhere between Sunday to Wednesday so I can kind of relax a little bit.”

Dominique Johnson has three touchdowns in 15 carries, a touchdown on every five rushing attempts. He and Trelon Smith are the first Razorback tandem to score rushing touchdowns in three consecutive games since Cedric Cobbs and De’Arrius Howard did it in the first three games of 2003.

“I never thought, and this is not disrespect to him, I never thought, ‘Hey, when we put him in the game I’m going to be overly excited that he’s in there,’” Pittman said. “But I’m excited. I mean, this guy is a good running back. Tough, good blocker. It just goes to show you sometimes you’ve got to wait your turn.”

Texas A&M reserve safety Brian Willams is the brother of former Arkansas tailback Rawleigh Williams III, a 1,360-yard rusher with 12 touchdowns in 2016 after his return from neck surgery, who had to medically retire in 2017.

Arkansas Coach Sam Pittman wanted to clear up on Wednesday some of his remarks from earlier in the week regarding playing this year’s Southwest Classic at AT&T Stadium in Arlington, Texas.

Pittman said on Monday that he “didn’t feel great” about having to go back to Arlington after Texas A&M got a home game last season due to covid-19 protocols.

“It just was unfortunate that it was their year to have a home game, because the bottom line is if we’d had a home game last year, they would have come up and played us because of the situation with covid.”

Arkansas defensive tackle Isaiah Nichols knows the value of a strip sack, when a defensive player knocks the ball free from a quarterback in the pocket, leading to either lost yardage if the offense recovers or obviously a turnover if the defense pounces on the loose ball.

Visiting with the voice of the Razorbacks Chuck Barrett on Coach Sam Pittman’s radio show on Wednesday night, Nichols made that clear.

When Barrett opened a question to Nichols by saying, “You have a sack this year …” Nichols quickly added on “a strip sack.”

When Barrett and the crowd got through laughing, Nichols said the strip-sack was the “money” play for defensive linemen.

KJ Jefferson’s 60-yard touchdown pass to Warren Thompson early in the third quarter traveled 53 yards in the air. Jefferson released the pass from a pristine pocket against a three-man rush at the Arkansas 33. Thompson had a step on Georgia Southern cornerback Darrell Baker and made the catch at the Eagles’ 14. Baker stumbled to the grass as Thompson strolled in for his first Razorback touchdown.

Texas A&M punter Nik Constantinou pulled down SEC Player of the Week honors for his work against New Mexico.

The sophomore from Melbourne, Australia, averaged 45.5 yards on four punts, with all of them being downed inside the Lobos’ 20-yard line, including a 61-yard boot downed at the 5. Three of Constantinou’s punts pinned New Mexico inside its 10-yard line.

“He’s valuable for them,” Arkansas Coach Sam Pittman said. “The other thing, too, is the guy’s boomed 62-, 63-yard punts, too. Got a valuable weapon there.”

Arkansas converted all five of its red-zone possessions into points against Georgia Southern, making the Razorbacks 15 of 16 in that department on the season.

The only drive the penetrated inside the opponent 20-yard line that that did not result in points this season came at the end of the Hogs’ 40-21 win over Texas, when backup quarterback Malik Hornsby executed two kneel downs inside the Longhorns’ 10 to close out the victory.

One of Texas A&M’s longest football traditions is celebrating its 100th anniversary this year. The 12th Man legend, born on Jan. 2, 1922, at the Dixie Classic, is in its 100th year for the Aggies. Texas A&M holds a trademark on the “12th man,” which refers to the first substitute standing ready to enter the game, as well as the crowd.