'Yeah, he's got it': Sanders has long been a special talent 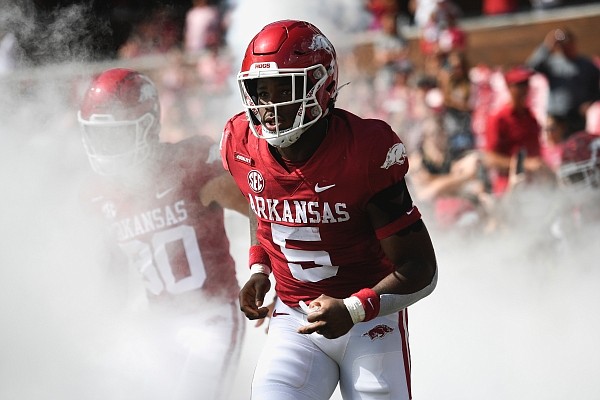 Arkansas running back Raheim Sanders runs onto the field before the Razorbacks' game against Georgia Southern on Sept. 18, 2021 in Fayetteville.

FAYETTEVILLE — On the night Arkansas handily defeated then-No. 15 Texas in Razorback Stadium, the cost of a ride in an Uber or Lyft near campus exceeded $100 in some instances.

The cheapest ride of the weekend came courtesy of Razorbacks freshman running back Raheim Sanders during his 26-yard touchdown run, the first of what many believe will turn out to be a special career.

After taking a handoff moving right, Sanders hit the cutback lane and broke a tackle at the line of scrimmage. At the Texas 6, he collided with Longhorns defensive back B.J. Foster and proceeded to carry him five yards deep into the end zone.

The play, which put Arkansas ahead 33-7 in the third quarter, epitomized not only the Razorbacks’ manhandling of Texas but who Sanders is as a player. And it was the type of sequence that made those who block for him proud.

“Like all of our backs, I like how hard he runs,” offensive lineman Ty Clary said. “I mean, that Texas touchdown where he tried to run through the guy and runs into the end zone, that’s awesome for us to watch as O-linemen. It’s rewarding to us.

“We’re blocking, and to see a running back run so hard like that, it’s awesome.” 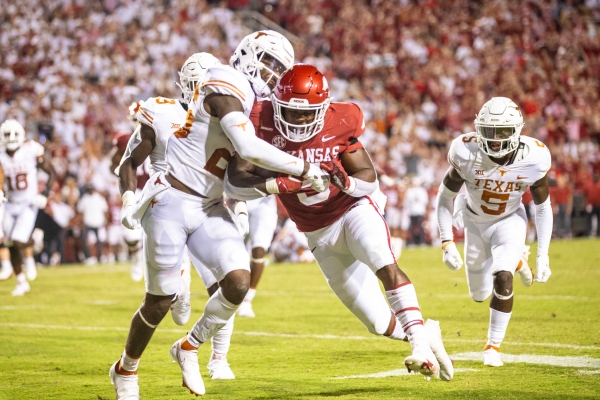 Arkansas’ Raheim Sanders contacts a Texas defender on his first career touchdown run in the Razorbacks’ win over the Longhorns on Sept. 11.

Moments after the score, Sanders took a seat on a stationary bike on the Razorbacks’ sideline, where he was met with congratulations from running back Trelon Smith and offensive lineman Jalen St. John. Then, smiling as he looked toward the in-stadium video board in the north end zone, he confidently said, "That’s what I do.”

Wayne Younger is well aware of all the things the talented young back is capable of with the ball in his hands. His head coach at Rockledge High School in Florida, Younger had a first-class seat on the journey that made Sanders a 4-star prospect, according to 247 Sports and Rivals, who was coveted by the likes of Auburn, Oklahoma and Miami.

Sanders’ mere stature made a strong first impression on the coach. Younger remembers laying eyes on a big, tall and athletic kid who was clearly already taking care of his body.

“I knew once we got him in our weight room and could develop, the sky was the limit for him, for sure,” said Younger, who played college football at Florida International. “He was the same with everything. The work ethic on the field, the weight room, grinding it out, he wanted to develop his body because he knew the results of it was going to help him out.

“Every day in there, he never missed a day. He was always working really hard when he was in there and he was attentive to detail. He really always wants to know why he’s doing something. Once you told it to him, he knew what was going on and how it was going to impact him in a positive way.”

Sanders’ natural ability mixed with steadfast strength and agility training gave way to one of the more impressive individual plays Younger has seen in his career.

With Rockledge set up at its 47, Sanders, then a junior, was targeted on a receiver screen. He caught the pass three yards behind the line of scrimmage, and by the time he was 13 yards downfield he had blown past four Palm Bay defenders and broken an arm tackle.

What happened next (begins at the 30-second mark) is burned into Younger’s memory. And it led to a would-be tackler simply giving up.

“He made probably one of the biggest jump cuts I’ve ever seen and just stayed at top speed and took it to the house,” he said. “That was kind of the moment where I was like, ‘Yeah, he’s got it.’

“He’s a really special talent. We were lucky to have him.”

Younger added that Sanders made a mark on the Rockledge program and at the school, describing him as a joy to coach and a high-character kid who radiated positivity. He also repeatedly mentioned Sanders’ advanced mental approach and work ethic.

Those aspects of his makeup aided him in securing the No. 2 role in Arkansas’ running backs room in his first training camp.

“He has a professionalism at a young age,” Younger said. “He’s extremely mature in the fact that he knows what his goals are, and he’s going to make sure he does whatever he can to make sure he accomplishes those goals. I think he was always like that from Day 1.

“He holds himself to the highest accountability, and his teammates as well. He always makes sure that he sets the example by taking care of his business.”

Razorbacks coach Sam Pittman, discussing Sanders’ business-like demeanor in the preseason, spoke highly of the back’s accountability, noting that he is not a concern when speaking with Arkansas’ academic staff. Sanders is routinely on time, eager to learn and ask questions, and that is how he runs his life. 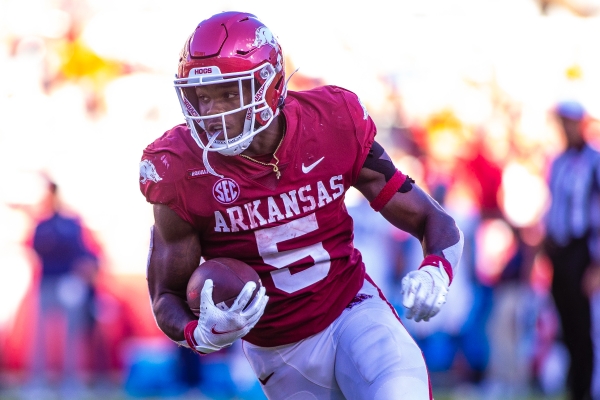 Raheim Sanders carries the ball during Arkansas’ win over Georgia Southern on Sept. 18 in Fayetteville.

Sanders is ultra-competitive on his own, but also driven by his mother, brothers and those who are dear to him. That especially includes his son, RJ, who was born this summer.

“From the day I became your dad my purpose has been to love you, to grind and protect you with everything in me and I give you my word on that, son,” Sanders wrote on his Instagram account in August.

He has certainly run motivated in Arkansas’ first three games. Sanders is second among Razorbacks running backs with 137 yards and a touchdown on 25 carries. On his first career carry against Rice, he rushed to the left end of the line, quickly cut upfield and sought out a defensive back.

Sanders’ play to this point has not been anything Younger didn’t expect.

“The size that he is and his athleticism and his speed, we all thought it would fit very well in the SEC,” he added. “I think he’s going to continue to get better and better each week. To me, always, it was the first step and explosion. It’s unreal. Him being that bigger guy and being an aggressive dude, he doesn’t mind lowering that shoulder.

“Playing in the SEC week in and week out, those big backs … I had a chance to play against Darren McFadden. Just those taller guys that are big, that are fast, you need those kinds of guys in the SEC against that schedule.”

His football gifts were evident early in life, and they earned him a nickname that will likely long outlast his career. Asked earlier this month for the origin story of “Rocket,” he recalled a moment more than a decade old.

“Little league,” Sanders said. “It was little league, when I made my first touchdown. It was like at the age of 7.”

He added that he stopped playing football at 13 or 14 before picking it up again as a high school sophomore. Younger, Pittman and Sanders’ teammates are sure glad he did.

“(Sanders adjusting to the college game) surprised me in the aspect of him being a freshman and making such an impact," offensive lineman Myron Cunningham said. "But him as a person, no, it didn't surprise me.

“As soon as we put on those pads it didn't surprise me what he could do."