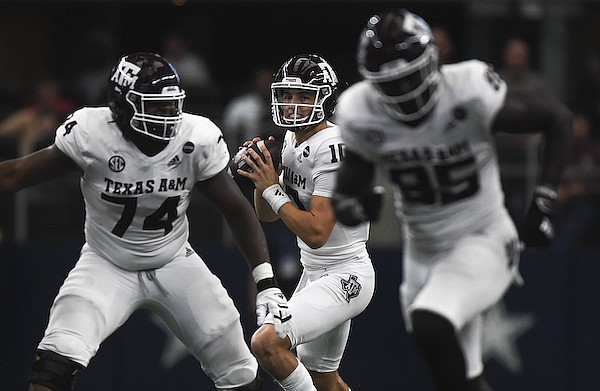 Texas A&M quarterback Zach Calzada (10) looks to pass during a game against Arkansas on Saturday, Sept. 25, 2021, in Arlington, Texas.

After last week’s 38-0 rout of New Mexico, Texas A&M coach Jimbo Fisher warned his team that it was about to face its biggest test of the 2021 season in Arkansas.

That’s exactly what the No. 16 Razorbacks turned out to be on Saturday with a dominating first half before finishing off the No. 7 Aggies 20-10 in the Southwest Classic in Arlington, Texas.

“First of all, I want to congratulate Arkansas,” Fisher said. “They played a very good game, a very physical game and did the things they had to do to win the game, and with the plays they made, they got it going.”

It ended a nine-game losing streak in the series for Arkansas and an 11-game overall winning streak dating back to last season for the Aggies (3-1).

Fisher had praise for Arkansas coach Sam Pittman and his staff.

“It’s the same (players) since I have been here,” Fisher said. “They have a veteran group of guys that knew how to play. They played well, understand their scheme, what they are doing and they are coached very well.

"They played hard and they just played better than we did.”

Arkansas jumped out to a 17-0 lead on Cameron Little’s 46-yard field goal and a pair of K.J. Jefferson touchdown passes – an 85-yard first-quarter strike to Treylon Burks and a 48-yard toss to AJ Green in second quarter.

"We got off to a slow start,” Fisher said. “Like I say, you never win a game in the first half, but you can certainly put yourself behind the 8-ball. That's exactly what we did early in the game.”

Those big plays led to Arkansas having 307 yards of total offense before halftime.

"Defensively, we gave up too many big plays,” Fisher said. “I mean, we give up a 300-yard half. We didn’t tackle well and they hit the big play. I think they only had 12 completions, but 212 yards.”

Isaiah Spiller’s 67-yard touchdown dash with 7:51 left in the third and Jefferson’s exit due to a knee injury gave the Aggies some life, but they could not break through.

“The second drive we pop it and we score and we get it to 17-10 and we are in good shape,” Fisher said. “And we didn’t give up points, but we still gave up drives when we had them pinned back where we could have won some field position battles.”

"We had 11 penalties in the game,” Fisher said. “We self-inflicted ourselves a lot. We didn't play good in that phase and we didn’t play together in the second half when we could have fed off each other and won that field position battle, shorten the field and got some more points.

"We had self-inflicted wounds, and there was nothing they did better," he said. "It was just execution-wise. We have to get back to grabbing every single crumb."

Spiller also believed it was a matter of the Aggies making mistakes.

Fisher was asked about not challenging Arkansas with downfield passing more and noted that the Razorbacks’ defensive alignment did not allow for that.

"We called about six deep shots in the game and we had to check them all down."

Leal was impressed with Jefferson and backup Malik Hornsby, who helped lead Arkansas to a 443-272 yards of total offense advantage.

"Those two guys are amazing QBs,” Leal said. “They had amazing speed, and as QBs, you don't see that speed as much. Props to those guys for coming out and balling."