Fisher knows the Hogs are legit 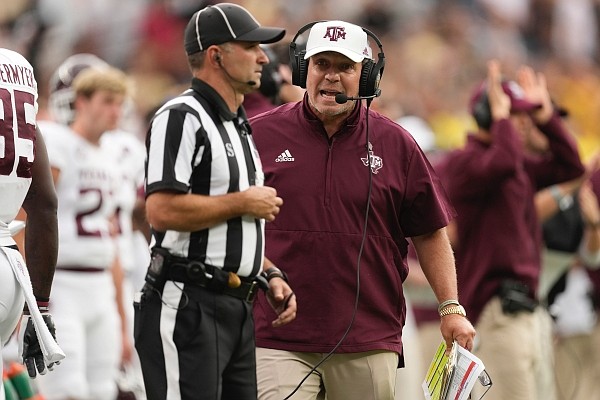 Texas A&M coach Jimbo Fisher argues with a referee in the second half of an NCAA college football game against Colorado in Denver. (AP Photo/David Zalubowski)

Two names not so coincidentally coinciding with the Texas A&M Aggies starting their 9-0 SEC streak over Arkansas heading into today’s game at the Dallas Cowboys’ AT&T Stadium.

Under Bobby Petrino, the Razorbacks went 3-0 over A&M from 2009-2011 upon the old Southwest Conference rivals nonconference reviving their rivalry with A&M then in the Big 12.

Enter the 2012 Aggies into the SEC West. Entering with them quarterback Manziel. A freshman redshirted in 2011 behind current 10-year NFL quarterback Ryan Tannehill, Manziel struggled unsuccessfully in the NFL.

But for A&M Manziel dazzled. He won the 2012 Heisman Trophy and was a 2013 Heisman finalist.

The Aggies romped, 58-10. They’ve beaten Arkansas and its next three coaches ever since.

Yet Jimbo Fisher, in 2018 replacing Kevin Sumlin (2012-2017) as the A&M coach annually beating Arkansas, isn’t speaking coachspeak though this may sound such.

Asked if he fears the streak could cause his Aggies to take Arkansas lightly, Fisher responded, “No, I don’t because all you’ve got to do is watch the film. And even though we have won those games, all those have been incredible football games. Our guys know. They’ve all been four-quarter games, a couple of them up until the last play.”

Last year Sam Pittman’s 3-7 in the SEC Hogs, because of revamped by covid scheduling playing the Aggies at their Kyle Field in College Station instead of the contracted AT&T Stadium neutral site, lost, 42-31. A&M finished 9-1, losing only to national and SEC champion Alabama.

The Aggies, AP voters acknowledged ranking them No. 4 in their season-ending poll, should have been in the 4-team playoff deciding the 2020 national championship.

Pittman knew that playing them in Arkansas’ fifth game.

“They were the best team we played at that time,” Pittman said.

They remained so until Arkansas’ final game routed by Alabama.

Nationally No. 7 and 3-0 with a defense stringing seven shutout quarters, A&M looms tough as ever.

But Arkansas is 3-0, too, and ranks 16th, nationally noteworthy for trouncing then-No. 15 Texas.

“I mean, our guys know (Arkansas) is a heck of a football team,” Fisher said. “The way they are playing right now, I don’t think we will have to worry about that.”