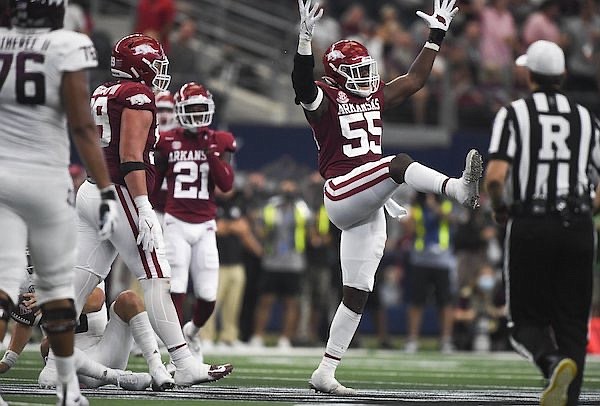 Arkansas defensive end Tre Williams (55) celebrates a sack during a game against Texas A&M on Saturday, Sept. 25, 2021, in Arlington, Texas.

ARLINGTON, Texas — If college football fans weren’t familiar with Tre Williams before Saturday, they are now.

Williams consistently dominated his matchup and the left side of the Texas A&M line Saturday. The edge rusher’s play was critical in routinely knocking young Aggies quarterback Zach Calzada off his spot and slowing what can be an explosive offense.

He assisted No. 16 Arkansas, a 20-10 winner, as it snapped a near-decade-long losing streak in the Southwest Classic.

“All day I felt like the whole game I just had to mix it up on them,” Williams said on the postgame show on Razorback Sports Network. “The whole game it was a different guy coming in.

“I just tried to show them what I can do and just see what their weak points are and get to the quarterback and be effective.”

Williams, one-third of the way through his lone regular season with the Razorbacks, turned in his best performance against the Aggies. He finished with four total tackles — two more than the No. 2 defensive lineman — and a pair of sacks.

Calzada felt heat from Williams on several other occasions. He finished with three of Arkansas’ eight quarterback hurries.

“He rushed well,” Aggies coach Jimbo Fisher said of Williams. “He did (rush well) off the edge. He did. He caused problems, made us step up, get inside on three-man rushes sometimes, too, and did a real nice job.”

Playing in the SEC game of the week on CBS, the impact transfer made an impression on network analyst Gary Danielson, who labeled Williams the player of the game.

With two sacks against Texas A&M, he upped his total to four through four games. He has 11.5 sacks for his career, which is the most among all Razorbacks players.

Pittman concurred with Danielson’s assessment of Williams, saying he was a “big difference in the game.” What fans — and opponents — are seeing now is a healthy player, the coach added.

“Tre really works hard at practice and he works all his different moves and those type things,” Pittman said. “He was beat up a little bit early in the year. He’s really got a nice little swim move on him, a little rip move, and he's fast. Some of the things he couldn't do early in the year is because of health.

“You know, his back was jacked up. His bicep was jacked up a little bit. He's a good football player. I know, because he gave us trouble when I was at Georgia....We had a hard time blocking him when he was a freshman and sophomore.”

In the Razorbacks’ victory over Georgia Southern last week, Williams tallied 1.5 sacks, but his performance was tainted a bit by two penalties as a result of being over-aggressive. Pittman noted those were a concern.

But the end absorbed advice from coaches last week to remain composed in the heat of battle. In addition to his traditional statistics, he caused Texas A&M offensive linemen into three penalties, including on the Aggies' final offensive play from scrimmage.

Despite being held on the play, Williams buried Calzada into the stadium turf shortly after an incompletion and ignited the celebration on the Razorbacks’ sideline.

“That guy can be as good as he wants to be,” said linebacker Grant Morgan, who finished with five tackles and three quarterback hurries. “He's a guy who could easily play at the next level and be successful in the next level.

“Everyone should know Tre Williams' name, just because he's that type of player.”