Razorbacks get their money's worth with Pittman 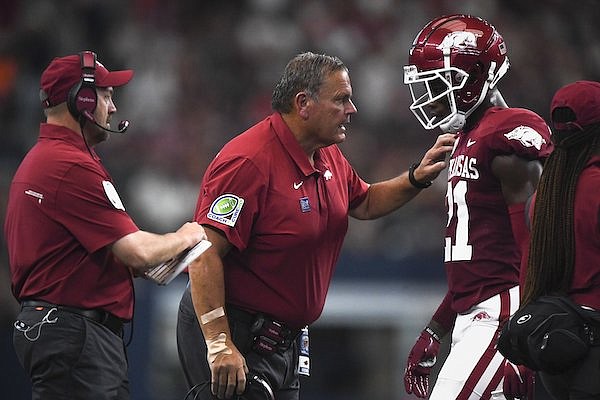 ARLINGTON, Texas — This is no Aggie joke, only a question that will make the richest Texas A&M faithful shake their head in dismay.

When does $3 million beat $9 million?

All in Razorback Nation know the answer: it’s when Sam Pittman is matched against Jimbo Fisher.

Fisher, a terrific coach, has a national championship from his Florida State days, but it seems like he’s a long way from getting what he all but promised when hired four years ago by the Aggies.

Conversely, it’s taken just four games into his second season for Pittman to give the Razorbacks their money’s worth with a 20-10 victory over the No. 7 Aggies in the Southwest Classic at AT&T Stadium.

The Hogs did it with a blue-collar approach that Pittman promised when athletics director Hunter Yurachek hired him with a $3 million annual salary. Fisher received a $1.5 million pay raise during the offseason to bring his annual salary to $9 million.

It was that toughness that Pittman talked about first in his post-game interview.

“Our toughness showed,” Pittman said. “We had some guys hurt....We have a tough team and I’m proud of that.

“Win or lose, I’m proud to have a tough team that prides itself on that. We are very tough.”

With the victory over the Aggies, Pittman lifted the Hogs to their first 4-0 start since 2003.

Linebacker Grant Morgan, one of the toughest Razorbacks, reminded that the Hogs are not just 4-0, but undefeated against three Texas teams. They beat Rice and Texas in the season’s first two weeks.

“We were joking after the game,” Morgan said, “we own Texas now. It’s a good day to be a Razorback.”

Pittman doesn’t brag much, but he came close after the Hogs worked over the Aggies.

It was a physical slugfest, as promised. The Hogs seemed to out-slug the Aggies in the first half.

The Aggies stepped up in the second half, but never could figure out what defensive coordinator Barry Odom was showing up front.

“Barry does such a good job,” said Pittman, who then described the subtle changes in the front deployed each week.

The Hogs widened ends Tre Williams and Markell Utsey and dropped eight. There were slants and stunts with linebackers, and the nickel back filled gaps.

“When we line up, it looks like you can run the ball against it,” Pittman said. “But we run to the ball like crazy. We have three down, then everyone else is scattered around...our linebackers can race to the ball.”

There is the edge setter at nose guard in John Ridgeway, but the secret might be the speed of Williams on the edge. The Missouri graduate transfer had two sacks and drew two holding penalties against the Texas A&M left tackle.

“That guy can be as good as he wants to be,” Morgan said of Williams. “He can play at the next level.”

The No. 16 Razorbacks jumped on the No. 7 Aggies with a 17-0 haymaker in the game’s first 17 minutes, then rode a swarming defense the rest of the way as stars KJ Jefferson and Treylon Burks limped to the finish line.

The defense allowed just 272 yards — 67 of which came on a Isaiah Spiller dash early in the third quarter. The Aggies never snapped the ball from the Arkansas red zone. The other Texas A&M points came on a 49-yard field goal near the end of the first half when the Hogs were playing deeper.

Morgan said the Aggies' only touchdown was on him.

“It was a simple zone and I had the wrong gap,” Morgan said. “Eric Gregory and I played the same gap and I was unblocked.”

Jefferson, the 6-6, 245-pound sophomore quarterback, sustained a knee injury when slung into a bench on the first play of the second half. He returned for a play in the next possession, then toughed it out for the final two Arkansas possessions. He ran twice as the Hogs killed the game’s final 1:58.

The Hogs got a drive for a field goal from backup quarterback Malik Hornsby after a Montaric Brown scoop for an interception at the A&M 48. He completed his only pass as the Razorbacks marched to the Texas A&M 1-yard line before a procedure penalty forced Cam Little to boot a 24-yard field goal to make it 20-10 with 8:39 left.

The Aggies did not make a first down in their last two possessions as half of the crowd of 57,992 celebrated. They flashed downward thumb signs (the reverse of the trademark Aggie gig ‘em) and tossed around downward 'Horn signals, too.

The Razorbacks dominated until the final three minutes of the first half. Up 17-0 and driving for more, the Aggies finally made a big play. They stopped a fourth-and-1, hurry-up plunge by Trelon Smith.

The Aggies had given up a 20-yard pass from Jefferson to Burks on the preceding play and the Hogs hustled to the line at the A&M 22. They wanted to snap the ball before the Aggies were organized, but Smith was tripped for no gain.

The Aggies, after gaining just 88 yards on their first 30 plays, took over at their own 22 with 2:29 left. They marched 46 yards on nine plays to the UA 32 before three straight pass plays failed to gain anything.

Seth Small booted a 49-yard field goal with 21 seconds left in the half.

The Hogs lost only the time of possession in the first half. Texas A&M led in that category, 19:06 to 10:54. The difference was big plays. The Hogs amassed 307 total yards.

They looked dangerous from the start. Smith made 16 yards over left tackle on the first Arkansas play. He made another 25 on the next snap, but Burks was called for holding as Smith streaked past. It looked like a weak call.

Smith bounced outside for 12 before Burks took a Jefferson throw for 23. The Hogs failed on third-and-9 when tight end Blake Kern dropped Jefferson’s throw in the open. Little booted a 46-yard field goal for a 3-0 lead at 8:20 of the first quarter.

"They made plays early in the game," Fisher said. "We didn't get guys down. We were out of gaps; didn't tackle well.

"We didn't tackle in space very well, especially in the first half of the game. We were very poor in our tackling, in my opinion."

Texas A&M kept it for six minutes, but stalled at the Arkansas 34. The Aggies finally punted into the end zone from near midfield.

The Aggies deployed on defense prepared to stop the run, so Jefferson checked to a go route to Burks, one-on-one near the sideline against cornerback Myles Jones. Jefferson hit Burks in stride near the 50 for an 85-yard touchdown play.

The Hogs rolled 82 yards in four plays with their next possession to make it 17-0. A double pass from Warren Thompson to Burks netted 27 on first down. On third-and-3, AJ Green started as a flanker, moved to the backfield, then took a swing pass from Jefferson. He broke three tackles on the 48-yard TD play.

Jefferson said there were great matchups on the two TD passes. He saw the Aggies in man-to-man press coverage on Burks.

“When they are man on (Burks), I know I just have to hold the ball for a second,” Jefferson said. “On the pass to AJ, I saw there was a linebacker on him. I knew we could take advantage of his speed.”

Jefferson’s injury was a bruise to the top of the knee. He went into the injury tent for trainers to apply pain-numbing gel.

“I’m no doctor, but it takes a little bit for that to take effect,” Pittman said. “He knew we needed him at the end.”

Pittman expects Burks to be fine for the trip to Georgia next week. It seems all the Hogs fight back from injuries.

Offensive linemen Ricky Stromberg and Dalton Wagner didn’t miss a snap against the Aggies after sustaining injuries against Georgia Southern.

Pittman was coy with reporters during the week when Stromberg and Wagner missed practice early in the week.

“I don’t lie,” Pittman said, “but I just keep stuff from you.

“We slowly worked in (Stromberg and Wagner) this week. Ricky said he was ready to roll on Wednesday. Wags gave me the thumbs up, too. So I slept well.”

Pittman came to the interview with bandages on his right wrist and hand. His wife, Jamie, made him crack a smile with a question about his injury during his meeting with reporters.

“Someone knocked into me on the sideline,” Pittman said. “I should not have let them (bandage it). The coach is soft.”

That does not seem possible. There is nothing about this Arkansas team that’s soft, especially the head coach.