Van Horn back in Arlington to support friend Pittman 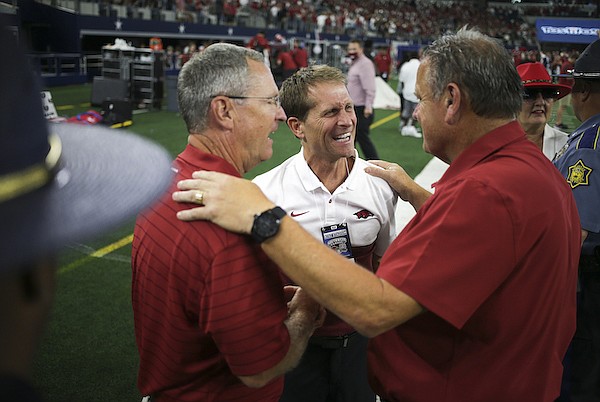 ARLINGTON, Texas — Dave Van Horn, Arkansas’ baseball coach, was on the sideline for the Razorbacks' 20-10 win over Texas A&M on Saturday at the invitation of football coach Sam Pittman.

“Sam and I are pretty good friends,” Van Horn said. “He’s a great supporter of baseball and he knows that I love football.

“He called the other day and said, ‘Man, I really want you to come to the game and hang out on the sideline. I said, ‘I’ll do it.’

Van Horn, who flew to the game with Arkansas Athletic Director Hunter Yurachek, didn’t miss any fall practice by coming to the football game.

“We’re halfway through fall baseball,” Van Horn said. “Our guys needed a weekend off. It just worked out well for me to come to the football game.”

"I really, really appreciate both of them," Pittman said. "It was a special moment for me as head coach to have — I mean, it's Dave Van Horn and Eric Musselman, my God. It was really special for me to have both of them down there."

Arkansas is among the few college baseball programs that generate revenue, but Van Horn understands the importance of the football program bouncing back under Pittman.

The Razorbacks came into Saturday’s game ranked No. 16.

“I think it’s big for the university, it’s big for our athletic department and it’s big for the state for football to have success,” Van Horn said. “I think the fans just want to see the team compete hard, and they’re certainly doing that under Sam.”

Van Horn caught a pass thrown out of bounds by Aggies quarterback Zach Calzada in the second quarter.

Van Horn, who said he was a receiver at Winnetonka High School in Kansas City, Mo., held up the ball as Arkansas fans cheered and chanted his name.