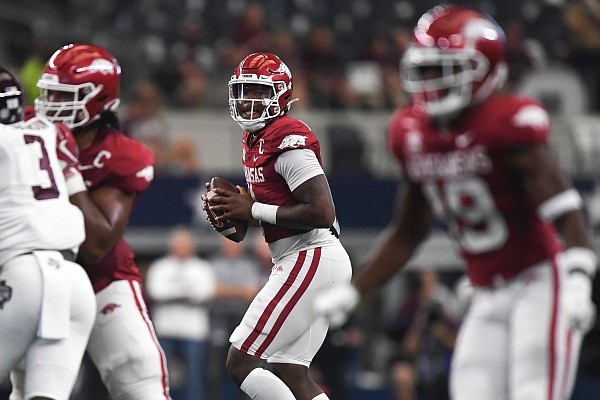 Arkansas quarterback KJ Jefferson (1) looks to pass, Saturday, September 25, 2021 during the second period of a football game at AT&T Stadium in Arlington, Texas.

Below is an analysis of Arkansas quarterback KJ Jefferson’s sixth career start after a re-watch of the Texas A&M game:

Best throw: KJ Jefferson’s deep ball to Treylon Burks for the 85-yard touchdown was an on-the-money throw that hit the receiver in stride 34 yards downfield, but the best single attempt from Jefferson was the back-shoulder completion to Tyson Morris for a 21-yard gain. We have not seen Arkansas try this type of ball often, but it was very well done. It pushed Jefferson to 4 of 4 passing for 144 yards when targeting Morris on throws 16-plus yards downfield.

Worst throw: Jefferson’s final pass, which was intended for Jaquayln Crawford. The quarterback attempted what amounted to a deep ball up the right seam, but Crawford ran in, up and out toward the Aggies' sideline. The incompletion was inconsequential in the grand scheme of the game, but it did stop the clock late in the fourth quarter.

• Incomplete pass intended for Blake Kern at line of scrimmage. Pass was low and hot.

First-down throws on third down: 2

Analysis: KJ Jefferson, with flying colors, has passed his two biggest tests of the season so far. The redshirt sophomore’s deep-ball accuracy got Arkansas off to an ideal start offensively, hitting three passes for gains of at least 21 yards on his first four throws. Two of those attempts went for touchdowns, one to Burks from 85 yards out and the other a modest 5-yarder that turned into a 48-yard play behind a terrific tackle-breaking effort by Green.

Beyond Jefferson’s first five passes, he completed only three balls. But it was more than enough thanks to the Razorbacks' defensive effort and dynamite offensive start that resulted in Arkansas leading 17-0 early in the second quarter.

Jefferson, like in Week 3 vs. Georgia Southern, was at his best throwing the ball downfield. He hit 4 of 6 deep passes for 150 yards and a touchdown. At all other levels of the field, he was 3 of 9. That mark is a bit misleading, however, because the Razorbacks finished with three drops on short throws.

In Arkansas’ last two games, Jefferson has hit 8 of 13 throws 16-plus yards downfield for 302 yards and two touchdowns. He was 4 of 4 for 112 yards on similar throws against Rice and Texas.

I charted Jefferson with four inaccurate passes, one of which went for a completion to Burks in the second quarter, bringing his season total to 14. That average of 3.5 inaccurate throws per game isn’t great, but it isn’t a real concern in my eyes at this point.

Jefferson showed a great deal of toughness in the game, too, leaving in the third quarter with a knee injury and returning midway through the fourth quarter to seal the win. He completed one pass — a big third-down conversion to Thompson — and picked up 19 yards on three carries after re-entering the game. His best play of the game, hands down, was the tough 10-yard first-down run on second-and-9 to end all hope of a comeback for Texas A&M.

That sequence epitomizes the attitude of this Arkansas team and earned Jefferson some points with Razorbacks fans.