Arkansas soccer up to No. 8 in national poll 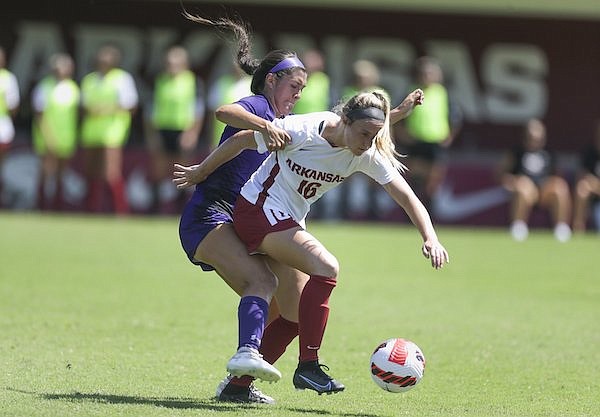 Arkansas' Anna Podojil (16) fights for possession during a game against Stephen F. Austin on Monday, Sept. 6, 2021, in Fayetteville.

FAYETTEVILLE — There is another top-10 team on the University of Arkansas campus.

Like the football team in The Associated Press poll two days earlier, the Razorbacks’ soccer team jumped eight spots to No. 8 in the United Soccer Coaches poll Tuesday. It is Arkansas’ highest ranking in the soccer poll since the Razorbacks were ranked sixth last November.

The Razorbacks were ranked 13th in this year’s preseason soccer poll but fell out following losses at North Carolina and Duke to open the season, and were unranked until last week. Arkansas reentered the poll following a 3-1 home win over previously unbeaten Tennessee on Sept. 17.

The Razorbacks (8-2, 3-0 SEC) defeated Texas A&M 1-0 in overtime and Ole Miss 4-1 in the past week to extend their winning streak to eight games.

Arkansas forward Anna Podojil earned SEC offensive player of the week Monday after she scored three of the team’s five goals in those games. Podojil scored the game winner against the Aggies and twice after halftime — including the go-ahead goal — against Ole Miss.