11 things we learned on Day 1 of Arkansas basketball practice 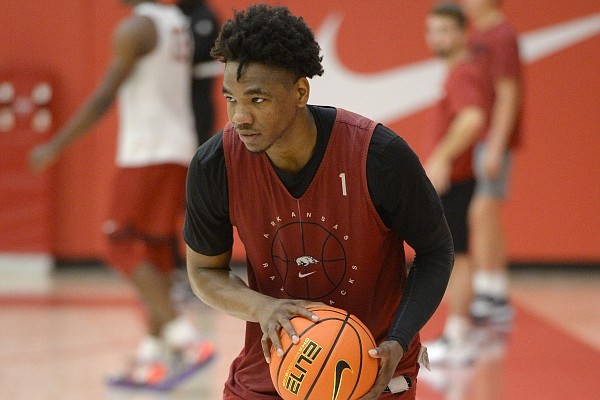 FAYETTEVILLE — Arkansas’ men’s basketball team held its first official practice of the 2021-22 season at the Basketball Performance Center on Tuesday.

• Arkansas is a bit banged up. Several players — KK Robinson, Trey Wade, Jaylin Williams, Au’Diese Toney — were limited or did not take part in Tuesday's practice.

Musselman said Williams is dealing with an ankle injury and should be returning soon, but not within the next 10 days; Wade, who wore a stabilizing brace on his right leg, is out 4-6 weeks with a knee; Robinson is experiencing continued soreness in the foot that forced him to have surgery and miss the back half of last season; and Toney was slowed by a sore knee.

• Davonte Davis’ form and release is much improved on his perimeter jumper. Musselman said Davis is regularly shot ready, his shoulders are more consistently square and he has made headway in becoming a threat beyond the arc. He has progressed nicely, too, shooting off the bounce without drifting one way or the other.

wholehogsports · Basketball: Takeaways from the start of Arkansas' preseason practice

While perfectly fine with Davis adding a three-point shot teams have to account for, Musselman does not want him to get away from what made him so good as a freshman: driving the basketball.

• JD Notae had a terrific offseason. Notae consistently worked this summer with an aim of building on the season he had in 2020-21, and Musselman commended him for that.

“JD has transformed his body better than anybody since I’ve been at Arkansas,” Musselman said. “He’s done an incredible job. He comes in every single night and shoots, and he lifts weights on his own. I don’t know if I’ve ever been around a player that gets three to four lefts on his own at night after he’s already done a lift session with his teammates.

“I think he’s really, really focused to have a great year, and he needs to lead us in a lot of different ways.”

• Stanley Umude had a great summer. Musselman, who is good friends with Umude’s former coach Todd Lee, said the forward is by far the most previously well-coached transfer of all the newcomers, and had less of an adjustment period at Arkansas as a result.

He looked really good in practice Tuesday and shot the ball well. Umude moves and carries himself like a player who has played a lot of college basketball, and he has improved his practice habits.

When asked about Umude, Davis said some people thought he would be a Justin Smith-like player, but he doesn’t necessarily see it that way. Umude, who is 6-6 and was one of top scorers and most-utilized players in the country at South Dakota, is more perimeter oriented than Smith was and a serious pick-and-pop threat.

His three-point shot looks effortless, and he’s solid in isolation situations at the elbows.

• Jaxson Robinson can help this team from deep. The Texas A&M transfer has a good stroke and quick release. He does not need much air space to get off a perimeter look. I think he can and will be a big help to this team as a floor spacer.

• Musselman has identified team weaknesses. In his first year at Arkansas, the Razorbacks were routinely outmatched in terms of size and hit hard on the offensive backboards. Last year, for a stretch of the season, it was the team’s lack of lateral footspeed that jumped out in a negative way.

This year, or six weeks from the season opener at least, Musselman is urging his team to value possession and gain a greater understanding of a good shot. Arkansas greatly improved its shot selection last season, and that was a key reason for its NCAA Tournament run.

And Musselman’s college teams have traditionally been among the best nationally in offensive turnover rate. If you do not take care of the basketball, you will not play.

• Chris Lykes is lightning quick. Most already knew that, but it’s just different checking him out in person. He has the type of speed and explosiveness that can flip a game on its head.

But, Musselman said, he is going to have to learn to play within the staff’s structure a bit better. Right now, he is at his best figuring things out in a broken floor and on the fly. And a must for Lykes is being attentive to detail and nailing down the playbook at multiple positions.

Defensively, I watched him in some drill work and I liked the quick feet and hands he played with. The staff is looking for him to defend his position better this year than in previous seasons.

• Connor Vanover has added some weight. Vanover put in a lot of work prior to last season to bulk up, and he did just that, pushing his weight to around 250 pounds. Then he got sick and never regained what he lost.

Musselman said his strength and conditioning staff tells him Vanover has added some weight since classes began last month.

• Jaylin Williams is going to be a vocal leader. Williams did not do much of anything during Tuesday’s practice other than help make passes in a few post-up denial drills, but he was vocal with teammates. In one instance during the practice, a teammate made a mental error in a drill and Musselman quickly called for Williams to tell the team the correct way to do things.

Williams has a big voice and he found it late in his freshman season around the time Davis found his confidence and swagger. Even on a team littered with college veterans, Williams’ voice will be respected.

• Chance Moore is working to figure out the college game. It was pretty evident in the open portion of practice that there is a learning curve for the freshman. Musselman stopped the workout a couple times to teach/show him a few different things.

In time, Moore will learn how to practice with greater intensity. Great play and effort in practice can put a player on the fast track to a key role on game days. At the moment, it looks like he is kind of gliding through drills at his own pace.

• Musselman sees no negatives with NIL. He added that players were overdue to be paid while still in college and believes Arkansas is in a unique situation in terms of NIL opportunities as the lone high-major school in the state.