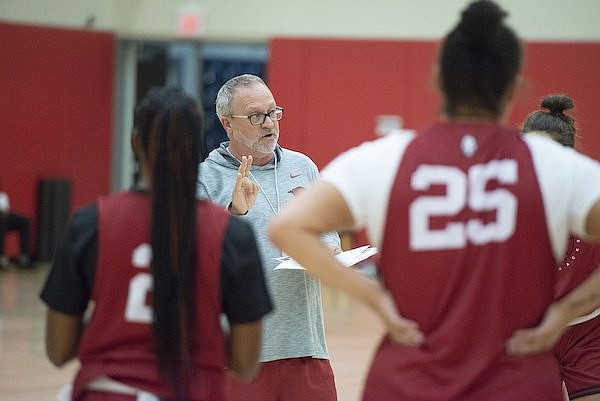 FAYETTEVILLE — The University of Arkansas women’s basketball team had a memorable season come to an abrupt end with an upset loss to Wright State in the opening round of the NCAA Tournament just six months ago.

Amber Ramirez said during a Zoom interview Wednesday on the first official day of practice for the 2021-22 season that the loss was a big part of her motivation for returning for her senior season.

“I think this year we’ll be coming out even hungrier, just to prove we belong in the NCAA Tournament. And to show we can make a run in the tournament.”

But this year’s Razorbacks team will definitely have a different look with five true freshmen and transfer Sasha Goforth on the roster compared to last year’s veteran group.

Arkansas Coach Mike Neighbors said the vibe in practice is a good one.

“It’s a lot of fun right now,” Neighbors said. “Not any more or less fun than some of these veteran teams, just the fact there’s an eagerness, there’s a bright-eyed learning curve that’s going on that’s just a fun to be a part of.

“This team has a little different feel. This is a team that I think they look around as they look each other in the eye they know every single day they’re making each other better.”

Ramirez and junior guard Makayla Daniels are the lone returning starters, but even their roles will change a bit, Neighbors said as both will assume more leadership roles.

Erynn Barnum, a 6-2 redshirt junior from Little Rock, should see more playing time. She played in every game a year ago, averaging 7.7 points and 4.6 rebounds per game in 16 minutes of action.

“I know I’ve been kinda like a role player. … I think I’m due for a big season as well as helping my teammates. I’m experienced now. I do see a difference in my role.”

Junior Marquesha Davis is another who should also see an expanded role. The 6-0 Springdale graduate played 12 minutes a game off the bench last season but has improved her jump shot in the offseason, Neighbors said.

Last year’s team was ranked nationally the entire season, but Neighbors knows the Razorbacks won’t likely see many preseason accolades this time around. And that’s just fine by him.

“I think they’re gonna surprise people that just look at who graduated and who you’re returning and things like that,” Neighbors said. “In women’s basketball, that’s so much of what the preseason magazines do and the preseason polls of which I’m a voter in one of them.

“And I do it. I’m not saying it’s wrong or indifferent. It’s just the way it is. I see why people might think who we graduated — those are some great players. I’m OK with all that.”

“She knows she’s gonna be counted on,” Neighbors said. “I think she knows her role will be very formidable.”

Wolfenbarger, a McDonald’s All-American, got a different basketball experience over the summer being a part of Team USA, which won a gold medal at the U19 World Cup in Hungary. Neighbors said

Because of her long summer, Neighbors said they would limit Wolfenbarger’s reps. She did not practice on Wednesday.

Redshirt freshman Elauna Eaton, another Arkansan, sat out last year because of a knee injury but is making her way back and has an opportunity for minutes, Neighbors said.

The status of Maryam Dauda, a 6-4 freshman from Bentonville, for the coming season is still unknown, Neighbors said. Dauda, another McDonald’s All American, initially signed with Baylor but chose to transfer to Arkansas after Coach Kim Mulkey left for LSU.

Dauda had said she would likely redshirt since she’s still recovering from a torn anterior cruciate ligament in her knee suffered during her senior season in high school.

“If Maryam’s knee continues to heal as rapidly as it has since she’s been on our campus, then we’re not gonna rule anything out,” Neighbors said. “We’ll leave that up to her and the doctors to decide that, but she’s out there every day working … we’ll let her listen to her body.”

Neighbors said freshman Ashlyn Sage, a 6-2 guard from Weatherford, Okla., was “under the weather” and didn’t practice on Wednesday, while Samara Spencer, a 5-9 freshman guard from Fort Lauderdale, Fla., was limited in practice after twisting her ankle earlier.